The distribution of a particular disease is dynamic. Therefore, changes in the environment, the pathogen, or the host population can dramatically impact the spread of a disease. According to the World Health Organization (WHO) an emerging disease (see the figure below) is one that has appeared in a population for the first time, or that may have existed previously but is rapidly increasing in incidence or geographic range. This definition also includes re-emerging diseases that were previously under control. Approximately 75 percent of recently emerging infectious diseases affecting humans are zoonotic diseases, zoonoses, diseases that primarily infect animals and are transmitted to humans; some are of viral origin and some are of bacterial origin. Brucellosis is an example of a prokaryotic zoonosis that is re-emerging in some regions, and necrotizing fasciitis (commonly known as flesh-eating bacteria) has been increasing in virulence for the last 80 years for unknown reasons. 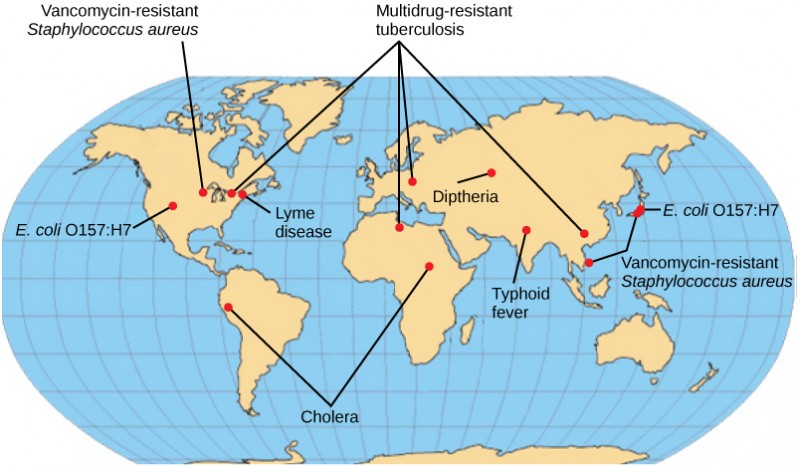 The map shows regions where bacterial diseases are emerging or reemerging. (credit: modification of work by NIH)

Some of the present emerging diseases are not actually new, but are diseases that were catastrophic in the past (see the figure below). They devastated populations and became dormant for a while, just to come back, sometimes more virulent than before, as was the case with bubonic plague. Other diseases, like tuberculosis, were never eradicated but were under control in some regions of the world until coming back, mostly in urban centers with high concentrations of immunocompromised people. The WHO has identified certain diseases whose worldwide re-emergence should be monitored. Among these are two viral diseases (dengue fever and yellow fever), and three bacterial diseases (diphtheria, cholera, and bubonic plague). The war against infectious diseases has no foreseeable end.

Lyme disease often, but not always, results in (a) a characteristic bullseye rash. The disease is caused by a (b) Gram-negative spirochete bacterium of the genus Borrelia. The bacteria (c) infect ticks, which in turns infect mice. Deer are the preferred secondary host, but the ticks also may feed on humans. Untreated, the disease causes chronic disorders in the nervous system, eyes, joints, and heart. The disease is named after Lyme, Connecticut, where an outbreak occurred in 1995 and has subsequently spread. The disease is not new, however. Genetic evidence suggests that Ötzi the Iceman, a 5,300-year-old mummy found in the Alps, was infected with Borrelia. (credit a: James Gathany, CDC; credit b: CDC; scale-bar data from Matt Russell)