Antibiotics: Are We Facing a Crisis?

Antibiotics: Are We Facing a Crisis?

The word antibiotic comes from the Greek anti meaning “against” and bios meaning “life.” An antibiotic is a chemical, produced either by microbes or synthetically, that is hostile to the growth of other organisms. Today’s news and media often address concerns about an antibiotic crisis. Are the antibiotics that easily treated bacterial infections in the past becoming obsolete? Are there new “superbugs”—bacteria that have evolved to become more resistant to our arsenal of antibiotics? Is this the beginning of the end of antibiotics? All these questions challenge the healthcare community.

See this 2015 news report on the problem of routine antibiotic administration to livestock and antibiotic-resistant bacteria.

One of the Superbugs: MRSA

The imprudent use of antibiotics has paved the way for bacteria to expand populations of resistant forms. For example, Staphylococcus aureus, often called “staph,” is a common bacterium that can live in the human body and is usually easily treated with antibiotics. A very dangerous strain, however, methicillin-resistant Staphylococcus aureus (MRSA) has made the news over the past few years (see the figure below). This strain is resistant to many commonly used antibiotics, including methicillin, amoxicillin, penicillin, and oxacillin. MRSA can cause infections of the skin, but it can also infect the bloodstream, lungs, urinary tract, or sites of injury.

While MRSA infections are common among people in healthcare facilities, they have also appeared in healthy people who haven’t been hospitalized but who live or work in tight populations (like military personnel and prisoners). Researchers have expressed concern about the way this latter source of MRSA targets a much younger population than those residing in care facilities. The Journal of the American Medical Association reported that, among MRSA-afflicted persons in healthcare facilities, the average age is 68, whereas people with “community-associated MRSA” (CA-MRSA) have an average age of 23. 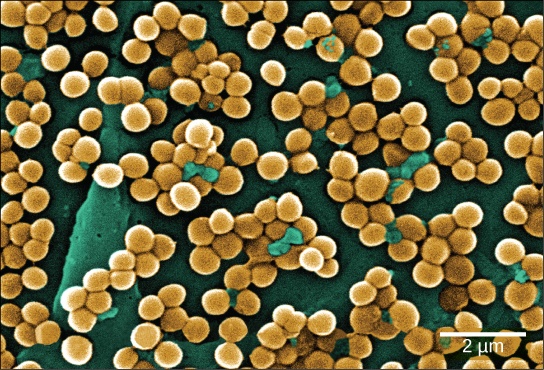 This scanning electron micrograph shows methicillin-resistant Staphylococcus aureus bacteria, commonly known as MRSA. S. aureus is not always pathogenic, but can cause diseases such as food poisoning and skin and respiratory infections. (credit: modification of work by Janice Haney Carr; scale-bar data from Matt Russell)

In summary, the medical community is facing an antibiotic crisis. Some scientists believe that after years of being protected from bacterial infections by antibiotics, we may be returning to a time in which a simple bacterial infection could again devastate the human population. Researchers are developing new antibiotics, but it takes many years to of research and clinical trials, plus financial investments in the millions of dollars, to generate an effective and approved drug.