Energy is required by all living organisms for their growth, maintenance, and reproduction; at the same time, energy is often a major limiting factor in determining an organism’s survival. Plants, for example, acquire energy from the sun via photosynthesis, but must expend this energy to grow, maintain health, and produce energy-rich seeds to produce the next generation. Animals have the additional burden of using some of their energy reserves to acquire food. Furthermore, some animals must expend energy caring for their offspring. Thus, all species have an energy budget: they must balance energy intake with their use of energy for metabolism, reproduction, parental care, and energy storage (such as bears building up body fat for winter hibernation).

Animals with this strategy are often self-sufficient at a very early age. This is because of the energy tradeoff these organisms have made to maximize their evolutionary fitness. Because their energy is used for producing offspring instead of parental care, it makes sense that these offspring have some ability to be able to move within their environment and find food and perhaps shelter. Even with these abilities, their small size makes them extremely vulnerable to predation, so the production of many offspring allows enough of them to survive to maintain the species.

Animal species that have few offspring during a reproductive event usually give extensive parental care, devoting much of their energy budget to these activities, sometimes at the expense of their own health. This is the case with many mammals, such as humans, kangaroos, and pandas. The offspring of these species are relatively helpless at birth and need to develop before they achieve self-sufficiency.

Plants with low fecundity produce few energy-rich seeds (such as coconuts and chestnuts) with each having a good chance to germinate into a new organism; plants with high fecundity usually have many small, energy-poor seeds (like orchids) that have a relatively poor chance of surviving. Although it may seem that coconuts and chestnuts have a better chance of surviving, the energy tradeoff of the orchid is also very effective. It is a matter of where the energy is used, for large numbers of seeds or for fewer seeds with more energy.

The timing of reproduction in a life history also affects species survival. Organisms that reproduce at an early age have a greater chance of producing offspring, but this is usually at the expense of their growth and the maintenance of their health. Conversely, organisms that start reproducing later in life often have greater fecundity or are better able to provide parental care, but they risk that they will not survive to reproductive age. Examples of this can be seen in fishes.

Small fish like guppies use their energy to reproduce rapidly, but never attain the size that would give them defense against some predators. Larger fish, like the bluegill or shark, use their energy to attain a large size, but do so with the risk that they will die before they can reproduce or at least reproduce to their maximum. These different energy strategies and tradeoffs are key to understanding the evolution of each species as it maximizes its fitness and fills its niche. In terms of energy budgeting, some species “blow it all” and use up most of their energy reserves to reproduce early before they die. Other species delay having reproduction to become stronger, more experienced individuals and to make sure that they are strong enough to provide parental care if necessary.

Some life history traits, such as fecundity, timing of reproduction, and parental care, can be grouped together into general strategies that are used by multiple species. Semelparity occurs when a species reproduces only once during its lifetime and then dies. Such species use most of their resource budget during a single reproductive event, sacrificing their health to the point that they do not survive. Examples of semelparity are bamboo, which flowers once and then dies, and the Chinook salmon (see figure (a) below), which uses most of its energy reserves to migrate from the ocean to its freshwater nesting area, where it reproduces and then dies. Scientists have posited alternate explanations for the evolutionary advantage of the Chinook’s post-reproduction death: a programmed suicide caused by a massive release of corticosteroid hormones, presumably so the parents can become food for the offspring, or simple exhaustion caused by the energy demands of reproduction; these are still being debated.

Iteroparity describes species that reproduce repeatedly during their lives. Some animals are able to mate only once per year, but survive multiple mating seasons. The pronghorn antelope is an example of an animal that goes into a seasonal estrus cycle (“heat”): a hormonally induced physiological condition preparing the body for successful mating (see figure (b) below). Females of these species mate only during the estrus phase of the cycle. A different pattern is observed in primates, including humans and chimpanzees, which may attempt reproduction at any time during their reproductive years, even though their menstrual cycles make pregnancy likely only a few days per month during ovulation (see figure (c) below). 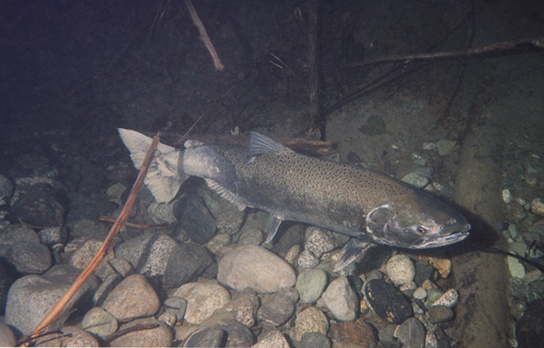 The Chinook salmon mates once and dies. (credit: modification of work by Roger Tabor, USFWS) 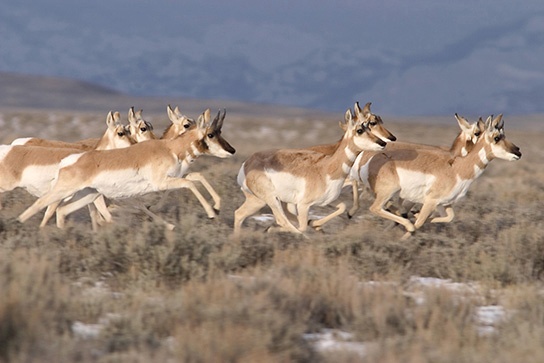 The pronghorn antelope mates during specific times of the year during its reproductive life. (credit: modification of work by Mark Gocke, USDA) 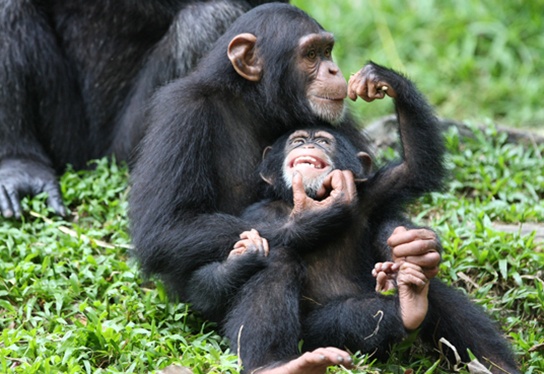 Primates, such as humans and chimpanzees, may mate on any day, independent of ovulation. (credit: modification of work by “Shiny Things”/Flickr)

Research into how animals allocate their energy resources for growth, maintenance, and reproduction has used a variety of experimental animal models. Some of this work has been done using the common fruit fly, Drosophila melanogaster. Studies have shown that not only does reproduction have a cost as far as how long male fruit flies live, but also fruit flies that have already mated several times have limited sperm remaining for reproduction. Fruit flies maximize their last chances at reproduction by selecting optimal mates.

In a 1981 study, male fruit flies were placed in enclosures with either virgin or inseminated females. The males that mated with virgin females had shorter life spans than those in contact with the same number of inseminated females with which they were unable to mate. This effect occurred regardless of how large (indicative of their age) the males were. Thus, males that did not mate lived longer, allowing them more opportunities to find mates in the future.

More recent studies, performed in 2006, show how males select the female with which they will mate and how this is affected by previous matings (see the figure below). Males were allowed to select between smaller and larger females. Findings showed that larger females had greater fecundity, producing twice as many offspring per mating as the smaller females did. Males that had previously mated, and thus had lower supplies of sperm, were termed “resource-depleted,” while males that had not mated were termed “non-resource-depleted.”

The study showed that although non-resource-depleted males preferentially mated with larger females, this selection of partners was more pronounced in the resource-depleted males. Thus, males with depleted sperm supplies, which were limited in the number of times that they could mate before they replenished their sperm supply, selected larger, more fecund females, thus maximizing their chances for offspring. This study was one of the first to show that the physiological state of the male affected its mating behavior in a way that clearly maximizes its use of limited reproductive resources.

Male fruit flies that had previously mated (sperm-depleted) picked larger, more fecund females more often than those that had not mated (non-sperm-depleted). This change in behavior causes an increase in the efficiency of a limited reproductive resource: sperm.

These studies demonstrate two ways in which the energy budget is a factor in reproduction. First, energy expended on mating may reduce an animal’s lifespan, but by this time they have already reproduced, so in the context of natural selection this early death is not of much evolutionary importance. Second, when resources such as sperm (and the energy needed to replenish it) are low, an organism’s behavior can change to give them the best chance of passing their genes on to the next generation. These changes in behavior, so important to evolution, are studied in a discipline known as behavioral biology, or ethology, at the interface between population biology and psychology.