Communities are complex entities that can be characterized by their structure (the types and numbers of species present) and dynamics (how communities change over time). Understanding community structure and dynamics enables community ecologists to manage ecosystems more effectively.

Foundation species are considered the “base” or “bedrock” of a community, having the greatest influence on its overall structure. They are usually the primary producers: organisms that bring most of the energy into the community. Kelp, brown algae, is a foundation species, forming the basis of the kelp forests off the coast of California.

Foundation species may physically modify the environment to produce and maintain habitats that benefit the other organisms that use them. An example is the photosynthetic corals of the coral reef (see the figure below). Corals themselves are not photosynthetic, but harbor symbionts within their body tissues (dinoflagellates called zooxanthellae) that perform photosynthesis; this is another example of a mutualism. The exoskeletons of living and dead coral make up most of the reef structure, which protects many other species from waves and ocean currents. 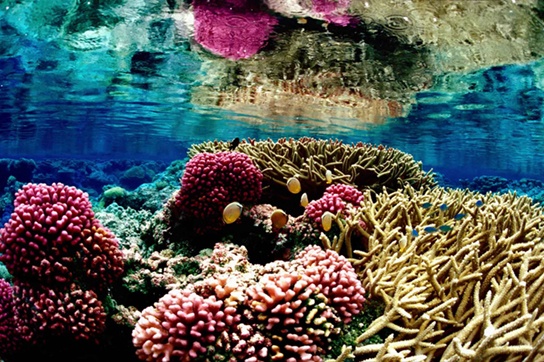 The lowest species richness occurs near the poles, which are much colder, drier, and thus less conducive to life in Geologic time (time since glaciations). The predictability of climate or productivity is also an important factor. Other factors influence species richness as well. For example, the study of island biogeography attempts to explain the relatively high species richness found in certain isolated island chains, including the Galápagos Islands that inspired the young Darwin. Relative species abundance is the number of individuals in a species relative to the total number of individuals in all species within a habitat, ecosystem, or biome. Foundation species often have the highest relative abundance of species. 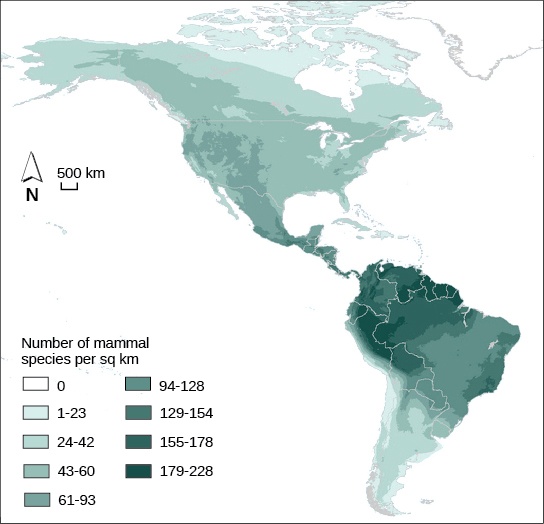 The greatest species richness for mammals in North and South America is associated with the equatorial latitudes. (credit: modification of work by NASA, CIESIN, Columbia University)

A keystone species is one whose presence is key to maintaining biodiversity within an ecosystem and to upholding an ecological community’s structure. The intertidal sea star, Pisaster ochraceus, of the northwestern United States is a keystone species (see the figure below). Studies have shown that when this organism is removed from communities, populations of their natural prey (mussels) increase, completely altering the species composition and reducing biodiversity. Another keystone species is the banded tetra, a fish in tropical streams, which supplies nearly all of the phosphorus, a necessary inorganic nutrient, to the rest of the community. If these fish were to become extinct, the community would be greatly affected. 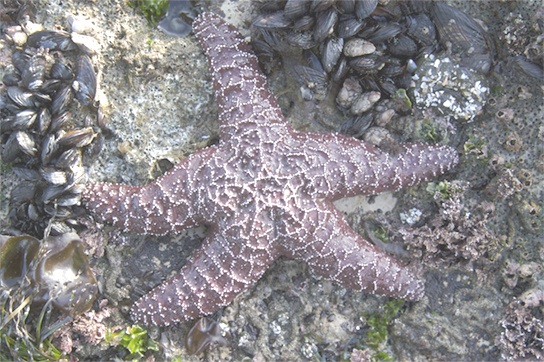 Invasive species are non-native organisms that, when introduced to an area out of their native range, threaten the ecosystem balance of that habitat. Many such species exist in the United States, as shown in the figure below. Whether enjoying a forest hike, taking a summer boat trip, or simply walking down an urban street, you have likely encountered an invasive species. 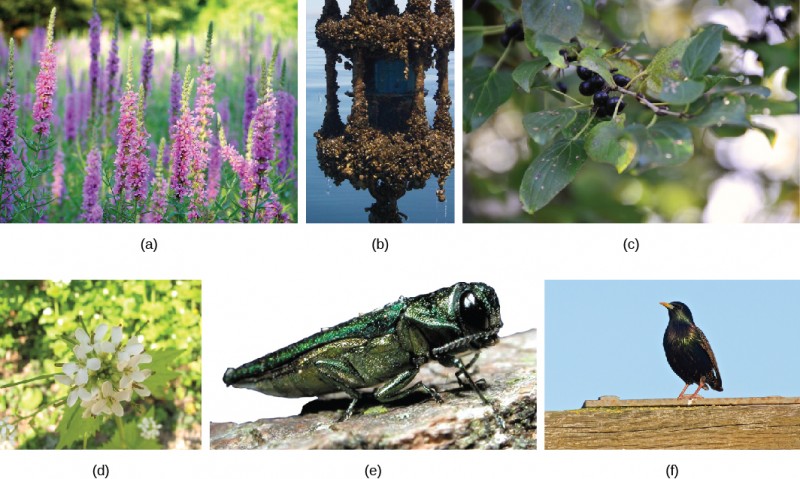 One of the many recent proliferations of an invasive species concerns the growth of Asian carp populations. Asian carp were introduced to the United States in the 1970s by fisheries and sewage treatment facilities that used the fish’s excellent filter feeding capabilities to clean their ponds of excess plankton. Some of the fish escaped, however, and by the 1980s they had colonized many waterways of the Mississippi River basin, including the Illinois and Missouri Rivers.

Voracious eaters and rapid reproducers, Asian carp may outcompete native species for food, potentially leading to their extinction. For example, black carp are voracious eaters of native mussels and snails, limiting this food source for native fish species. Silver carp eat plankton that native mussels and snails feed on, reducing this food source by a different alteration of the food web. In some areas of the Mississippi River, Asian carp species have become the most predominant, effectively outcompeting native fishes for habitat. In some parts of the Illinois River, Asian carp constitute 95 percent of the community’s biomass. Although edible, the fish is bony and not a desired food in the United States. Moreover, their presence threatens the native fish and fisheries of the Great Lakes, which are important to local economies and recreational anglers. Asian carp have even injured humans. The fish, frightened by the sound of approaching motorboats, thrust themselves into the air, often landing in the boat or directly hitting the boaters.

The Great Lakes and their prized salmon and lake trout fisheries are also being threatened by these invasive fish. Asian carp have already colonized rivers and canals that lead into Lake Michigan. One infested waterway of particular importance is the Chicago Sanitary and Ship Channel, the major supply waterway linking the Great Lakes to the Mississippi River. To prevent the Asian carp from leaving the canal, a series of electric barriers have been successfully used to discourage their migration; however, the threat is significant enough that several states and Canada have sued to have the Chicago channel permanently cut off from Lake Michigan. Local and national politicians have weighed in on how to solve the problem, but no one knows whether the Asian carp will ultimately be considered a nuisance, like other invasive species such as the water hyacinth and zebra mussel, or whether it will be the destroyer of the largest freshwater fishery of the world.

The issues associated with Asian carp show how population and community ecology, fisheries management, and politics intersect on issues of vital importance to the human food supply and economy. Socio-political issues like this make extensive use of the sciences of population ecology (the study of members of a particular species occupying a particular area known as a habitat) and community ecology (the study of the interaction of all species within a habitat).