As with angiosperms, the lifecycle of a gymnosperm is also characterized by alternation of generations. In conifers such as pines, the green leafy part of the plant is the sporophyte, and the cones contain the male and female gametophytes (see the figure below). The female cones are larger than the male cones and are positioned towards the top of the tree; the small, male cones are located in the lower region of the tree. Because the pollen is shed and blown by the wind, this arrangement makes it difficult for a gymnosperm to self-pollinate. 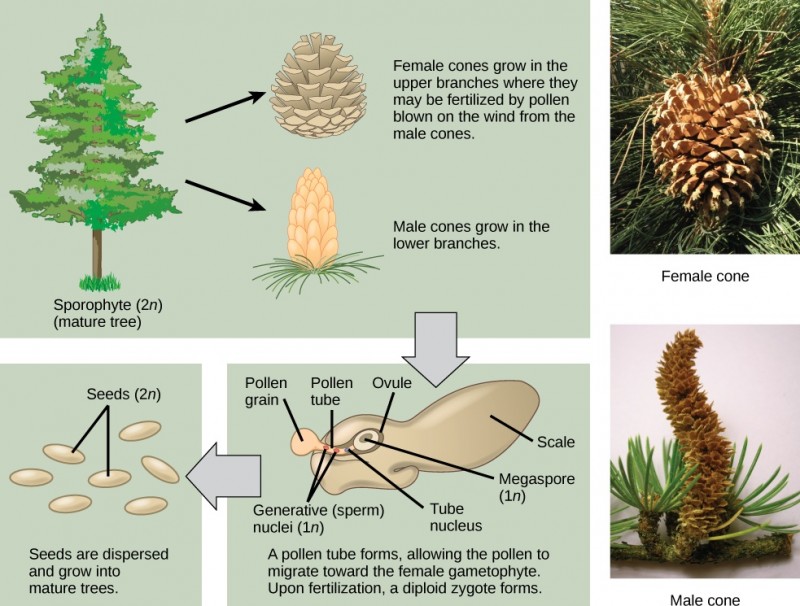 Watch this video to see a cedar releasing its pollen in the wind.

The female cone also has a central axis on which bracts known as megasporophylls (see the figure below) are present. In the female cone, megaspore mother cells are present in the megasporangium. The megaspore mother cell divides by meiosis to produce four haploid megaspores. One of the megaspores divides to form the multicellular female gametophyte, while the others divide to form the rest of the structure. The female gametophyte is contained within a structure called the archegonium. 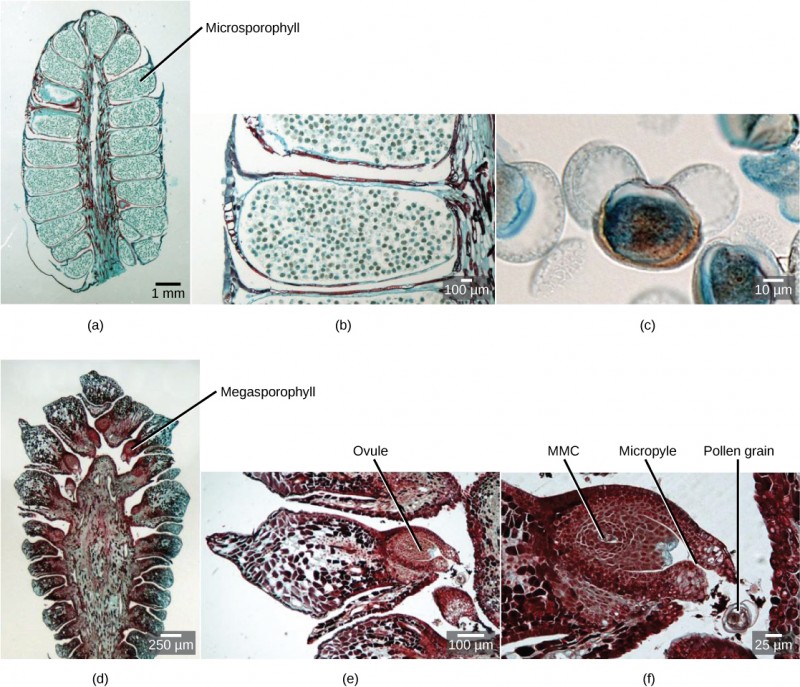 These series of micrographs shows male and female gymnosperm gametophytes. (a) This male cone, shown in cross section, has approximately 20 microsporophylls, each of which produces hundreds of male gametophytes (pollen grains). (b) Pollen grains are visible in this single microsporophyll. (c) This micrograph shows an individual pollen grain. (d) This cross section of a female cone shows portions of about 15 megasporophylls. (e) The ovule can be seen in this single megasporophyll. (f) Within this single ovule are the megaspore mother cell (MMC), micropyle, and a pollen grain. (credit: modification of work by Robert R. Wise; scale-bar data from Matt Russell)

After fertilization of the egg, the diploid zygote is formed, which divides by mitosis to form the embryo. The scales of the cones are closed during development of the seed. The seed is covered by a seed coat, which is derived from the female sporophyte. Seed development takes another one to two years. Once the seed is ready to be dispersed, the bracts of the female cones open to allow the dispersal of seed; no fruit formation takes place because gymnosperm seeds have no covering.