The lifecycle of angiosperms follows the alternation of generations explained previously. The haploid gametophyte alternates with the diploid sporophyte during the sexual reproduction process of angiosperms. Flowers contain the plant’s reproductive structures.

A typical flower has four main parts—or whorls—known as the calyx, corolla, androecium, and gynoecium (see the figure below). The outermost whorl of the flower has green, leafy structures known as sepals. The sepals, collectively called the calyx, help to protect the unopened bud. The second whorl is comprised of petals—usually, brightly colored—collectively called the corolla. The number of sepals and petals varies depending on whether the plant is a monocot or dicot.

In monocots, petals usually number three or multiples of three; in dicots, the number of petals is four or five, or multiples of four and five. Together, the calyx and corolla are known as the perianth. The third whorl contains the male reproductive structures and is known as the androecium. The androecium has stamens with anthers that contain the microsporangia. The innermost group of structures in the flower is the gynoecium, or the female reproductive component(s). The carpel is the individual unit of the gynoecium and has a stigma, style, and ovary. A flower may have one or multiple carpels. 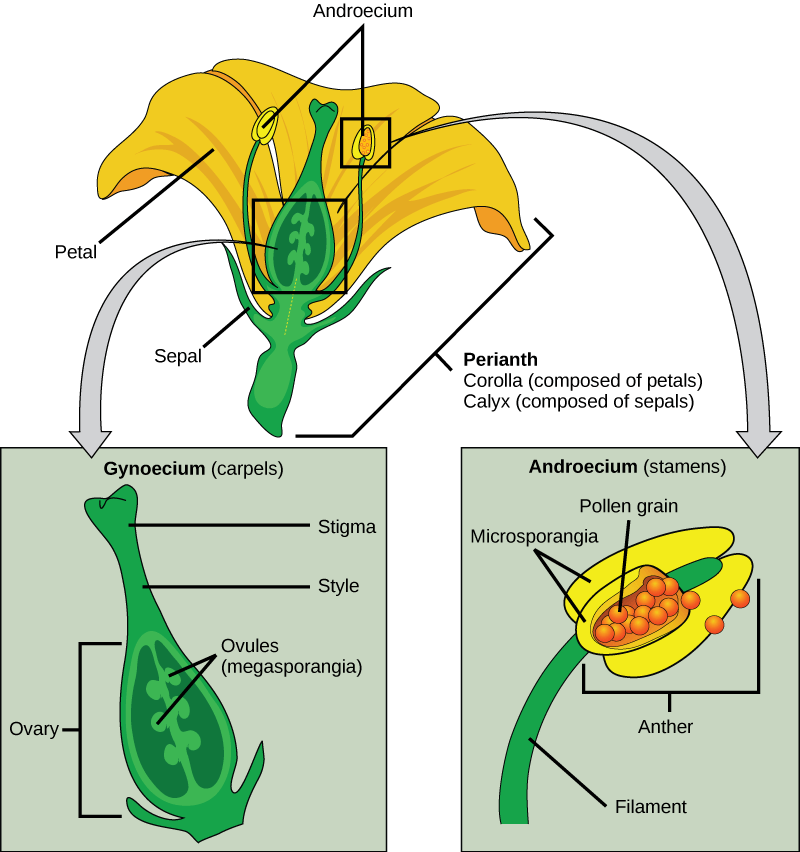 If all four whorls (the calyx, corolla, androecium, and gynoecium) are present, the flower is described as complete. If any of the four parts is missing, the flower is known as incomplete. Flowers that contain both an androecium and a gynoecium are called perfect, androgynous or hermaphrodites. There are two types of incomplete flowers: staminate flowers contain only an androecium, and carpellate flowers have only a gynoecium (see the figure below). 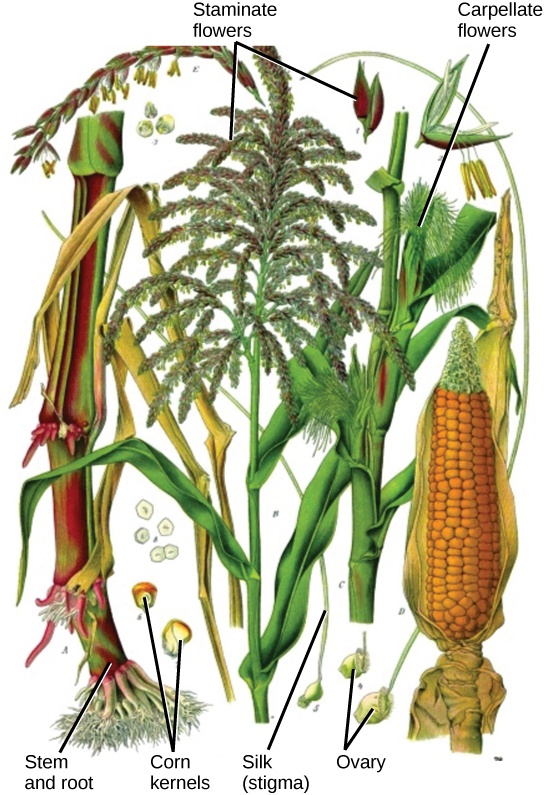 The corn plant has both staminate (male) and carpellate (female) flowers. Staminate flowers, which are clustered in the tassel at the tip of the stem, produce pollen grains. Carpellate flower are clustered in the immature ears. Each strand of silk is a stigma. The corn kernels are seeds that develop on the ear after fertilization. Also shown is the lower stem and root.

If both male and female flowers are borne on the same plant, the species is called monoecious (meaning “one home”): examples are corn and pea. Species with male and female flowers borne on separate plants are termed dioecious, or “two homes,” examples of which are C. papaya and Cannabis. The ovary, which may contain one or multiple ovules, may be placed above other flower parts, which is referred to as superior; or, it may be placed below the other flower parts, referred to as inferior (see the figure below). 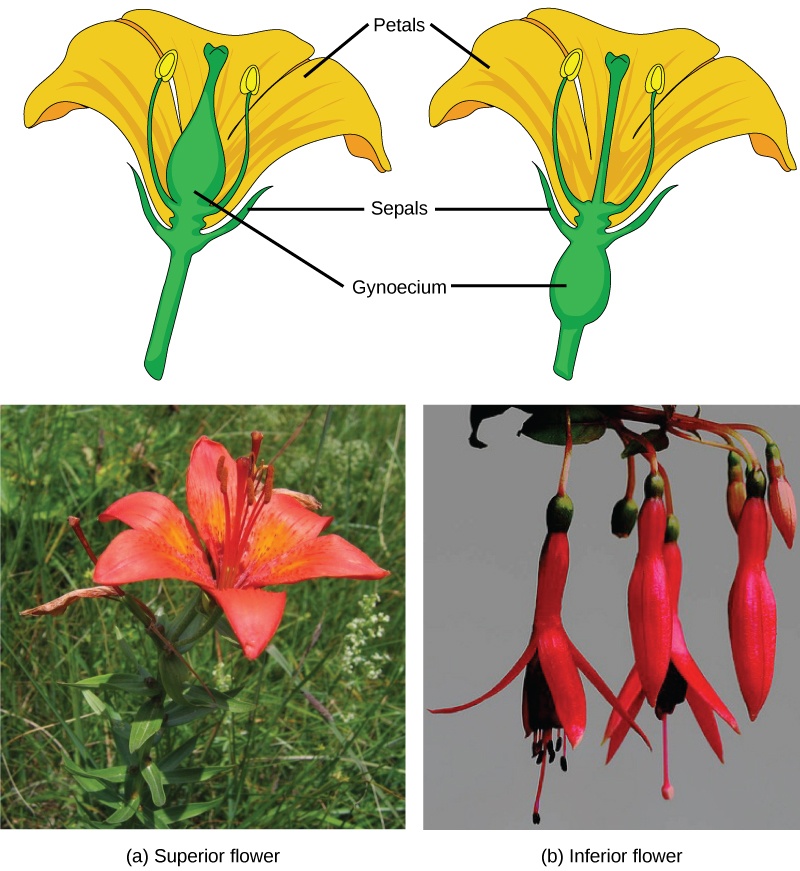 The (a) lily is a superior flower, which has the ovary above the other flower parts. (b) Fuchsia is an inferior flower, which has the ovary beneath other flower parts. (credit a photo: modification of work by Benjamin Zwittnig; credit b photo: modification of work by “Koshy Koshy”/Flickr)

The male gametophyte develops and reaches maturity in an immature anther. In a plant’s male reproductive organs, development of pollen takes place in a structure known as the microsporangium (see the figure below). The microsporangia, which are usually bi-lobed, are pollen sacs in which the microspores develop into pollen grains. These are found in the anther, which is at the end of the stamen—the long filament that supports the anther. 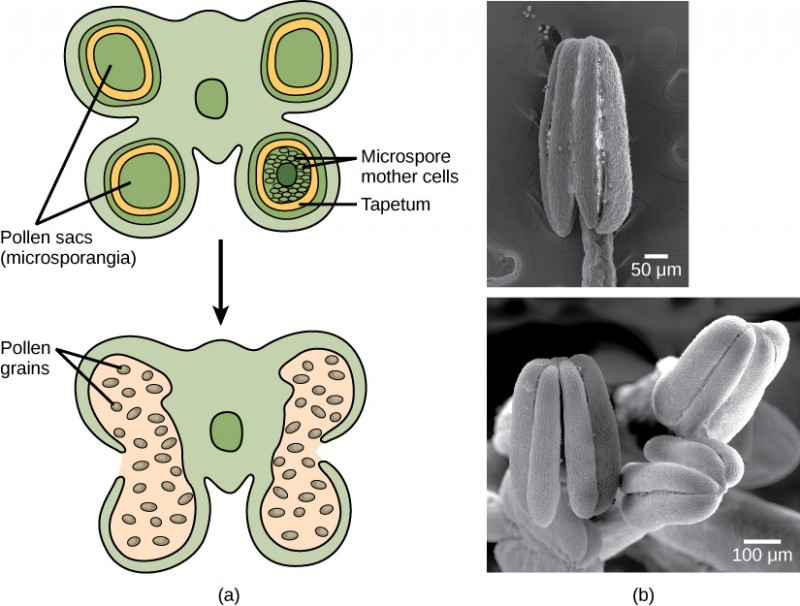 Shown is (a) a cross section of an anther at two developmental stages. The immature anther (top) contains four microsporangia, or pollen sacs. Each microsporangium contains hundreds of microspore mother cells that will each give rise to four pollen grains. The tapetum supports the development and maturation of the pollen grains. Upon maturation of the pollen (bottom), the pollen sac walls split open and the pollen grains (male gametophytes) are released. (b) In these scanning electron micrographs, pollen sacs are ready to burst, releasing their grains. (credit b: modification of work by Robert R. Wise; scale-bar data from Matt Russell) 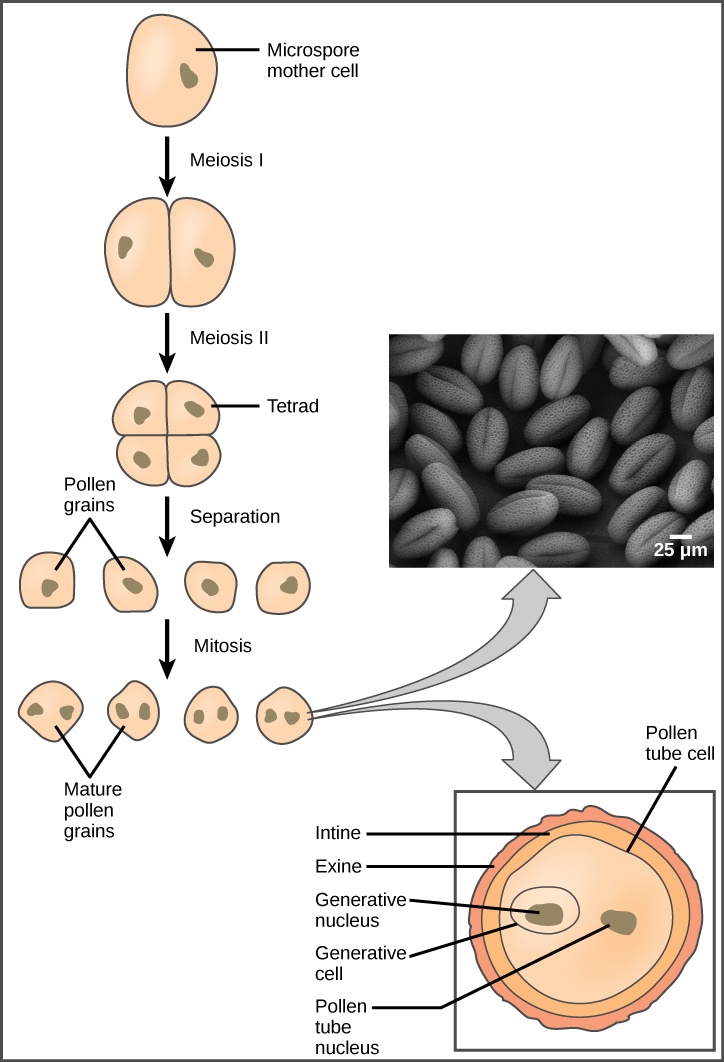 Pollen develops from the microspore mother cells. The mature pollen grain is composed of two cells: the pollen tube cell and the generative cell, which is inside the tube cell. The pollen grain has two coverings: an inner layer (intine) and an outer layer (exine). The inset scanning electron micrograph shows Arabidopsis lyrata pollen grains. (credit “pollen micrograph”: modification of work by Robert R. Wise; scale-bar data from Matt Russell)

Each pollen grain has two coverings: the exine (thicker, outer layer) and the intine (see the figure above). The exine contains sporopollenin, a complex waterproofing substance supplied by the tapetal cells. Sporopollenin allows the pollen to survive under unfavorable conditions and to be carried by wind, water, or biological agents without undergoing damage.

While the details may vary between species, the overall development of the female gametophyte has two distinct phases. First, in the process of megasporogenesis, a single cell in the diploid megasporangium—an area of tissue in the ovules—undergoes meiosis to produce four megaspores, only one of which survives. During the second phase, megagametogenesis, the surviving haploid megaspore undergoes mitosis to produce an eight-nucleate, seven-cell female gametophyte, also known as the megagametophyte or embryo sac. Two of the nuclei—the polar nuclei—move to the equator and fuse, forming a single, diploid central cell.

This central cell later fuses with a sperm to form the triploid endosperm. Three nuclei position themselves on the end of the embryo sac opposite the micropyle and develop into the antipodal cells, which later degenerate. The nucleus closest to the micropyle becomes the female gamete, or egg cell, and the two adjacent nuclei develop into synergid cells (see the figure below). The synergids help guide the pollen tube for successful fertilization, after which they disintegrate. Once fertilization is complete, the resulting diploid zygote develops into the embryo, and the fertilized ovule forms the other tissues of the seed.

A double-layered integument protects the megasporangium and, later, the embryo sac. The integument will develop into the seed coat after fertilization and protect the entire seed. The ovule wall will become part of the fruit. The integuments, while protecting the megasporangium, do not enclose it completely, but leave an opening called the micropyle. The micropyle allows the pollen tube to enter the female gametophyte for fertilization. 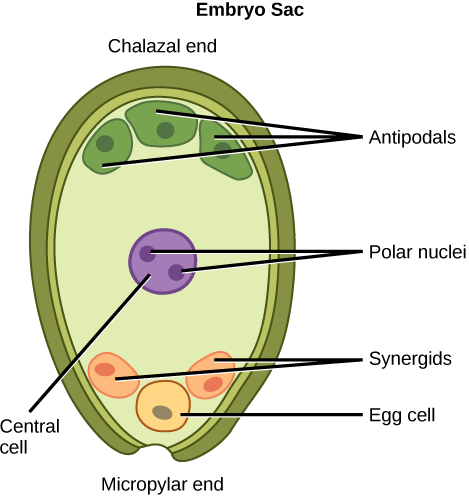 As shown in this diagram of the embryo sac in angiosperms, the ovule is covered by integuments and has an opening called a micropyle. Inside the embryo sac are three antipodal cells, two synergids, a central cell, and the egg cell.

An embryo sac is missing the synergids. What specific impact would you expect this to have on fertilization?

B: The pollen tube will form but will not be guided toward the egg.