Bees are perhaps the most important pollinator of many garden plants and most commercial fruit trees (see the figure below). The most common species of bees are bumblebees and honeybees. Since bees cannot see the color red, bee-pollinated flowers usually have shades of blue, yellow, or other colors. Bees collect energy-rich pollen or nectar for their survival and energy needs. They visit flowers that are open during the day, are brightly colored, have a strong aroma or scent, and have a tubular shape, typically with the presence of a nectar guide.

A nectar guide includes regions on the flower petals that are visible only to bees, and not to humans; it helps to guide bees to the center of the flower, thus making the pollination process more efficient. The pollen sticks to the bees’ fuzzy hair, and when the bee visits another flower, some of the pollen is transferred to the second flower. Recently, there have been many reports about the declining population of honeybees. Many flowers will remain unpollinated and not bear seed if honeybees disappear. The impact on commercial fruit growers could be devastating. 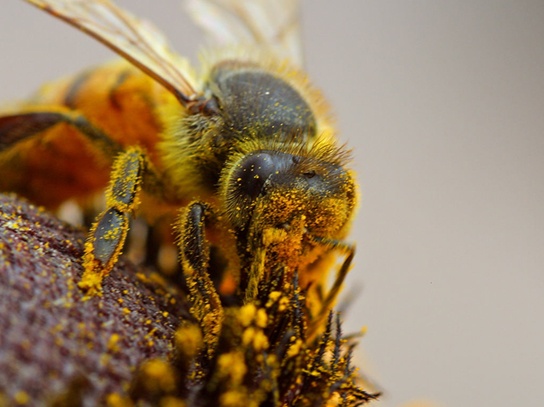 Insects, such as bees, are important agents of pollination. (credit: modification of work by Jon Sullivan)

Many flies are attracted to flowers that have a decaying smell or an odor of rotting flesh. These flowers, which produce nectar, usually have dull colors, such as brown or purple. They are found on the corpse flower or voodoo lily (Amorphophallus), dragon arum (Dracunculus), and carrion flower (Stapleia, Rafflesia). The nectar provides energy, whereas the pollen provides protein. Wasps are also important insect pollinators, and pollinate many species of figs.

Butterflies, such as the monarch, pollinate many garden flowers and wildflowers, which usually occur in clusters. These flowers are brightly colored, have a strong fragrance, are open during the day, and have nectar guides to make access to nectar easier. The pollen is picked up and carried on the butterfly’s limbs. Moths, on the other hand, pollinate flowers during the late afternoon and night. The flowers pollinated by moths are pale or white and are flat, enabling the moths to land.

One well-studied example of a moth-pollinated plant is the yucca plant, which is pollinated by the yucca moth. The shape of the flower and moth have adapted in such a way as to allow successful pollination. The moth deposits pollen on the sticky stigma for fertilization to occur later. The female moth also deposits eggs into the ovary. As the eggs develop into larvae, they obtain food from the flower and developing seeds. Thus, both the insect and flower benefit from each other in this symbiotic relationship. The corn earworm moth and Gaura plant have a similar relationship (see the figure below). 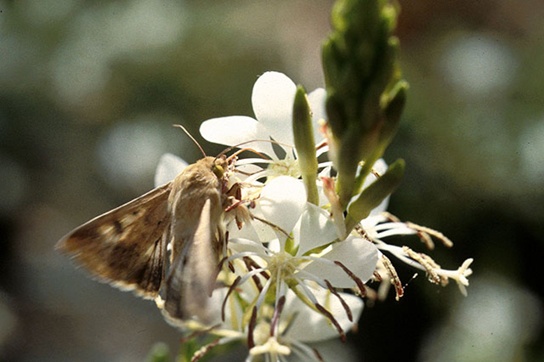