Pollination by Birds and Bats

In the tropics and deserts, bats are often the pollinators of nocturnal flowers such as agave, guava, and morning glory. The flowers are usually large and white or pale-colored; thus, they can be distinguished from the dark surroundings at night. The flowers have a strong, fruity, or musky fragrance and produce large amounts of nectar. They are naturally large and wide-mouthed to accommodate the head of the bat. As the bats seek the nectar, their faces and heads become covered with pollen, which is then transferred to the next flower.

Many species of small birds, such as the hummingbird (see the figure below) and sun birds, are pollinators for plants such as orchids and other wildflowers. Flowers visited by birds are usually sturdy and are oriented in such a way as to allow the birds to stay near the flower without getting their wings entangled in the nearby flowers. The flower typically has a curved, tubular shape, which allows access for the bird’s beak. Brightly colored, odorless flowers that are open during the day are pollinated by birds. As a bird seeks energy-rich nectar, pollen is deposited on the bird’s head and neck and is then transferred to the next flower it visits. Botanists have been known to determine the range of extinct plants by collecting and identifying pollen from 200-year-old bird specimens from the same site. 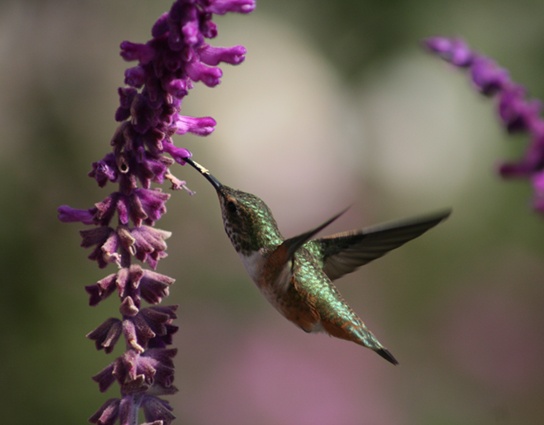 Hummingbirds have adaptations that allow them to reach the nectar of certain tubular flowers. (credit: Lori Branham)