The pollen tube is guided by the chemicals secreted by the synergids present in the embryo sac, and it enters the ovule sac through the micropyle. Of the two sperm cells, one sperm fertilizes the egg cell, forming a diploid zygote; the other sperm fuses with the two polar nuclei, forming a triploid cell that develops into the endosperm. Together, these two fertilization events in angiosperms are known as double fertilization (see the figure below). After fertilization is complete, no other sperm can enter. The fertilized ovule forms the seed, whereas the tissues of the ovary become the fruit, usually enveloping the seed. 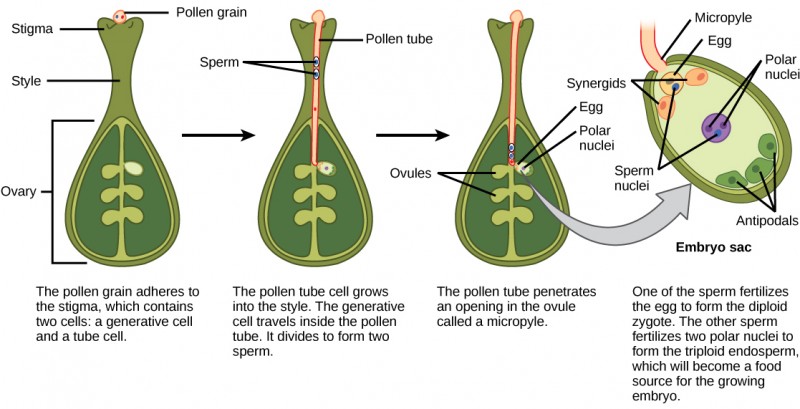 After fertilization, the zygote divides to form two cells: the upper cell, or terminal cell, and the lower, or basal, cell. The division of the basal cell gives rise to the suspensor, which eventually makes connection with the maternal tissue. The suspensor provides a route for nutrition to be transported from the mother plant to the growing embryo. The terminal cell also divides, giving rise to a globular-shaped proembryo (see figure (a) below). In dicots (eudicots), the developing embryo has a heart shape, due to the presence of the two rudimentary cotyledons (see figure (b) below).

In non-endospermic dicots, such as Capsella bursa, the endosperm develops initially, but is then digested, and the food reserves are moved into the two cotyledons. As the embryo and cotyledons enlarge, they run out of room inside the developing seed, and are forced to bend (see figure (c) below). Ultimately, the embryo and cotyledons fill the seed (see figure (d) below), and the seed is ready for dispersal. Embryonic development is suspended after some time, and growth is resumed only when the seed germinates. The developing seedling will rely on the food reserves stored in the cotyledons until the first set of leaves begin photosynthesis. 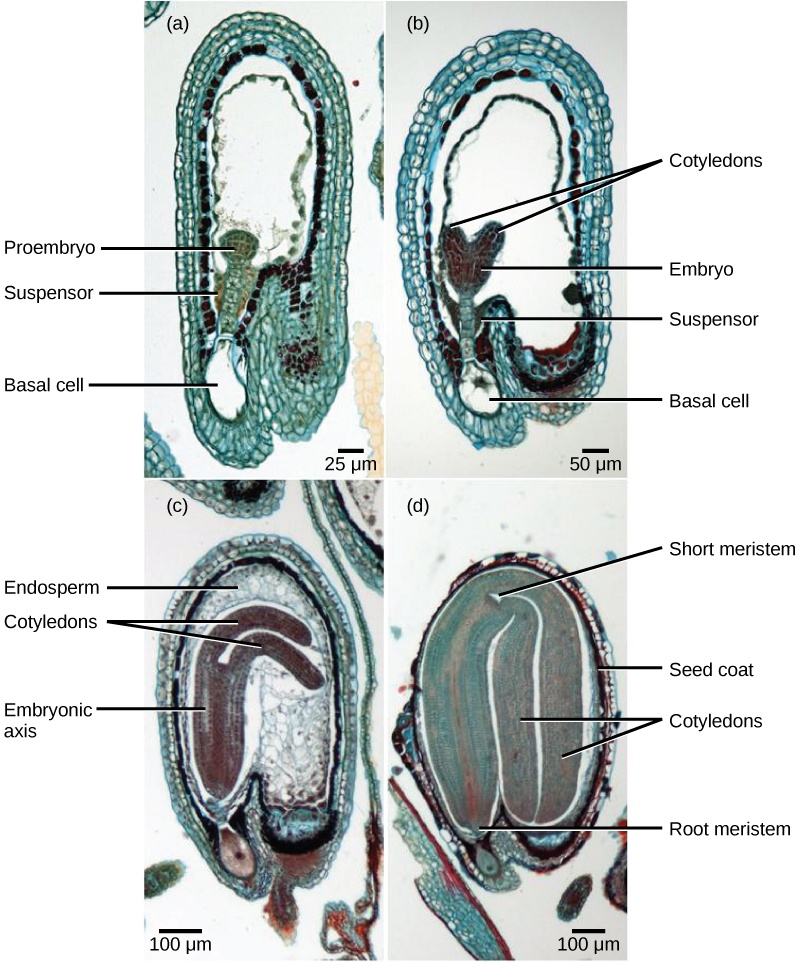 Shown are the stages of embryo development in the ovule of a shepherd’s purse (Capsella bursa). After fertilization, the zygote divides to form an upper terminal cell and a lower basal cell. (a) In the first stage of development, the terminal cell divides, forming a globular pro-embryo. The basal cell also divides, giving rise to the suspensor. (b) In the second stage, the developing embryo has a heart shape due to the presence of cotyledons. (c) In the third stage, the growing embryo runs out of room and starts to bend. (d) Eventually, it completely fills the seed. (credit: modification of work by Robert R. Wise; scale-bar data from Matt Russell)

Development of the Seed

The mature ovule develops into the seed. A typical seed contains a seed coat, cotyledons, endosperm, and a single embryo (see the figure below).

The structures of dicot and monocot seeds are shown. Dicots (left) have two cotyledons. Monocots, such as corn (right), have one cotyledon, called the scutellum; it channels nutrition to the growing embryo. Both monocot and dicot embryos have a plumule that forms the leaves, a hypocotyl that forms the stem, and a radicle that forms the root. The embryonic axis comprises everything between the plumule and the radicle, not including the cotyledon(s).

What is of the following statements is true?

It provides nutrition for the embryo.

The storage of food reserves in angiosperm seeds differs between monocots and dicots. In monocots, such as corn and wheat, the single cotyledon is called a scutellum; the scutellum is connected directly to the embryo via vascular tissue (xylem and phloem). Food reserves are stored in the large endosperm. Upon germination, enzymes are secreted by the aleurone, a single layer of cells just inside the seed coat that surrounds the endosperm and embryo. The enzymes degrade the stored carbohydrates, proteins and lipids, the products of which are absorbed by the scutellum and transported via a vasculature strand to the developing embryo. Therefore, the scutellum can be seen to be an absorptive organ, not a storage organ.

Upon germination in dicot seeds, the epicotyl is shaped like a hook with the plumule pointing downwards. This shape is called the plumule hook, and it persists as long as germination proceeds in the dark. Therefore, as the epicotyl pushes through the tough and abrasive soil, the plumule is protected from damage. Upon exposure to light, the hypocotyl hook straightens out, the young foliage leaves face the sun and expand, and the epicotyl continues to elongate. During this time, the radicle is also growing and producing the primary root. As it grows downward to form the tap root, lateral roots branch off to all sides, producing the typical dicot tap root system.

In monocot seeds (see the figure below), the testa and tegmen of the seed coat are fused. As the seed germinates, the primary root emerges, protected by the root-tip covering: the coleorhiza. Next, the primary shoot emerges, protected by the coleoptile: the covering of the shoot tip. Upon exposure to light (i.e. when the plumule has exited the soil and the protective coleoptile is no longer needed), elongation of the coleoptile ceases and the leaves expand and unfold. At the other end of the embryonic axis, the primary root soon dies, while other, adventitious roots (roots that do not arise from the usual place – i.e. the root) emerge from the base of the stem. This gives the monocot a fibrous root system. 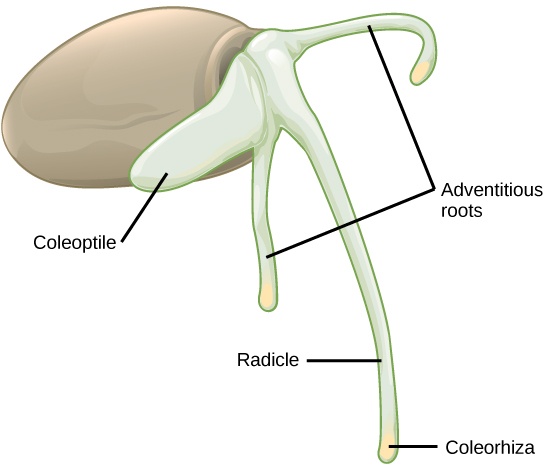 As this monocot grass seed germinates, the primary root, or radicle, emerges first, followed by the primary shoot, or coleoptile, and the adventitious roots.

Many mature seeds enter a period of inactivity, or extremely low metabolic activity: a process known as dormancy, which may last for months, years or even centuries. Dormancy helps keep seeds viable during unfavorable conditions. Upon a return to favorable conditions, seed germination takes place. Favorable conditions could be as diverse as moisture, light, cold, fire, or chemical treatments. After heavy rains, many new seedlings emerge. Forest fires also lead to the emergence of new seedlings.

Some seeds require vernalization (cold treatment) before they can germinate. This guarantees that seeds produced by plants in temperate climates will not germinate until the spring. Plants growing in hot climates may have seeds that need a heat treatment in order to germinate, to avoid germination in the hot, dry summers. In many seeds, the presence of a thick seed coat retards the ability to germinate. Scarification, which includes mechanical or chemical processes to soften the seed coat, is often employed before germination. Presoaking in hot water, or passing through an acid environment, such as an animal’s digestive tract, may also be employed.

Depending on seed size, the time taken for a seedling to emerge may vary. Species with large seeds have enough food reserves to germinate deep below ground, and still extend their epicotyl all the way to the soil surface. Seeds of small-seeded species usually require light as a germination cue. This ensures the seeds only germinate at or near the soil surface (where the light is greatest). If they were to germinate too far underneath the surface, the developing seedling would not have enough food reserves to reach the sunlight.