Development of Fruit and Fruit Types

Development of Fruit and Fruit Types

After fertilization, the ovary of the flower usually develops into the fruit. Fruits are usually associated with having a sweet taste; however, not all fruits are sweet. Botanically, the term “fruit” is used for a ripened ovary. In most cases, flowers in which fertilization has taken place will develop into fruits, and flowers in which fertilization has not taken place will not. Some fruits develop from the ovary and are known as true fruits, whereas others develop from other parts of the female gametophyte and are known as accessory fruits.

The fruit encloses the seeds and the developing embryo, thereby providing it with protection. Fruits are of many types, depending on their origin and texture. The sweet tissue of the blackberry, the red flesh of the tomato, the shell of the peanut, and the hull of corn (the tough, thin part that gets stuck in your teeth when you eat popcorn) are all fruits. As the fruit matures, the seeds also mature.

Fruits may be classified as simple, aggregate, multiple, or accessory, depending on their origin (see the figure below). If the fruit develops from a single carpel or fused carpels of a single ovary, it is known as a simple fruit, as seen in nuts and beans. An aggregate fruit is one that develops from more than one carpel, but all are in the same flower: the mature carpels fuse together to form the entire fruit, as seen in the raspberry. Multiple fruit develops from an inflorescence or a cluster of flowers. An example is the pineapple, where the flowers fuse together to form the fruit. Accessory fruits (sometimes called false fruits) are not derived from the ovary, but from another part of the flower, such as the receptacle (strawberry) or the hypanthium (apples and pears). 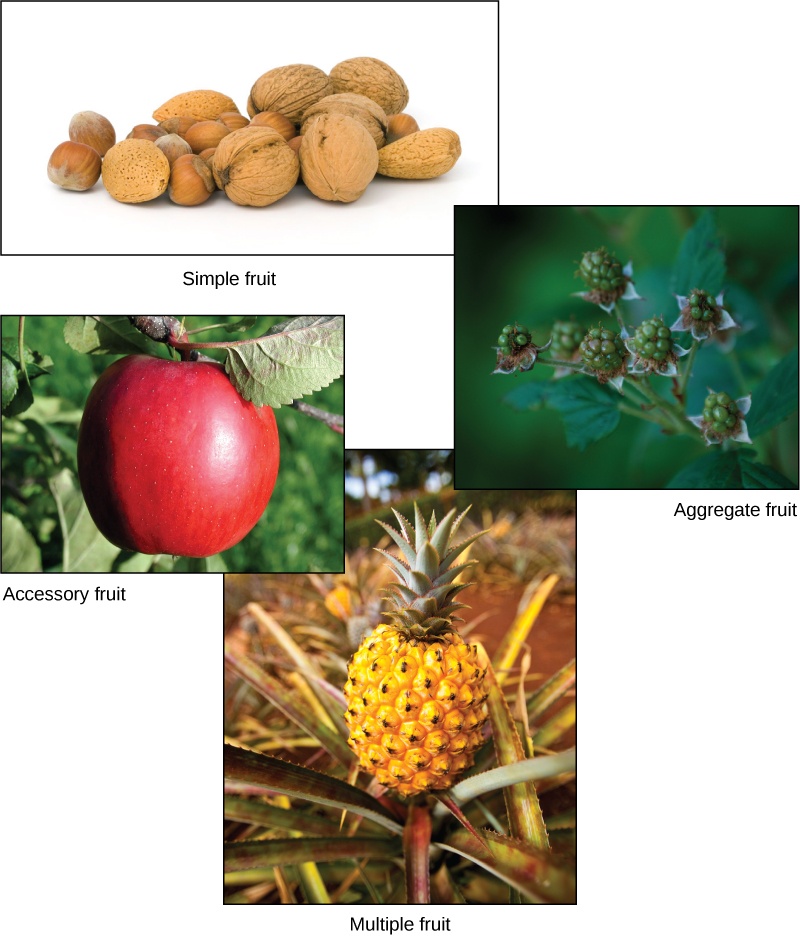 Fruits generally have three parts: the exocarp (the outermost skin or covering), the mesocarp (middle part of the fruit), and the endocarp (the inner part of the fruit). Together, all three are known as the pericarp. The mesocarp is usually the fleshy, edible part of the fruit; however, in some fruits, such as the almond, the endocarp is the edible part. In many fruits, two or all three of the layers are fused, and are indistinguishable at maturity. Fruits can be dry or fleshy. Furthermore, fruits can be divided into dehiscent or indehiscent types. Dehiscent fruits, such as peas, readily release their seeds, while indehiscent fruits, like peaches, rely on decay to release their seeds.