The stem and other plant organs arise from the ground tissue, and are primarily made up of simple tissues formed from three types of cells: parenchyma, collenchyma, and sclerenchyma cells. 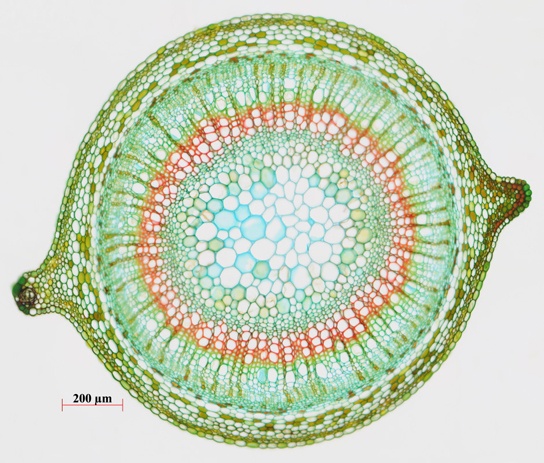 The stem of common St John’s Wort (Hypericum perforatum) is shown in cross section in this light micrograph. The central pith (greenish-blue, in the center) and peripheral cortex (narrow zone 3–5 cells thick just inside the epidermis) are composed of parenchyma cells. Vascular tissue composed of xylem (red) and phloem tissue (green, between the xylem and cortex) surrounds the pith. (credit: Rolf-Dieter Mueller)

Collenchyma cells are elongated cells with unevenly thickened walls (see the figure below). They provide structural support, mainly to the stem and leaves. These cells are alive at maturity and are usually found below the epidermis. The “strings” of a celery stalk are an example of collenchyma cells. 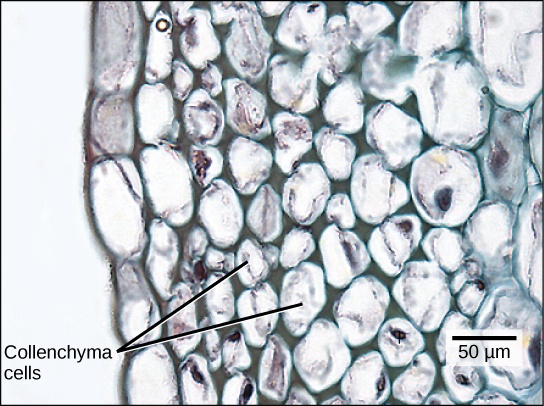 Collenchyma cell walls are uneven in thickness, as seen in this light micrograph. They provide support to plant structures. (credit: modification of work by Carl Szczerski; scale-bar data from Matt Russell)

Sclerenchyma cells also provide support to the plant, but unlike collenchyma cells, many of them are dead at maturity. There are two types of sclerenchyma cells: fibers and sclereids. Both types have secondary cell walls that are thickened with deposits of lignin, an organic compound that is a key component of wood. Fibers are long, slender cells; sclereids are smaller-sized. Sclereids give pears their gritty texture. Humans use sclerenchyma fibers to make linen and rope (see the figure below). 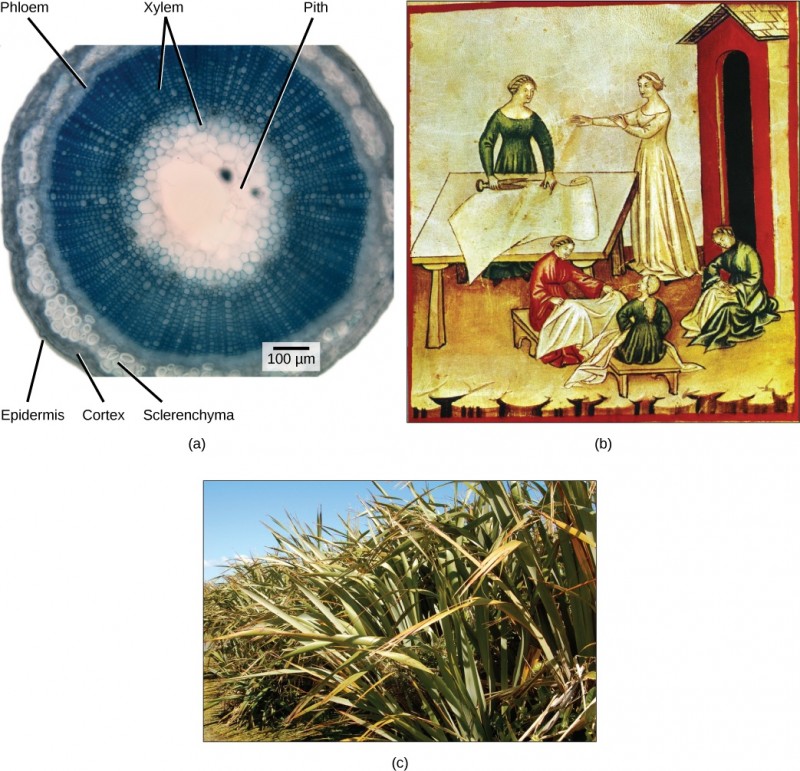 The central pith and outer cortex of the (a) flax stem are made up of parenchyma cells. Inside the cortex is a layer of sclerenchyma cells, which make up the fibers in flax rope and clothing. Humans have grown and harvested flax for thousands of years. In (b) this drawing, fourteenth-century women prepare linen. The (c) flax plant is grown and harvested for its fibers, which are used to weave linen, and for its seeds, which are the source of linseed oil. (credit a: modification of work by Emmanuel Boutet based on original work by Ryan R. MacKenzie; credit c: modification of work by Brian Dearth; scale-bar data from Matt Russell)

Which layers of the stem are made of parenchyma cells?

A and B. The cortex, pith, and epidermis are made of parenchyma cells.

Like the rest of the plant, the stem has three tissue systems: dermal, vascular, and ground tissue. Each is distinguished by characteristic cell types that perform specific tasks necessary for the plant’s growth and survival.

The dermal tissue of the stem consists primarily of epidermis, a single layer of cells covering and protecting the underlying tissue. Woody plants have a tough, waterproof outer layer of cork cells commonly known as bark, which further protects the plant from damage. Epidermal cells are the most numerous and least differentiated of the cells in the epidermis. The epidermis of a leaf also contains openings known as stomata, through which the exchange of gases takes place (see the figure below). Two cells, known as guard cells, surround each leaf stoma, controlling its opening and closing and thus regulating the uptake of carbon dioxide and the release of oxygen and water vapor. Trichomes are hair-like structures on the epidermal surface. They help to reduce transpiration (the loss of water by aboveground plant parts), increase solar reflectance, and store compounds that defend the leaves against predation by herbivores. 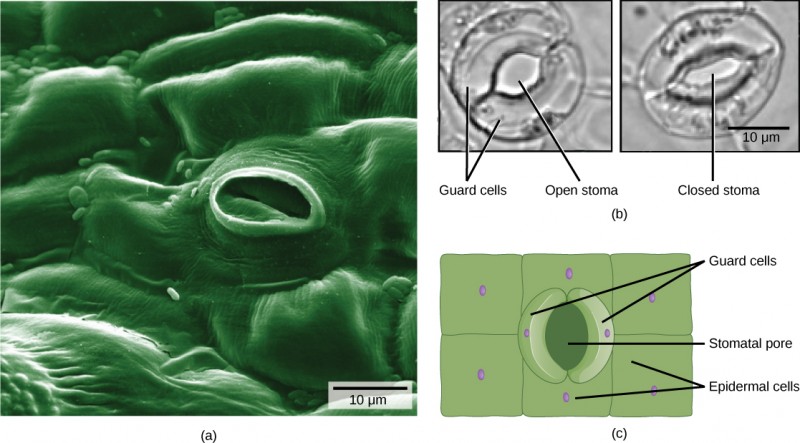 Openings called stomata (singular: stoma) allow a plant to take up carbon dioxide and release oxygen and water vapor. The (a) colorized scanning-electron micrograph shows a closed stoma of a dicot. Each stoma is flanked by two guard cells that regulate its (b) opening and closing. The (c) guard cells sit within the layer of epidermal cells (credit a: modification of work by Louisa Howard, Rippel Electron Microscope Facility, Dartmouth University; credit b: modification of work by June Kwak, University of Maryland; scale-bar data from Matt Russell)

Xylem tissue has three types of cells: xylem parenchyma, tracheids, and vessel elements. The latter two types conduct water and are dead at maturity. Tracheids are xylem cells with thick secondary cell walls that are lignified. Water moves from one tracheid to another through regions on the side walls known as pits, where secondary walls are absent. Vessel elements are xylem cells with thinner walls; they are shorter than tracheids. Each vessel element is connected to the next by means of a perforation plate at the end walls of the element. Water moves through the perforation plates to travel up the plant.