Root growth begins with seed germination. When the plant embryo emerges from the seed, the radicle of the embryo forms the root system. The tip of the root is protected by the root cap, a structure exclusive to roots and unlike any other plant structure. The root cap is continuously replaced because it gets damaged easily as the root pushes through soil. The root tip can be divided into three zones: a zone of cell division, a zone of elongation, and a zone of maturation and differentiation (see the figure below). The zone of cell division is closest to the root tip; it is made up of the actively dividing cells of the root meristem. The zone of elongation is where the newly formed cells increase in length, thereby lengthening the root. Beginning at the first root hair is the zone of cell maturation where the root cells begin to differentiate into special cell types. All three zones are in the first centimeter or so of the root tip. 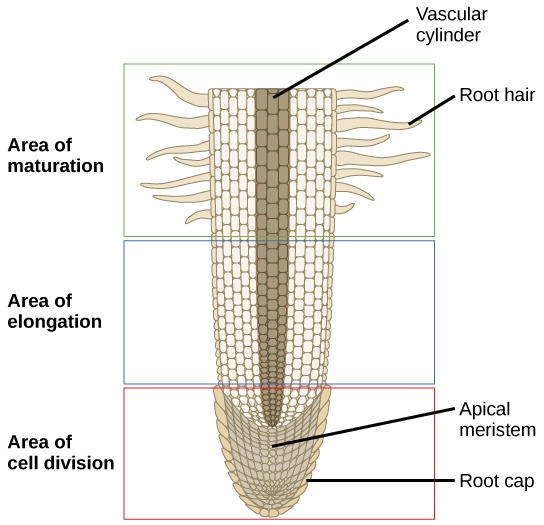 A longitudinal view of the root reveals the zones of cell division, elongation, and maturation. Cell division occurs in the apical meristem.

The root has an outer layer of cells called the epidermis, which surrounds areas of ground tissue and vascular tissue. The epidermis provides protection and helps in absorption. Root hairs, which are extensions of root epidermal cells, increase the surface area of the root, greatly contributing to the absorption of water and minerals. 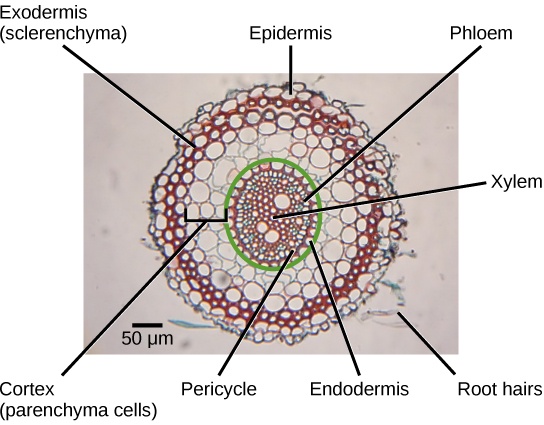 Staining reveals different cell types in this light micrograph of a wheat (Triticum) root cross section. Sclerenchyma cells of the exodermis and xylem cells stain red, and phloem cells stain blue. Other cell types stain black. The stele, or vascular tissue, is the area inside endodermis (indicated by a green ring). Root hairs are visible outside the epidermis. (credit: scale-bar data from Matt Russell)

The vascular tissue in the root is arranged in the inner portion of the root, which is called the stele (see the figure below). A layer of cells known as the endodermis separates the stele from the ground tissue in the outer portion of the root. The endodermis is exclusive to roots, and serves as a checkpoint for materials entering the root’s vascular system. A waxy substance called suberin is present on the walls of the endodermal cells.

This waxy region, known as the Casparian strip, forces water and solutes to cross the plasma membranes of endodermal cells instead of slipping between the cells. This ensures that only materials required by the root pass through the endodermis, while toxic substances and pathogens are generally excluded. The outermost cell layer of the root’s vascular tissue is the pericycle, an area that can give rise to lateral roots. In dicot roots, the xylem and phloem of the stele are arranged alternately in an X shape, whereas in monocot roots, the vascular tissue is arranged in a ring around the pith. 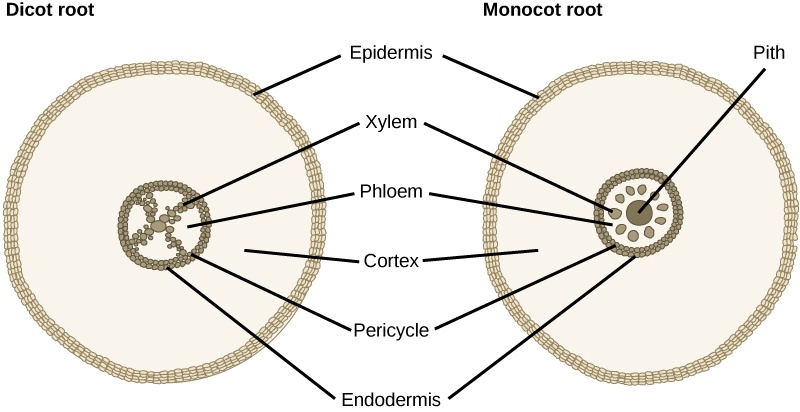 In (left) typical dicots, the vascular tissue forms an X shape in the center of the root. In (right) typical monocots, the phloem cells and the larger xylem cells form a characteristic ring around the central pith.