The recognition of the importance of HGT, especially in the evolution of prokaryotes, has caused some to propose abandoning the classic “tree of life” model. In 1999, W. Ford Doolittle proposed a phylogenetic model that resembles a web or a network more than a tree. The hypothesis is that eukaryotes evolved not from a single prokaryotic ancestor, but from a pool of many species that were sharing genes by HGT mechanisms.

As shown in figure (a) below, some individual prokaryotes were responsible for transferring the bacteria that caused mitochondrial development to the new eukaryotes, whereas other species transferred the bacteria that gave rise to chloroplasts. This model is often called the “web of life.” In an effort to save the tree analogy, some have proposed using the Ficus tree (see figure (b) below) with its multiple trunks as a phylogenetic to represent a diminished evolutionary role for HGT. 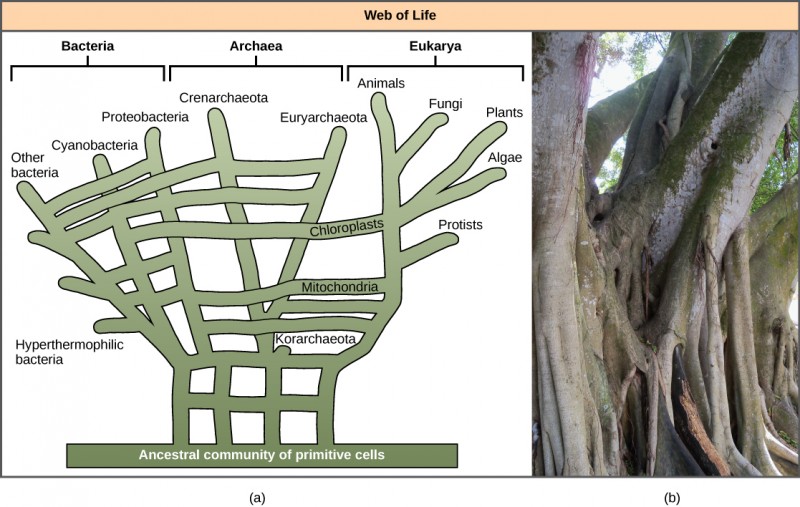 In the (a) phylogenetic model proposed by W. Ford Doolittle, the “tree of life” arose from a community of ancestral cells, has multiple trunks, and has connections between branches where horizontal gene transfer has occurred. Visually, this concept is better represented by (b) the multi-trunked Ficus than by the single trunk of the oak similar to the tree drawn by Darwin (see this figure from this lesson). (credit b: modification of work by “psyberartist”/Flickr)