The Levels of Classification

The Levels of Classification

Taxonomy (which literally means “arrangement law”) is the science of classifying organisms to construct internationally shared classification systems with each organism placed into more and more inclusive groupings. Think about how a grocery store is organized. One large space is divided into departments, such as produce, dairy, and meats. Then each department further divides into aisles, then each aisle into categories and brands, and then finally a single product. This organization from larger to smaller, more specific categories is called a hierarchical system.

The taxonomic classification system (also called the Linnaean system after its inventor, Carl Linnaeus, a Swedish botanist, zoologist, and physician) uses a hierarchical model. Moving from the point of origin, the groups become more specific, until one branch ends as a single species. For example, after the common beginning of all life, scientists divide organisms into three large categories called a domain: Bacteria, Archaea, and Eukarya. Within each domain is a second category called a kingdom. After kingdoms, the subsequent categories of increasing specificity are: phylum, class, order, family, genus, and species (see the figure below). 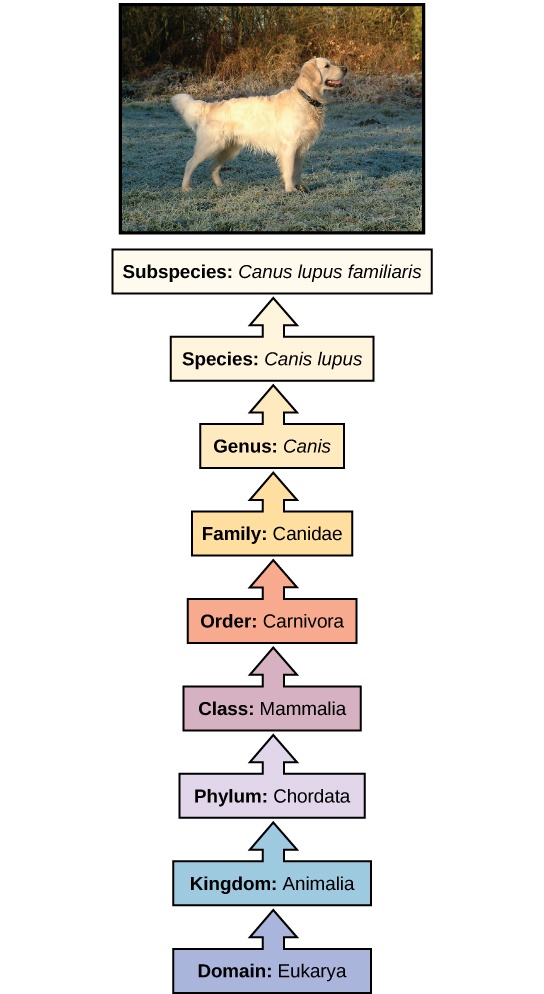 The taxonomic classification system uses a hierarchical model to organize living organisms into increasingly specific categories. The common dog, Canis lupus familiaris, is a subspecies of Canis lupus, which also includes the wolf and dingo. (credit “dog”: modification of work by Janneke Vreugdenhil)

The kingdom Animalia stems from the Eukarya domain. For the common dog, the classification levels would be as shown in the figure above. Therefore, the full name of an organism technically has eight terms. For the dog, it is: Eukarya, Animalia, Chordata, Mammalia, Carnivora, Canidae, Canis, and lupus. Notice that each name is capitalized except for species, and the genus and species names are italicized.

Scientists generally refer to an organism only by its genus and species, which is its two-word scientific name, in what is called binomial nomenclature. Therefore, the scientific name of the dog is Canis lupus. The name at each level is also called a taxon. In other words, dogs are in order Carnivora. Carnivora is the name of the taxon at the order level; Canidae is the taxon at the family level, and so forth.

Organisms also have a common name that people typically use, in this case, dog. Note that the dog is additionally a subspecies: the “familiaris” in Canis lupus familiaris. Subspecies are members of the same species that are capable of mating and reproducing viable offspring, but they are considered separate subspecies due to geographic or behavioral isolation or other factors.

The figure below shows how the levels move toward specificity with other organisms. Notice how the dog shares a domain with the widest diversity of organisms, including plants and butterflies. At each sublevel, the organisms become more similar because they are more closely related. Historically, scientists classified organisms using characteristics, but as DNA technology developed, more precise phylogenies have been determined. 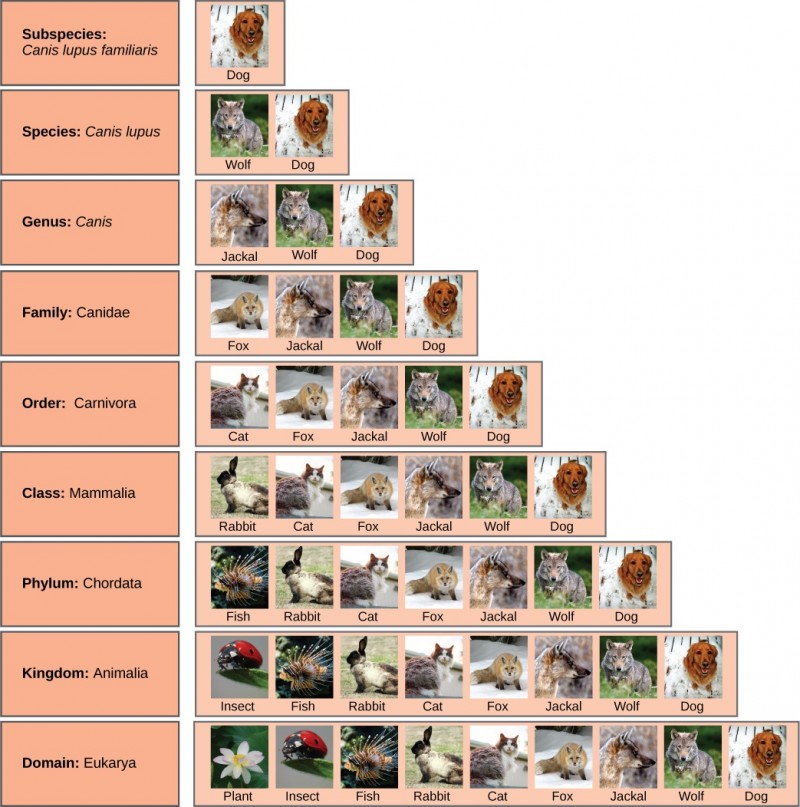 At what levels are cats and dogs considered to be part of the same group?

Cats and dogs are part of the same group at five levels: both are in the domain Eukarya, the kingdom Animalia, the phylum Chordata, the class Mammalia, and the order Carnivora.

Visit this website to classify three organisms—bear, orchid, and sea cucumber—from kingdom to species. To launch the game, under Classifying Life, click the picture of the bear or the Launch Interactive button.

Recent genetic analysis and other advancements have found that some earlier phylogenetic classifications do not align with the evolutionary past; therefore, changes and updates must be made as new discoveries occur. Recall that phylogenetic trees are hypotheses and are modified as data becomes available. In addition, classification historically has focused on grouping organisms mainly by shared characteristics and does not necessarily illustrate how the various groups relate to each other from an evolutionary perspective. For example, despite the fact that a hippopotamus resembles a pig more than a whale, the hippopotamus may be the closest living relative of the whale.