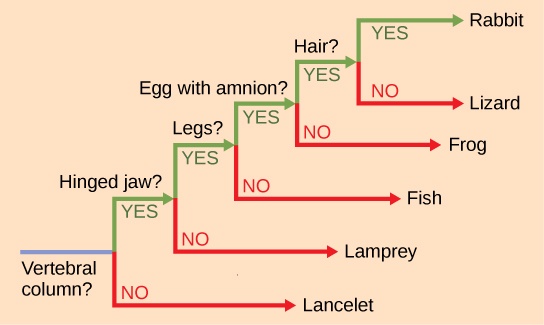 This ladder-like phylogenetic tree of vertebrates is rooted by an organism that lacked a vertebral column. At each branch point, organisms with different characters are placed in different groups based on the characteristics they share.

Another aspect of phylogenetic trees is that, unless otherwise indicated, the branches do not account for length of time, only the evolutionary order. In other words, the length of a branch does not typically mean more time passed, nor does a short branch mean less time passed— unless specified on the diagram. For example, in the figure above, the tree does not indicate how much time passed between the evolution of amniotic eggs and hair. What the tree does show is the order in which things took place. Again using the figure above, the tree shows that the oldest trait is the vertebral column, followed by hinged jaws, and so forth.

Remember that any phylogenetic tree is a part of the greater whole, and like a real tree, it does not grow in only one direction after a new branch develops. So, for the organisms in the figure above, just because a vertebral column evolved does not mean that invertebrate evolution ceased, it only means that a new branch formed. Also, groups that are not closely related, but evolve under similar conditions, may appear more phenotypically similar to each other than to a close relative.

Head to this website to see interactive exercises that allow you to explore the evolutionary relationships among species.