Genome Fusion and the Evolution of Eukaryotes

Genome Fusion and the Evolution of Eukaryotes

Scientists believe the ultimate in HGT occurs through genome fusion between different species of prokaryotes when two symbiotic organisms become endosymbiotic. This occurs when one species is taken inside the cytoplasm of another species, which ultimately results in a genome consisting of genes from both the endosymbiont and the host. This mechanism is an aspect of the Endosymbiont Theory, which is accepted by a majority of biologists as the mechanism whereby eukaryotic cells obtained their mitochondria and chloroplasts. However, the role of endosymbiosis in the development of the nucleus is more controversial.

Within the past decade, the process of genome fusion by endosymbiosis has been proposed by James Lake of the UCLA/NASA Astrobiology Institute to be responsible for the evolution of the first eukaryotic cells (see figure (a) below). Using DNA analysis and a new mathematical algorithm called conditioned reconstruction (CR), his laboratory proposed that eukaryotic cells developed from an endosymbiotic gene fusion between two species, one an Archaea and the other a Bacteria. As mentioned, some eukaryotic genes resemble those of Archaea, whereas others resemble those from Bacteria. An endosymbiotic fusion event, such as Lake has proposed, would clearly explain this observation. On the other hand, this work is new and the CR algorithm is relatively unsubstantiated, which causes many scientists to resist this hypothesis.

More recent work by Lake (see figure (b) below) proposes that gram-negative bacteria, which are unique within their domain in that they contain two lipid bilayer membranes, indeed resulted from an endosymbiotic fusion of archaeal and bacterial species. The double membrane would be a direct result of the endosymbiosis, with the endosymbiont picking up the second membrane from the host as it was internalized. This mechanism has also been used to explain the double membranes found in mitochondria and chloroplasts. Lake’s work is not without skepticism, and the ideas are still debated within the biological science community.

In addition to Lake’s hypothesis, there are several other competing theories as to the origin of eukaryotes. How did the eukaryotic nucleus evolve? One theory is that the prokaryotic cells produced an additional membrane that surrounded the bacterial chromosome. Some bacteria have the DNA enclosed by two membranes; however, there is no evidence of a nucleolus or nuclear pores. Other proteobacteria also have membrane-bound chromosomes. If the eukaryotic nucleus evolved this way, we would expect one of the two types of prokaryotes to be more closely related to eukaryotes. 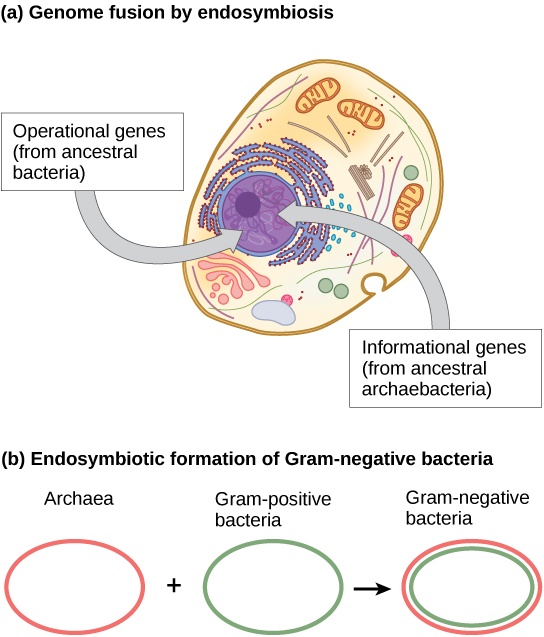 The theory that mitochondria and chloroplasts are endosymbiotic in origin is now widely accepted. More controversial is the proposal that (a) the eukaryotic nucleus resulted from the fusion of archaeal and bacterial genomes, and that (b) Gram-negative bacteria, which have two membranes, resulted from the fusion of Archaea and Gram-positive bacteria, each of which has a single membrane. 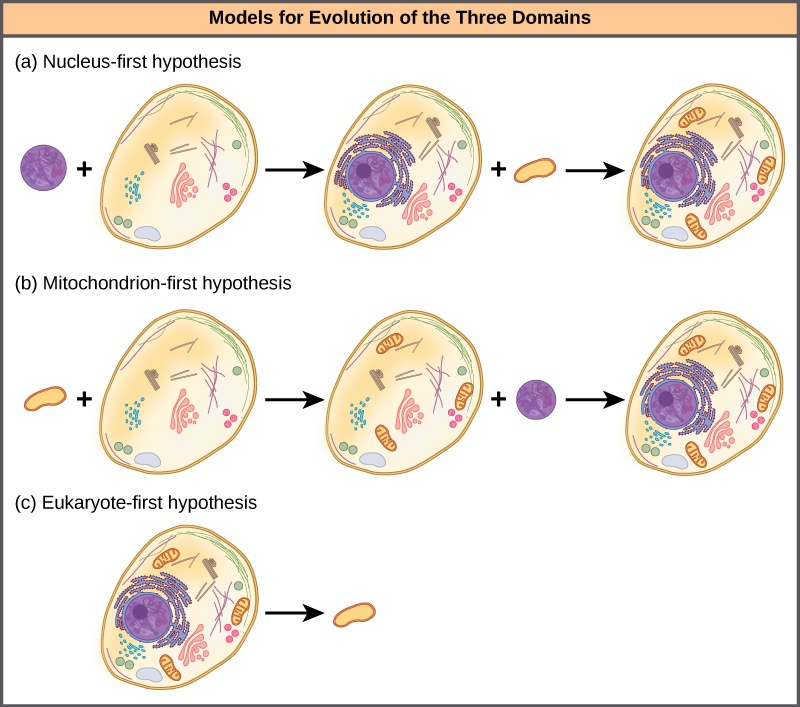