Biology » Phylogenies and the History of Life » Determining Evolutionary Relationships

How do scientists construct phylogenetic trees? After the homologous and analogous traits are sorted, scientists often organize the homologous traits using a system called cladistics. This system sorts organisms into clades: groups of organisms that descended from a single ancestor. For example, in the figure below, all of the organisms in the orange region evolved from a single ancestor that had amniotic eggs. Consequently, all of these organisms also have amniotic eggs and make a single clade, also called a monophyletic group. Clades must include all of the descendants from a branch point. 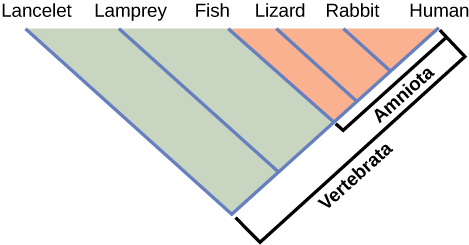 Which animals in this figure belong to a clade that includes animals with hair? Which evolved first, hair or the amniotic egg?

Clades can vary in size depending on which branch point is being referenced. The important factor is that all of the organisms in the clade or monophyletic group stem from a single point on the tree. This can be remembered because monophyletic breaks down into “mono,” meaning one, and “phyletic,” meaning evolutionary relationship. The figure below shows various examples of clades. Notice how each clade comes from a single point, whereas the non-clade groups show branches that do not share a single point. 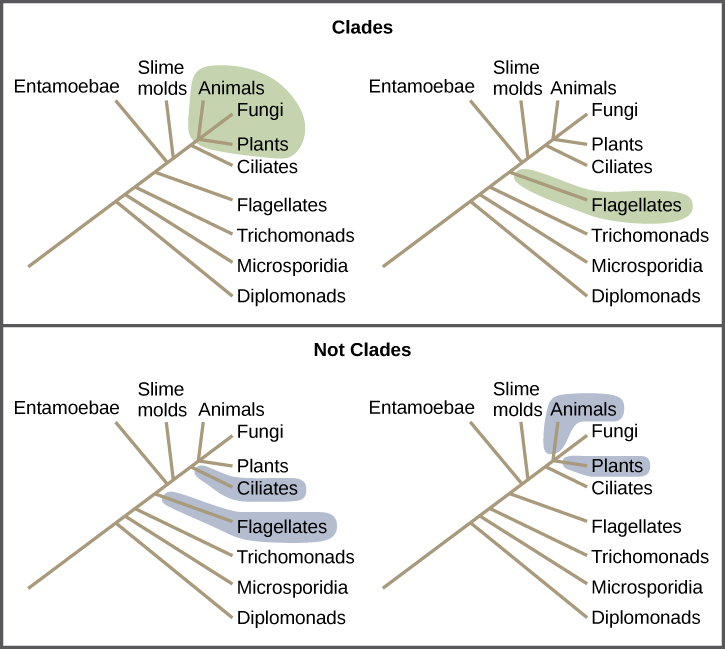 What is the largest clade in this diagram?

Organisms evolve from common ancestors and then diversify. Scientists use the phrase “descent with modification” because even though related organisms have many of the same characteristics and genetic codes, changes occur. This pattern repeats over and over as one goes through the phylogenetic tree of life:

If a characteristic is found in the ancestor of a group, it is considered a shared ancestral character because all of the organisms in the taxon or clade have that trait. The vertebrate in the figure above is a shared ancestral character. Now consider the amniotic egg characteristic in the same figure. Only some of the organisms in the figure above have this trait, and to those that do, it is called a shared derived character because this trait derived at some point but does not include all of the ancestors in the tree.

The tricky aspect to shared ancestral and shared derived characters is the fact that these terms are relative. The same trait can be considered one or the other depending on the particular diagram being used. Returning to the figure above, note that the amniotic egg is a shared ancestral character for the Amniota clade, while having hair is a shared derived character for some organisms in this group. These terms help scientists distinguish between clades in the building of phylogenetic trees.

Imagine being the person responsible for organizing all of the items in a department store properly—an overwhelming task. Organizing the evolutionary relationships of all life on Earth proves much more difficult: scientists must span enormous blocks of time and work with information from long-extinct organisms. Trying to decipher the proper connections, especially given the presence of homologies and analogies, makes the task of building an accurate tree of life extraordinarily difficult. Add to that the advancement of DNA technology, which now provides large quantities of genetic sequences to be used and analyzed. Taxonomy is a subjective discipline: many organisms have more than one connection to each other, so each taxonomist will decide the order of connections.

To aid in the tremendous task of describing phylogenies accurately, scientists often use a concept called maximum parsimony, which means that events occurred in the simplest, most obvious way. For example, if a group of people entered a forest preserve to go hiking, based on the principle of maximum parsimony, one could predict that most of the people would hike on established trails rather than forge new ones.

For scientists deciphering evolutionary pathways, the same idea is used: the pathway of evolution probably includes the fewest major events that coincide with the evidence at hand. Starting with all of the homologous traits in a group of organisms, scientists look for the most obvious and simple order of evolutionary events that led to the occurrence of those traits.

Head to this website to learn how maximum parsimony is used to create phylogenetic trees.

These tools and concepts are only a few of the strategies scientists use to tackle the task of revealing the evolutionary history of life on Earth. Recently, newer technologies have uncovered surprising discoveries with unexpected relationships, such as the fact that people seem to be more closely related to fungi than fungi are to plants. Sound unbelievable? As the information about DNA sequences grows, scientists will become closer to mapping the evolutionary history of all life on Earth.

This article has been modified from "Determining Evolutionary Relationships," by OpenStax, Biology, CC BY 4.0. Download the article for free at http://cnx.org/contents/185cbf87-c72e-48f5-b51e-f14f21b5eabd@11.2.