What is Light Energy?

What is Light Energy?

The sun emits an enormous amount of electromagnetic radiation (solar energy). Humans can see only a fraction of this energy, which portion is therefore referred to as “visible light.” The manner in which solar energy travels is described as waves.

Scientists can determine the amount of energy of a wave by measuring its wavelength, the distance between consecutive points of a wave. A single wave is measured from two consecutive points, such as from crest to crest or from trough to trough (see the figure below). 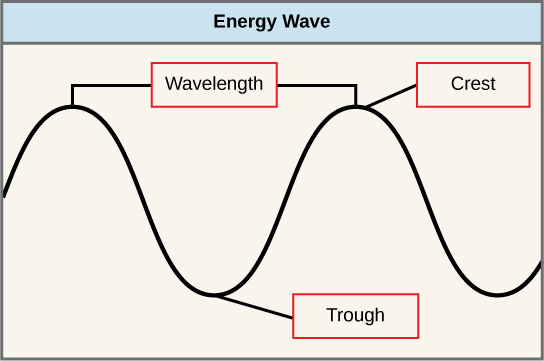 The wavelength of a single wave is the distance between two consecutive points of similar position (two crests or two troughs) along the wave.

The electromagnetic spectrum is the range of all possible frequencies of radiation (see the figure below). The difference between wavelengths relates to the amount of energy carried by them.

Each type of electromagnetic radiation travels at a particular wavelength. The longer the wavelength (or the more stretched out it appears in the diagram), the less energy is carried. Short, tight waves carry the most energy.

This may seem illogical, but think of it in terms of a piece of moving a heavy rope. It takes little effort by a person to move a rope in long, wide waves. To make a rope move in short, tight waves, a person would need to apply significantly more energy.

The electromagnetic spectrum (see the figure above) shows several types of electromagnetic radiation originating from the sun, including X-rays and ultraviolet (UV) rays. The higher-energy waves can penetrate tissues and damage cells and DNA, explaining why both X-rays and UV rays can be harmful to living organisms.