Main Structures and Summary of Photosynthesis

Main Structures and Summary of Photosynthesis

Photosynthesis is a multi-step process that requires sunlight, carbon dioxide (which is low in energy), and water as substrates (see the figure below).

After the process is complete, it releases oxygen and produces glyceraldehyde-3-phosphate (GA3P), simple carbohydrate molecules (which are high in energy) that can subsequently be converted into glucose, sucrose, or any of dozens of other sugar molecules. These sugar molecules contain energy and the energized carbon that all living things need to survive. 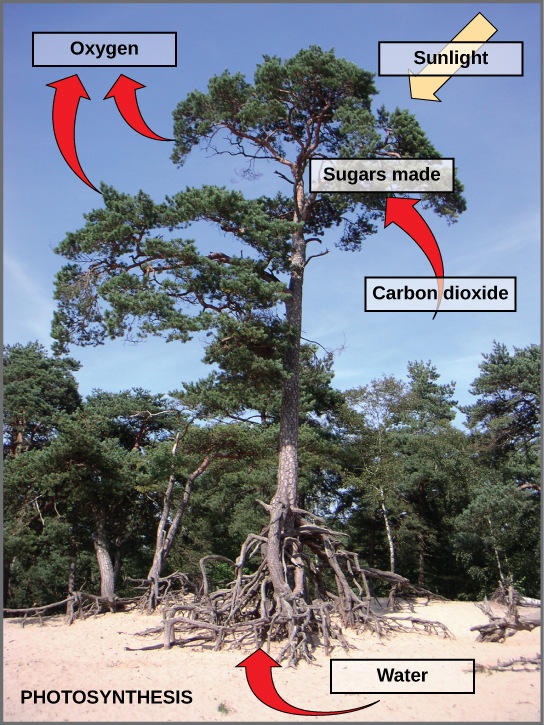 The following is the chemical equation for photosynthesis (see the figure below):

The basic equation for photosynthesis is deceptively simple. In reality, the process takes place in many steps involving intermediate reactants and products. Glucose, the primary energy source in cells, is made from two three-carbon GA3Ps.

Although the equation looks simple, the many steps that take place during photosynthesis are actually quite complex. Before learning the details of how photoautotrophs turn sunlight into food, it is important to become familiar with the structures involved.

In plants, photosynthesis generally takes place in leaves, which consist of several layers of cells. The process of photosynthesis occurs in a middle layer called the mesophyll. The gas exchange of carbon dioxide and oxygen occurs through small, regulated openings called stomata (singular: stoma), which also play roles in the regulation of gas exchange and water balance.

The stomata are typically located on the underside of the leaf, which helps to minimize water loss. Each stoma is flanked by guard cells that regulate the opening and closing of the stomata by swelling or shrinking in response to osmotic changes.

In all autotrophic eukaryotes, photosynthesis takes place inside an organelle called a chloroplast. For plants, chloroplast-containing cells exist in the mesophyll.

Chloroplasts have a double membrane envelope (composed of an outer membrane and an inner membrane). Within the chloroplast are stacked, disc-shaped structures called thylakoids. Embedded in the thylakoid membrane is chlorophyll, a pigment (molecule that absorbs light) responsible for the initial interaction between light and plant material, and numerous proteins that make up the electron transport chain.

The thylakoid membrane encloses an internal space called the thylakoid lumen. As shown in the figure below, a stack of thylakoids is called a granum, and the liquid-filled space surrounding the granum is called stroma or “bed” (not to be confused with stoma or “mouth,” an opening on the leaf epidermis). 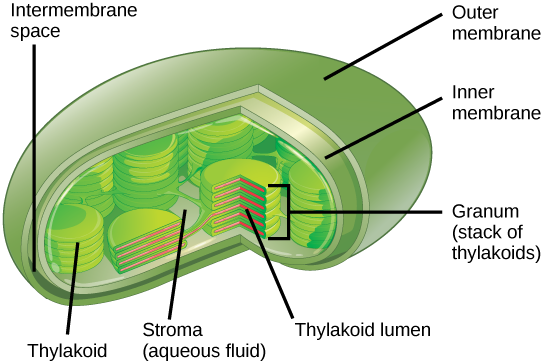 Photosynthesis takes place in chloroplasts, which have an outer membrane and an inner membrane. Stacks of thylakoids called grana form a third membrane layer.

On a hot, dry day, plants close their stomata to conserve water. What impact will this have on photosynthesis?

Levels of carbon dioxide (a necessary photosynthetic substrate) will immediately fall. As a result, the rate of photosynthesis will be inhibited.