Viscosity is the resistance to flow of a liquid. Think how easy it is to pour water compared to syrup or honey. The water flows much faster than the syrup or honey.

Viscosity is a measure of how much a liquid resists flowing. i.e. The higher the viscosity, the more viscous a substance is. 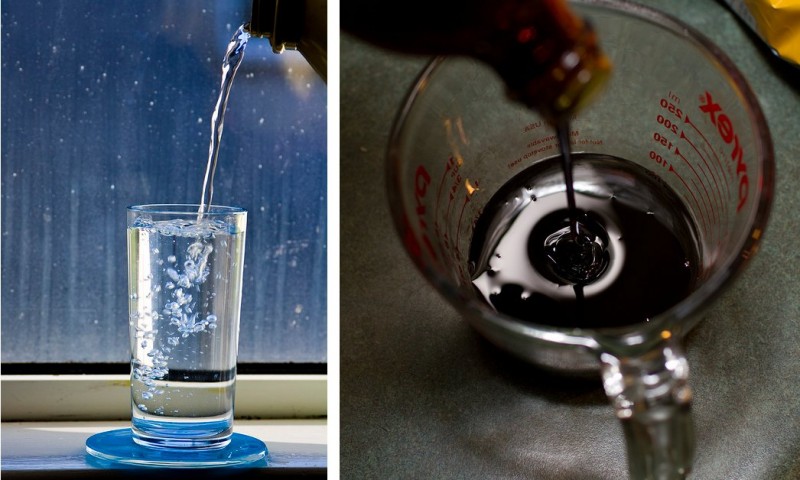 The higher the viscosity (red) the slower the ball moves through the liquid.

If the glass sheet is tilted to either side during the resistance to flow activity the drops will run into each other and the activity will not work. The drops should reach the finish line in the order of: alcohol (least viscous), water, oil, syrup (most viscous).

Place the glass flat on top of two pencils, then carefully put a drop of water on one end of the line. Leave at least \(\text{2}\) \(\text{cm}\) space next to the water drop, and carefully place a drop of alcohol. Repeat this with a drop of oil and a drop of syrup.

Slowly and carefully remove the pencil from the end opposite the drops (make sure you don’t tilt the glass to either side in the process).

Density is a measure of the mass per unit of volume.

The solid phase is often the most dense phase (water is one noteworthy exception to this). This can be explained by the strong intermolecular forces found in a solid. These forces pull the molecules together, which results in more molecules in one unit of volume than in the liquid or gas phases. The more molecules in a unit volume the denser, and heavier that volume of the substance will be.

Density can be used to separate different liquids, with the more dense liquid settling to the bottom of the container, while the less dense liquid floats on top. If you throw a leaf into a river or pond the leaf will float. If you instead throw a rock (with the same surface area and volume) into the river or pond the rock will sink. This is due to the different densities of the two substances: rocks are more dense than water while leaves are less dense than water.

This article has been modified from "Physical Properties And Structure, by Siyavula, Grade 12 Science, CC BY 4.0. Download the article for free at Siyavula.