The alkanes are hydrocarbons that only contain single covalent bonds between their carbon atoms. This means that they are saturated compounds and are quite unreactive. The simplest alkane has only one carbon atom and is called methane. This molecule is shown in the figure below.

The (a) structural and (b) molecular formula representations of methane.

The second alkane in the series has two carbon atoms and is called ethane. This is shown in the figure below. 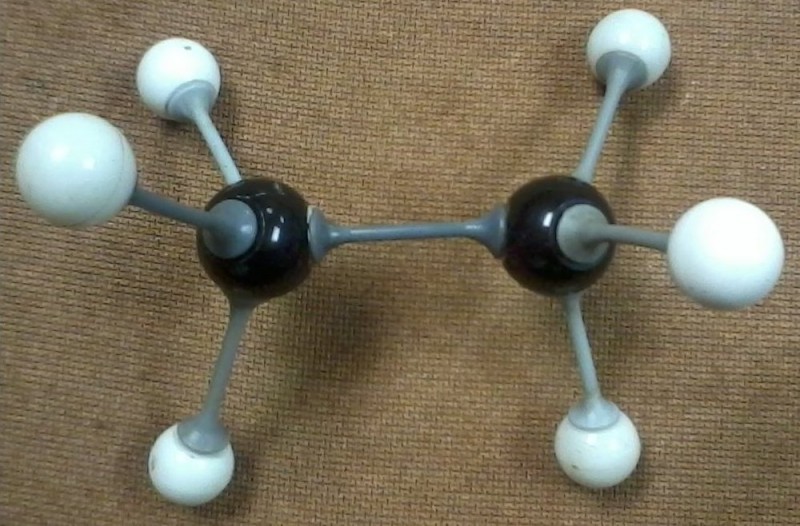 The (a) structural, (b) condensed structural and (c) molecular formula representations of ethane. (d) An atomic model of ethane.

The third alkane in the series has three carbon atoms and is called propane (see figure below). 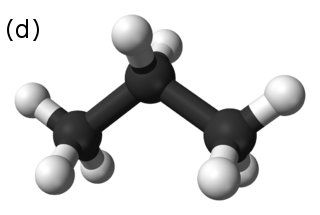 The (a) structural, (b) condensed structural and (c) molecular formula representations of propane. (d) A three-dimensional computer generated model of propane.

When you look at the molecular formula for each of the alkanes, you should notice a pattern developing. For each carbon atom that is added to the molecule, two hydrogen atoms are added. In other words, each molecule differs from the one before it by \(\text{CH}_{2}\). This is called a homologous series.

A homologous series is a series of compounds with the same general formula. All molecules in this series will contain the same functional groups.

Some fungi use alkanes as a source of carbon and energy. One fungus amorphotheca resinae (also known as kerosene fungus) prefers the alkanes used in aviation fuel, and this can cause problems for aircraft in tropical areas.

The general formula is similar to both the molecular formula and the condensed structural formula. The functional group is written as it would be in the condensed structural formula (to make it more obvious), while the rest of the atoms in the compound are written in the same style as the molecular formula. The alkanes have the general formula: \(\color{red}{\textbf{C}_{\textbf{n}}\textbf{H}_{\textbf{2n+2}}}\).