Straight chains always have higher boiling points than the equivalent molecule with branched chains. This is because the molecules with straight chains have a larger surface area that allows close contact. Branched chains have a lower boiling point due to a smaller area of contact. The molecules are more compact and cannot get too close together, resulting in fewer places for the van der Waals forces to act.

(a) Straight chains of pentane and (b) branched chains of 2-methylbutane. (Image by Duncan Watson)

Shown in the figure below are three isomers that all have the molecular formula \(\text{C}_{5}\text{H}_{12}\). They are all alkanes with the only difference being branched groups leading to longer or shorter main chains. 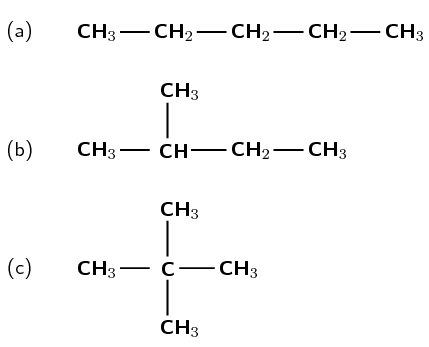 As shown in the table below, the properties of these three compounds are significantly different. The melting points have significant differences and the boiling points steadily decrease with an increasing number of branched groups.

Table: Properties of compounds with different numbers of branched groups.

Although the densities of all three compounds are very similar, there is a decrease in density with the increase of branched groups. The vapour pressure increases with increasing branched groups and the flash point of 2,2-dimethylpropane is significantly higher than those of pentane and 2-methylbutane.

It is interesting that the common trend of melting and boiling points is not followed here – 2,2-dimethylpropane has the highest melting point, lowest boiling point and is the least flammable although all three compounds are very flammable. Symmetrical molecules (such as 2,2-dimethylpropane) tend to have higher melting points than similar molecules with less symmetry due to their packing in the solid state. Once in the liquid state they follow the normal trends.

This article has been modified from "Physical Properties And Structure, by Siyavula, Grade 12 Science, CC BY 4.0. Download the article for free at Siyavula.