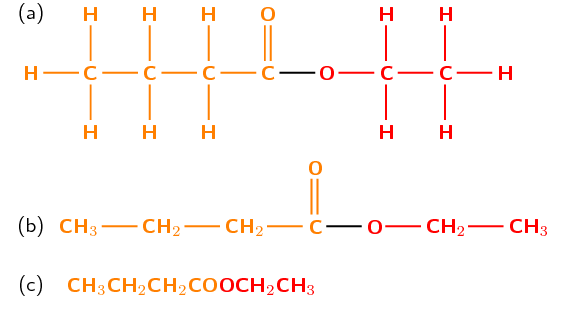 The (a) structural, (b) semi-structural structural and (c) condensed structural representations of \(\color{red}{\textbf{ethyl}}\color{orange}{\textbf{ butanoate}}\).

Give the IUPAC name for the following compound:

There is a \(-\)C\(=\)O (carbonyl) group as well as an oxygen atom bonded to the carbon atom of the carbonyl and another carbon atom. This is therefore an ester and the suffix is -oate.

An ester is a carboxylic acid derivative. Divide the molecule in two with the carbonyl group on one side and the oxygen bonded to two carbon atoms on the other.

Combine the elements of the compound’s name into a single word in the order of chain from the alcohol; prefix (from chain containing carbonyl functional group), name ending according to functional group

The compound’s name is methyl propanoate.

Draw the structural and condensed structural representations for the organic compound ethyl hexanoate.

The compound has the suffix -oate. It is therefore an ester and has a \(-\)C\(=\)O (carbonyl) group as well as an oxygen atom bonded to the carbon atom of the carbonyl and another carbon atom.

Place the functional group as well as any branched groups

The oxygen atom bonded to two different carbon atoms is located between the two sections. The \(-\)C\(=\)O (carbonyl) group is located at the first carbon atom of the carboxylic acid chain.

Combine this information and add the hydrogen atoms

This article has been modified from "Iupac Naming And Formulae, by Siyavula, Grade 12 Science, CC BY 4.0. Download the article for free at Siyavula.