Both butane and 2-methylpropane (isobutane) are used in camping stoves and lighters.

If you were to count the number of carbon and hydrogen atoms in each compound, you would find that they are the same. They both have the same molecular formula \(\text{C}_{4}\text{H}_{10}\), but their structure is different and so are their properties. Such compounds are called isomers.

In chemistry, isomers are molecules with the same molecular formula but different structural formula.

Isomers are molecules with the same molecular formula and often (though not always) with the same kinds of chemical bonds between atoms, but with the atoms arranged differently.

The isomers shown above differ only in the location of the carbon atoms. The functional groups are the same but butane has all four carbons in one chain, while 2-methylpropane has three carbons in the longest chain and a methyl group attached to the second carbon in the chain. It is also possible to have positional isomers (see figure below). In this case the \(-\text{OH}\) functional group can be on different carbon atoms, for example carbon 1 for pentan-1-ol, on carbon 2 for pentan-2-ol or on carbon 3 for pentan-3-ol. 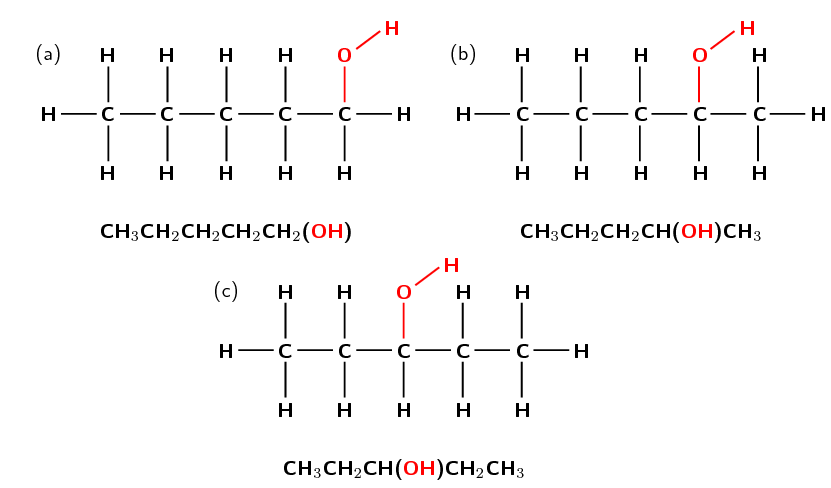 The structural and condensed structural representations of the isomers (a) pentan-1-ol, (b) pentan-2-ol and (c) pentan-3-ol.

The structural representations of the isomers (a) ethyl hexanoate and (b) hexyl ethanoate.

Table: Some properties of the isomers propanone and propanal. 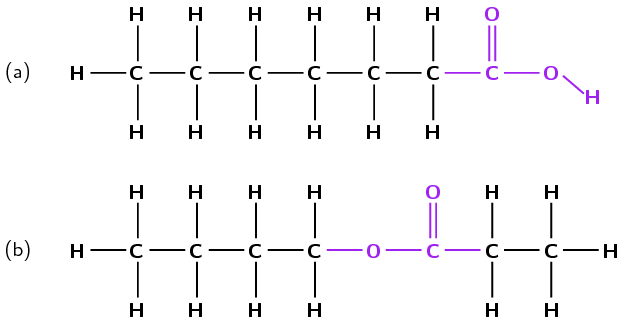 The structural representations of the isomers (a) heptanoic acid and (b) butyl propanoate.

Table: The different physical properties of the isomers heptanoic acid and butyl propanoate.