Alkyl halides are hydrocarbons with one hydrogen atom replaced by a halogen atom (F, Cl, Br, I). The alkyl is due to the fact that a hydrocarbon branched group has the suffix -yl and is one of the three hydrocarbons: alkanes, alkenes or alkynes. These alkyl groups contain one or more halogen atoms, which leads to the name alkyl halides. Our focus will be on the alkane alkyl halides also known as the haloalkanes (or halogenoalkanes).

Representations of a halomethane where X can be F, Cl, Br or I: (a) structural, (b) molecular formula, (c) 3-D line drawing, (d) 3-D ball and stick model and e) 3-D space-filling model. 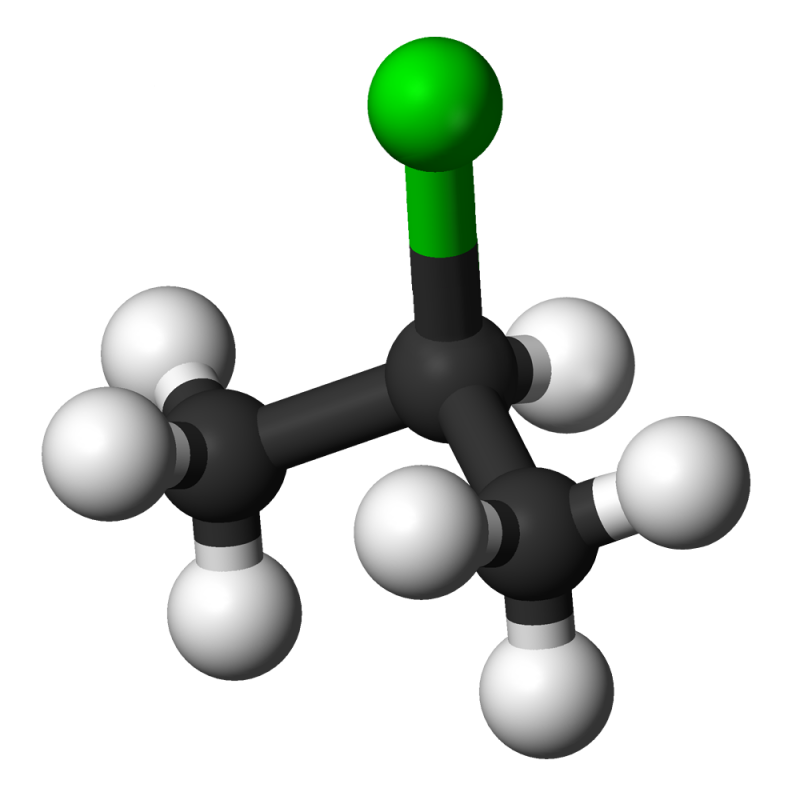 Representations of 2-halopropane where X can be F, Cl, Br or I: (a) structural, (b) condensed structural, (c) molecular formula and (d) a ball and stick model.

Note that the halogen atom is called a substituent.

A fluorine atom as a substituent on carbon 2 of butane (2-fluorobutane).

A methyl branched group on carbon 2 of butane (2-methylbutane).

A substituent is an atom or group of atoms bonded to a carbon chain. This can be an inorganic atom (e.g. halogen) or an alkyl group that is shorter than the main group.

CFC stands for chlorofluorocarbons. Due to their low toxicity and low reactivity, CFCs were widely used in refrigeration and as propellants in aerosols. However, the low reactivity means that CFCs can get into the upper atmosphere where they are degraded by UV light and damage the ozone layer.

An organic compound is always named in accordance with the longest chain of carbon atoms that contains the functional group. If the substituent is an alkyl group it is known as a branched chain.

Some uses of haloalkanes include:

Chloroform (\(\text{CHCl}_{3}\)) was used as an anesthetic for years. However, aside from causing dizziness, fatigue and headaches, it was discovered to be toxic, often fatally so. Even non-fatal doses can cause damage to the kidneys and liver. Chloroform can sometimes be found in cough syrups, although not often anymore.

Haloalkanes can contain more than one halogen atom. Chloromethanes are substances that can be used as anaesthetics during operations. One example is trichloromethane, also known as chloroform (see figure below).

The (a) structural and (b) molecular formula representations of trichloromethane (chloroform).