Structure of an Amino Acid

Amino acids are the monomers that make up proteins. Each amino acid has the same fundamental structure , which consists of a central carbon atom, also known as the alpha (α) carbon, bonded to an amino group (NH2), a carboxyl group (COOH), and to a hydrogen atom. In the aqueous environment of the cell, the both the amino group and the carboxyl group are ionized under physiological conditions, and so have the structures -NH3+ and -COO–, respectively. Every amino acid also has another atom or group of atoms bonded to the central atom known as the R group. This R group, or side chain, gives each amino acid proteins specific characteristics, including size, polarity, and pH.

The name “amino acid” is derived from the amino group and carboxyl-acid-group in their basic structure. There are 21 amino acids present in proteins, each with a specific R group or side chain. Ten of these are considered essential amino acids in humans because the human body cannot produce them and they must be obtained from the diet. All organisms have different essential amino acids based on their physiology. 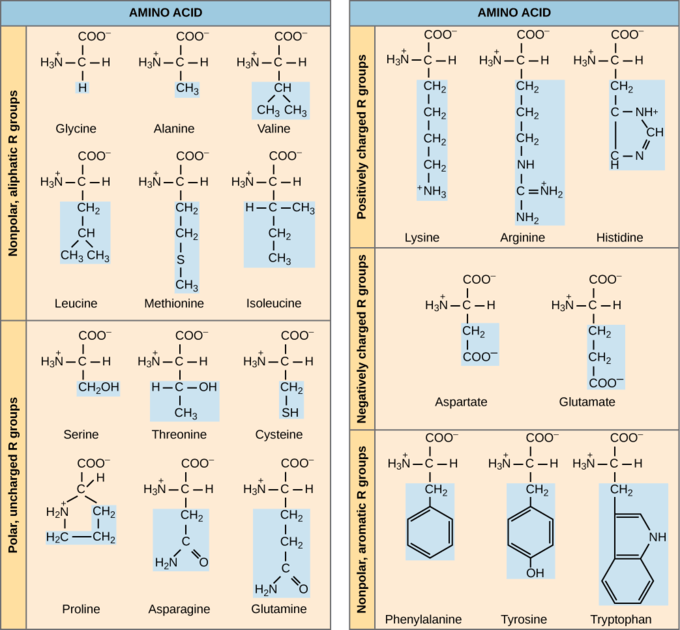 Types of amino acids: There are 21 common amino acids commonly found in proteins, each with a different R group (variant group) that determines its chemical nature. The 21st amino acid, not shown here, is selenocysteine, with an R group of -CH2-SeH.

The chemical composition of the side chain determines the characteristics of the amino acid. Amino acids such as valine, methionine, and alanine are nonpolar (hydrophobic), while amino acids such as serine, threonine, and cysteine are polar (hydrophilic). The side chains of lysine and arginine are positively charged so these amino acids are also known as basic (high pH) amino acids. Proline is an exception to the standard structure of an animo acid because its R group is linked to the amino group, forming a ring-like structure.

Amino acids are represented by a single upper case letter or a three-letter abbreviation. For example, valine is known by the letter V or the three-letter symbol val. 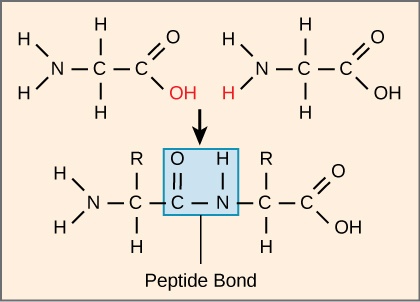 The resulting chain of amino acids is called a polypeptide chain. Each polypeptide has a free amino group at one end. This end is called the N terminal, or the amino terminal, and the other end has a free carboxyl group, also known as the C or carboxyl terminal. When reading or reporting the amino acid sequence of a protein or polypeptide, the convention is to use the N-to-C direction. That is, the first amino acid in the sequence is assumed to the be one at the N terminal and the last amino acid is assumed to be the one at the C terminal.

Although the terms polypeptide and protein are sometimes used interchangeably, a polypeptide is technically any polymer of amino acids, whereas the term protein is used for a polypeptide or polypeptides that have folded properly, combined with any additional components needed for proper functioning, and is now functional.