Carbon atoms linked by a double bond are bound together by two bonds, one σ bond and one π bond. Double and triple bonds give rise to a different geometry around the carbon atom that participates in them, leading to important differences in molecular shape and properties. The differing geometries are responsible for the different properties of unsaturated versus saturated fats.

Ethene, C2H4, is the simplest alkene. Each carbon atom in ethene, commonly called ethylene, has a trigonal planar structure. The second member of the series is propene (propylene) (see the figure below); the butene isomers follow in the series. Four carbon atoms in the chain of butene allows for the formation of isomers based on the position of the double bond, as well as a new form of isomerism.

Expanded structures, ball-and-stick structures, and space-filling models for the alkenes ethene, propene, and 1-butene are shown.

Ethylene (the common industrial name for ethene) is a basic raw material in the production of polyethylene and other important compounds. Over 135 million tons of ethylene were produced worldwide in 2010 for use in the polymer, petrochemical, and plastic industries. Ethylene is produced industrially in a process called cracking, in which the long hydrocarbon chains in a petroleum mixture are broken into smaller molecules. 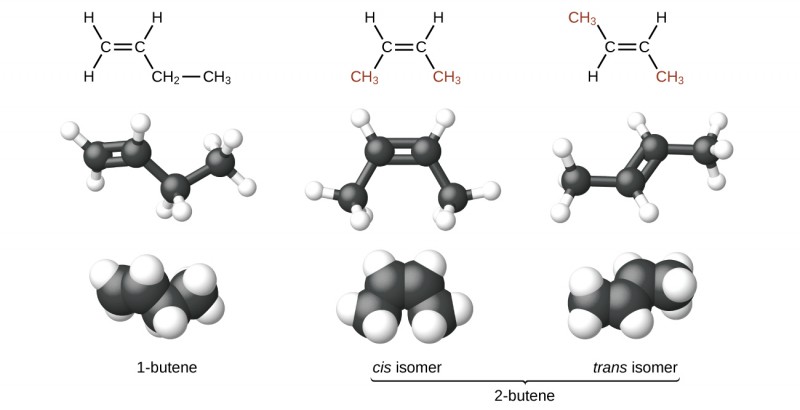 These molecular models show the structural and geometric isomers of butene.

Alkenes are much more reactive than alkanes because the \(\text{C}=\text{C}\)\(\text{C}=\text{C}\) moiety is a reactive functional group. A π bond, being a weaker bond, is disrupted much more easily than a σ bond. Thus, alkenes undergo a characteristic reaction in which the π bond is broken and replaced by two σ bonds. This reaction is called an addition reaction. The hybridization of the carbon atoms in the double bond in an alkene changes from sp2 to sp3 during an addition reaction. For example, halogens add to the double bond in an alkene instead of replacing hydrogen, as occurs in an alkane:

Provide the IUPAC names for the reactant and product of the halogenation reaction shown here:

This molecule is now a substituted alkane and will be named as such. The base of the name will be pentane. We will count from the end that numbers the carbon atoms where the chlorine atoms are attached as 2 and 3, making the name of the product 2,3-dichloropentane.