Alkanes, or saturated hydrocarbons, contain only single covalent bonds between carbon atoms. Each of the carbon atoms in an alkane has sp3 hybrid orbitals and is bonded to four other atoms, each of which is either carbon or hydrogen. The Lewis structures and models of methane, ethane, and pentane are illustrated in the figure below.

Carbon chains are usually drawn as straight lines in Lewis structures, but one has to remember that Lewis structures are not intended to indicate the geometry of molecules. Notice that the carbon atoms in the structural models (the ball-and-stick and space-filling models) of the pentane molecule do not lie in a straight line. Because of the sp3 hybridization, the bond angles in carbon chains are close to 109.5°, giving such chains in an alkane a zigzag shape.

The structures of alkanes and other organic molecules may also be represented in a less detailed manner by condensed structural formulas (or simply, condensed formulas). Instead of the usual format for chemical formulas in which each element symbol appears just once, a condensed formula is written to suggest the bonding in the molecule. These formulas have the appearance of a Lewis structure from which most or all of the bond symbols have been removed. Condensed structural formulas for ethane and pentane are shown at the bottom of the figure below, and several additional examples are provided in the exercises at the end of this tutorial.

Pictured are the Lewis structures, ball-and-stick models, and space-filling models for molecules of methane, ethane, and pentane.

A common method used by organic chemists to simplify the drawings of larger molecules is to use a skeletal structure (also called a line-angle structure). In this type of structure, carbon atoms are not symbolized with a C, but represented by each end of a line or bend in a line. Hydrogen atoms are not drawn if they are attached to a carbon. Other atoms besides carbon and hydrogen are represented by their elemental symbols. The figure below shows three different ways to draw the same structure.

The same structure can be represented three different ways: an expanded formula, a condensed formula, and a skeletal structure.

Draw the skeletal structures for these two molecules:

Each carbon atom is converted into the end of a line or the place where lines intersect. All hydrogen atoms attached to the carbon atoms are left out of the structure (although we still need to recognize they are there):

Identify the chemical formula of the molecule represented here:

Location of the hydrogen atoms:

All alkanes are composed of carbon and hydrogen atoms, and have similar bonds, structures, and formulas; noncyclic alkanes all have a formula of CnH2n+2. The number of carbon atoms present in an alkane has no limit. Greater numbers of atoms in the molecules will lead to stronger intermolecular attractions (dispersion forces) and correspondingly different physical properties of the molecules. Properties such as melting point and boiling point (see the table below) usually change smoothly and predictably as the number of carbon and hydrogen atoms in the molecules change.

Hydrocarbons with the same formula, including alkanes, can have different structures. For example, two alkanes have the formula C4H10: They are called n-butane and 2-methylpropane (or isobutane), and have the following Lewis structures:

The compounds n-butane and 2-methylpropane are structural isomers (the term constitutional isomers is also commonly used). Constitutional isomers have the same molecular formula but different spatial arrangements of the atoms in their molecules. The n-butane molecule contains an unbranched chain, meaning that no carbon atom is bonded to more than two other carbon atoms. We use the term normal, or the prefix n, to refer to a chain of carbon atoms without branching. The compound 2–methylpropane has a branched chain (the carbon atom in the center of the Lewis structure is bonded to three other carbon atoms) 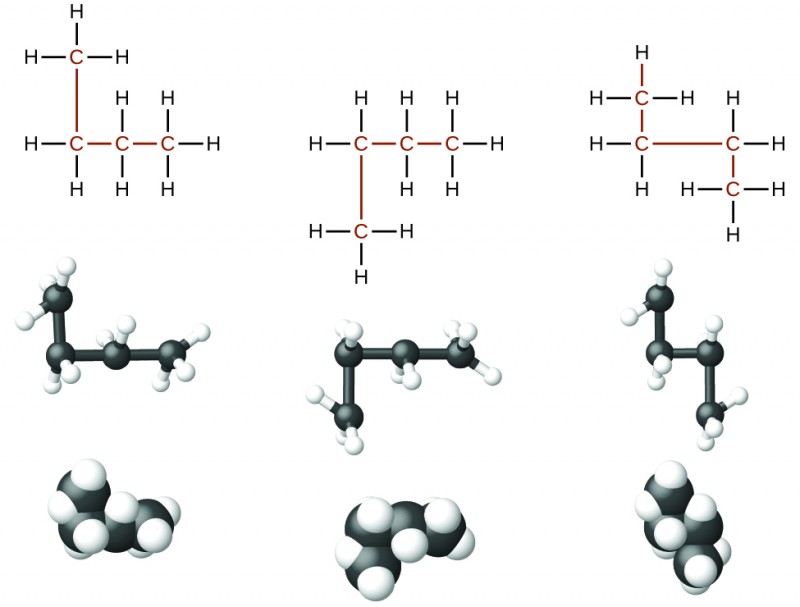 These three representations of the structure of n-butane are not isomers because they all contain the same arrangement of atoms and bonds.