For a paper on the history of the photoelectric effect and the analysis of its treatmentin a variety of textbooks see: http://onlinelibrary.wiley.com/doi/10.1002/sce.20389/pdf

Einstein’s model is consistent with the observation that the electrons wereemitted immediately when light was shone on the metal and that the intensity of the light made no difference to the maximum kinetic energy of the emitted electrons.

The minimum energy needed to knock an electron out of a metal is called the work function (symbol \(W_{0}\)) of the metal. As it is energy, it measured in joules (J).

Energy is conserved so if the photon has a higher energy than \(W_{0}\)then the excess energy goes into the kinetic energy \({E}_{k}\) of the electronthat was emitted fromthe substance.

This equation is known as the photoelectric equation.

The last piece of the puzzle is now clear, the question was `why does increasing theintensity of the light not affect the maximum kinetic energy of the emitted photons?’. The answeris that each emitted electron has absorbed one photon, increasingthe intensity just increases the number of photons (we expect more electrons but we don’t expecttheir maximum kinetic energy to change).

The discovery and understanding of the photoelectric effect was one of the major breakthroughs in science in the twentieth century as it provided concrete evidence of the particle nature of light. It overturned previously held views that light was composed purely of a continuous transverse wave. On the one hand, the wave nature is a good description of phenomena such as diffraction and interference for light, and on the other hand, the photoelectric effect demonstrates the particle nature of light. This is now known as the ‘dual-nature’ of light. (dual means two)

Einstein won the 1921 Nobel Prize for Physics for this quantum theory and his explanation of the photoelectric effect. 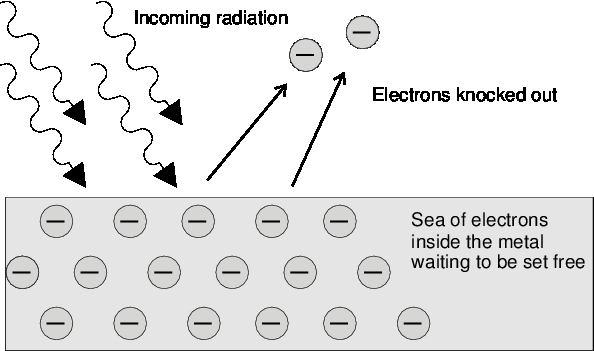 We can observe this effect in the following practical demonstration of photoelectric emission. A zinc plate is charged negatively and placed onto the cap of an electroscope. In the figure below, red light is shone onto the zinc plate. There is no change observed even if the intensity (brightness) of the red light is increased. In the second figure below, ultraviolet light of low intensity is shone onto the zinc and it is observed that the leaf of the electroscope collapse. This allows us to conclude that the negative charge on the plate decreased as electrons were ejected from the metal when the ultraviolet light was incident on the plate. 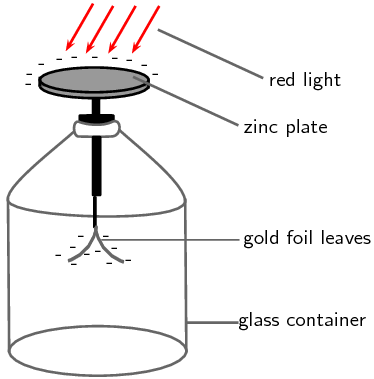 Red light incident on the zinc plate of an electroscope. 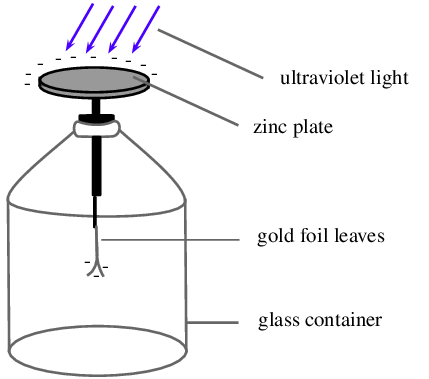 Ultraviolet light incident on the zinc plate of an electroscope.

Optional Video: What is the Wave/Particle Duality? – Part 1

The work function is different for different elements. The smaller the work function, the easier it is for electrons to be emitted from the metal. Metals with low work functions make good conductors. This is because the electrons are attached less strongly to their surroundings and can move more easily through these materials. This reduces the resistance of the material to the flow of current i.e. it conducts well. The table below shows the work functions for a range of elements.

Table: Work functions of selected elements determined from the photoelectric effect. (From the Handbook of Chemistry and Physics.)

This article has been modified from "The Photoelectric Effect, by Siyavula, Grade 12 Science, CC BY 4.0. Download the article for free at Siyavula.

This is a lesson from the tutorial, Optics and Optical Phenomena and you are encouraged to log in or register, so that you can track your progress.