Graphs of Motion when a is constant but a ≠ 0

The graphs in the figure below represent the motion of the jet-powered car as it accelerates toward its top speed, but only during the time when its acceleration is constant. Time starts at zero for this motion (as if measured with a stopwatch), and the position and velocity are initially \(200\text{ m}\) and \(15\text{ m/s},\) respectively.

Graphs of motion of a jet-powered car during the time span when its acceleration is constant. (a) The slope of an \(x\) vs. \(t\) graph is velocity. This is shown at two points, and the instantaneous velocities obtained are plotted in the next graph. Instantaneous velocity at any point is the slope of the tangent at that point. (b) The slope of the \(v\) vs. \(t\) graph is constant for this part of the motion, indicating constant acceleration. (c) Acceleration has the constant value of \(5.0\text{ m/s}^2\) over the time interval plotted. Image credit: OpenStax, College Physics 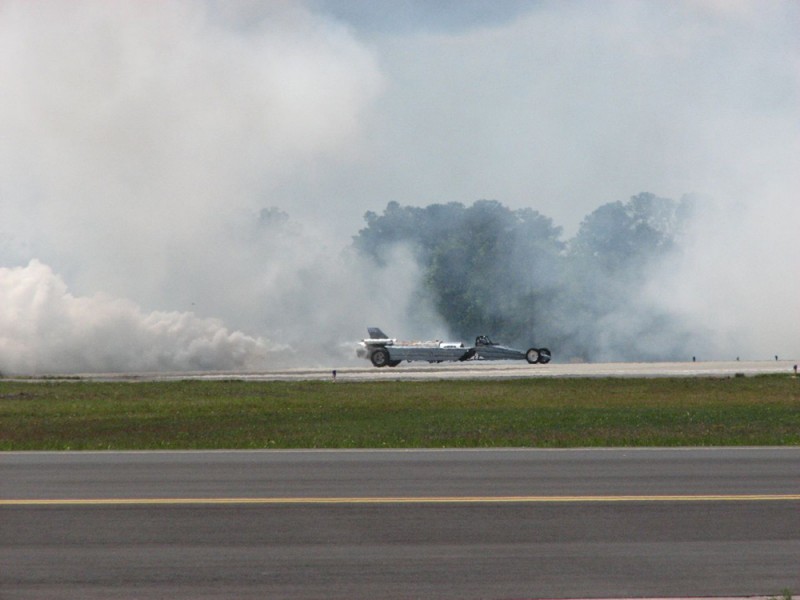 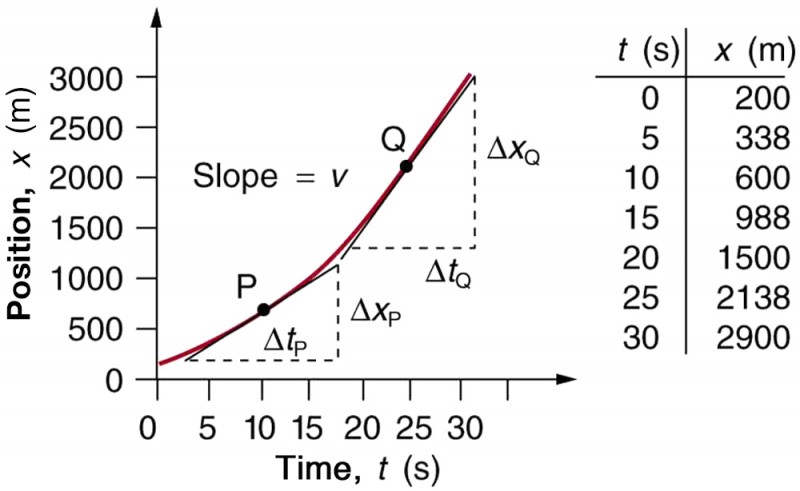 The slope of an \(x\) vs. \(t\) graph is velocity. This is shown at two points. Instantaneous velocity at any point is the slope of the tangent at that point. Image credit: OpenStax, College Physics

The slope of a curve at a point is equal to the slope of a straight line tangent to the curve at that point. This principle is illustrated in the figure above, where Q is the point at \(t = 25\text{ s}.\)

3. Plug these endpoints into the equation to solve for the slope, \(v\).

Carrying this one step further, we note that the slope of a velocity versus time graph is acceleration. Slope is rise divided by run; on a \(v\) vs. \(t\) graph, rise = change in velocity \(\Delta v\) and run = change in time \(\Delta t\).

The Slope of v vs. t

Additional general information can be obtained from the figure and the expression for a straight line, \(y = mx + b\).

A general relationship for velocity, acceleration, and time has again been obtained from a graph. Notice that this equation was also derived algebraically from other motion equations in the previous lessons.

It is not accidental that the same equations are obtained by graphical analysis as by algebraic techniques. In fact, an important way to discover physical relationships is to measure various physical quantities and then make graphs of one quantity against another to see if they are correlated in any way.

Correlations imply physical relationships and might be shown by smooth graphs such as those above. From such graphs, mathematical relationships can sometimes be postulated. Further experiments are then performed to determine the validity of the hypothesized relationships.

This is a lesson from the tutorial, One-Dimensional Kinematics and you are encouraged to log in or register, so that you can track your progress.