Example on Calculating Position and Velocity of a Falling Object: A Rock Thrown Upward

A person standing on the edge of a high cliff throws a rock straight up with an initial velocity of 13.0 m/s. The rock misses the edge of the cliff as it falls back to earth. Calculate the position and velocity of the rock 1.00 s, 2.00 s, and 3.00 s after it is thrown, neglecting the effects of air resistance.

We are asked to determine the position \(y\) at various times. It is reasonable to take the initial position \(y_0\) to be zero. This problem involves one-dimensional motion in the vertical direction. We use plus and minus signs to indicate direction, with up being positive and down negative.

3. Plug in the knowns and solve.

The procedures for calculating the position and velocity at \(t = 2.00\text{ s}\) and \(3.00\text{ s}\) are the same as those above. The results are summarized in the table below and illustrated in the figure below.

Graphing the data helps us understand it more clearly. 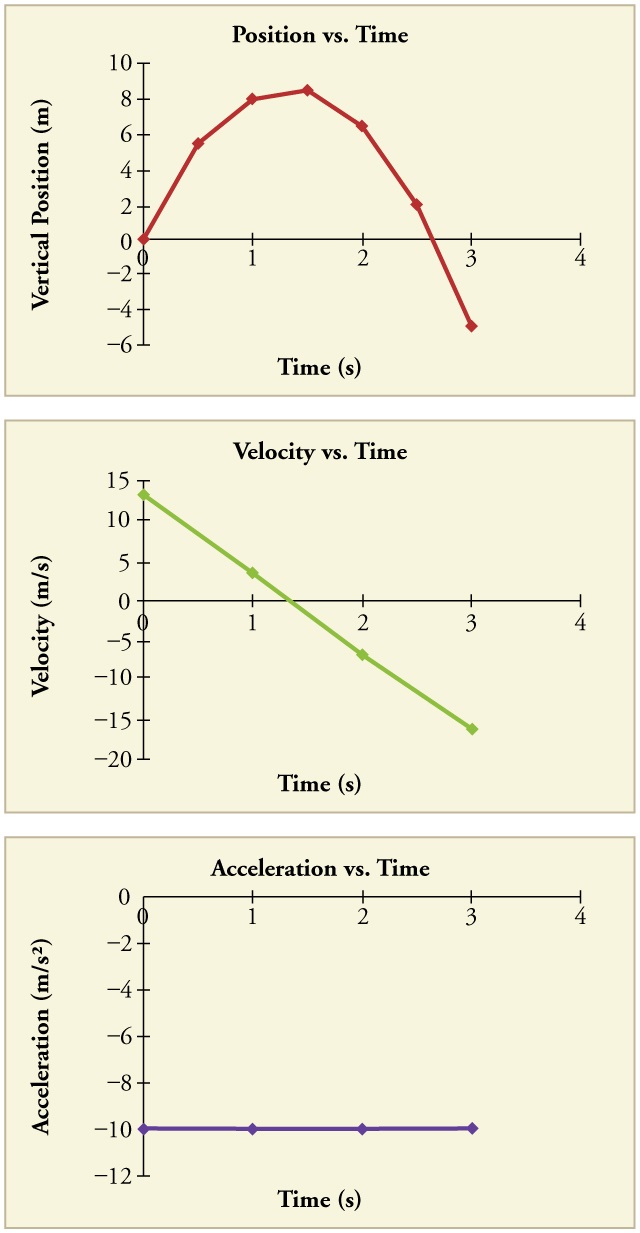 Vertical position, vertical velocity, and vertical acceleration vs. time for a rock thrown vertically up at the edge of a cliff. Notice that velocity changes linearly with time and that acceleration is constant. Misconception Alert! Notice that the position vs. time graph shows vertical position only. It is easy to get the impression that the graph shows some horizontal motion—the shape of the graph looks like the path of a projectile. But this is not the case; the horizontal axis is time, not space. The actual path of the rock in space is straight up, and straight down. Image credit: OpenStax, College Physics

Notice that when the rock is at its highest point (at 1.5 s), its velocity is zero, but its acceleration is still −9.80 m/s2. Its acceleration is −9.80 m/s2 for the whole trip—while it is moving up and while it is moving down. Note that the values for \(y\) are the positions (or displacements) of the rock, not the total distances traveled. Finally, note that free-fall applies to upward motion as well as downward. Both have the same acceleration—the acceleration due to gravity, which remains constant the entire time. Astronauts training in the famous Vomit Comet, for example, experience free-fall while arcing up as well as down, as we will discuss in more detail later.

This is a lesson from the tutorial, One-Dimensional Kinematics and you are encouraged to log in or register, so that you can track your progress.