Effects of Long-term Radiation Exposure On the Human Body

Effects of Long-term Radiation Exposure on the Human Body

The effects of radiation depend on the type, energy, and location of the radiation source, and the length of exposure. As shown in the figure below, the average person is exposed to background radiation, including cosmic rays from the sun and radon from uranium in the ground (see the lesson on Radon Exposure); radiation from medical exposure, including CAT scans, radioisotope tests, X-rays, and so on; and small amounts of radiation from other human activities, such as airplane flights (which are bombarded by increased numbers of cosmic rays in the upper atmosphere), radioactivity from consumer products, and a variety of radionuclides that enter our bodies when we breathe (for example, carbon-14) or through the food chain (for example, potassium-40, strontium-90, and iodine-131). 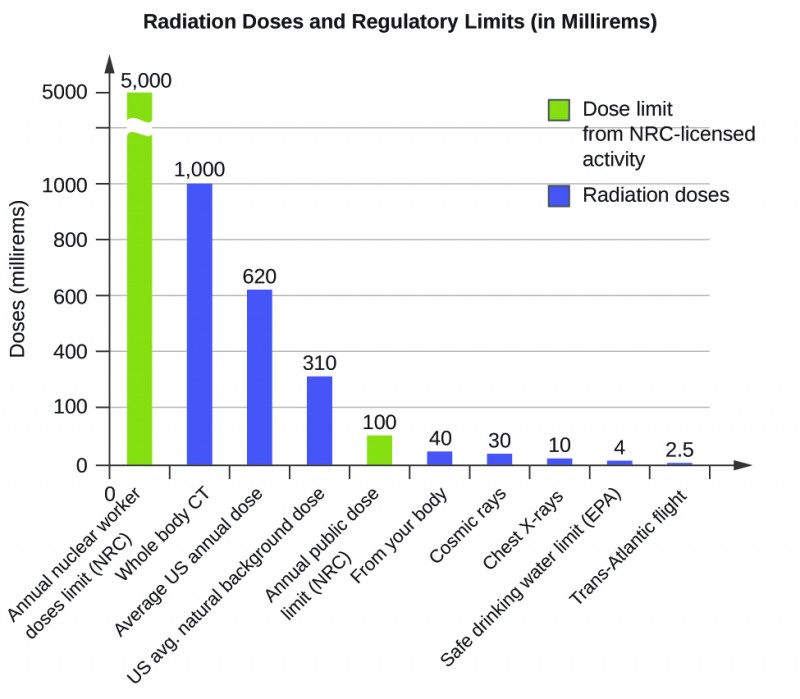 The total annual radiation exposure for a person in the US is about 620 mrem. The various sources and their relative amounts are shown in this bar graph. (source: U.S. Nuclear Regulatory Commission)

A short-term, sudden dose of a large amount of radiation can cause a wide range of health effects, from changes in blood chemistry to death. Short-term exposure to tens of rems of radiation will likely cause very noticeable symptoms or illness; a dose of about 500 rems is estimated to have a 50% probability of causing the death of the victim within 30 days of exposure. Exposure to radioactive emissions has a cumulative effect on the body during a person’s lifetime, which is another reason why it is important to avoid any unnecessary exposure to radiation. Health effects of short-term exposure to radiation are shown in the table below.

It is impossible to avoid some exposure to ionizing radiation. We are constantly exposed to background radiation from a variety of natural sources, including cosmic radiation, rocks, medical procedures, consumer products, and even our own atoms. We can minimize our exposure by blocking or shielding the radiation, moving farther from the source, and limiting the time of exposure.