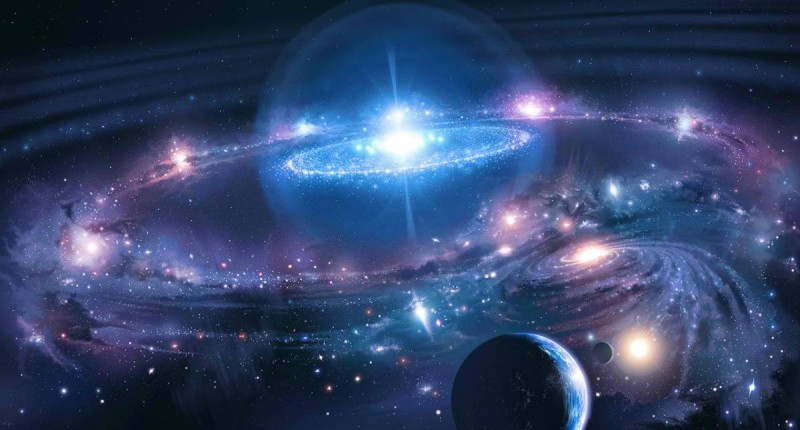 The magnitude of the attractive gravitational force between the two point masses, F is given by: \[F=G\frac{m_1m_2}{d^2}\]

where:\(F\) is in newtons (N), \(G\) is the gravitational constant \(\text{6.67} \times \text{10}^{-\text{11}}\) \(\text{N·m$^{2}$·kg$^{-2}$}\), \({m}_{1}\) is the mass of the first point mass in kilograms (kg), \({m}_{2}\) is the mass of the second point mass in kilograms (kg) and \(d\) is the distance between the two point masses in metres (m). For any large objects (not point masses) we use the distance from the centre of the object(s) to do the calculation. This is very important when dealing with very large objects like planets. The distance from the centre of the planet and from the surface of the planet differ by a large amount. Remember that this is a force of attraction and should be described by a vector. We use Newton’s law of universal gravitation to determine the magnitude of the force and then analyse the problem to determine thedirection.

As you can see, these forces are very small.

From this example you can see that the force is very large.

These two examples demonstrate that the greater the masses, the greater the force between them. The \(1/{d}^{2}\) factor tells us that the distance between the two bodies plays a role as well. The closer two bodies are, thestronger the gravitational force between them is. We feel the gravitational attraction of the Earth most at the surface since that is the closest we can get to it, but if we were in outer-space, we would barely feel the effect of the Earth’s gravity!

Remember that \(\vec{F}=m\vec{a}\) which means that every object on Earth feels the same gravitational acceleration! That means whether you drop a pen or a book (from the same height), they will both take the same length of time to hit the ground… in fact they will be head to head for the entire fall if you drop them at thesame time. We can show this easily by using Newton’s second law and the equation for the gravitational force. The force between the Earth (which has the mass \({M}_{\text{Earth}}\)) and an object of mass \({m}_{o}\) is

This article has been modified from "Forces Between Masses, by Siyavula, Physical Sciences Grade 10, CC BY 4.0. Download the book for free at www.siyavula.com.

This is a lesson from the tutorial, Newton's Laws and you are encouraged to log in or register, so that you can track your progress.