Myelinated axons make up the “white matter” and neuron and glial cell bodies make up the “gray matter.” Gray matter is also composed of interneurons, which connect two neurons each located in different parts of the body. Axons and cell bodies in the dorsal (facing the back of the animal) spinal cord convey mostly sensory information from the body to the brain. Axons and cell bodies in the ventral (facing the front of the animal) spinal cord primarily transmit signals controlling movement from the brain to the body.

The spinal cord also controls motor reflexes. These reflexes are quick, unconscious movements—like automatically removing a hand from a hot object. Reflexes are so fast because they involve local synaptic connections. For example, the knee reflex that a doctor tests during a routine physical is controlled by a single synapse between a sensory neuron and a motor neuron. While a reflex may only require the involvement of one or two synapses, synapses with interneurons in the spinal column transmit information to the brain to convey what happened (the knee jerked, or the hand was hot). 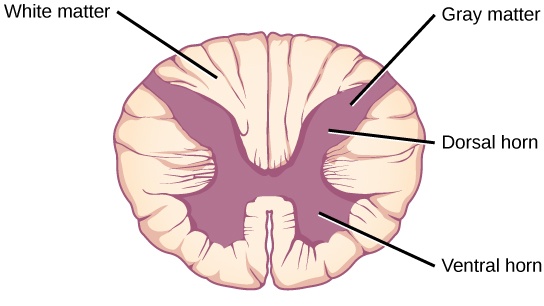