Additionally, one neuron often has inputs from many presynaptic neurons—some excitatory and some inhibitory—so IPSPs can cancel out EPSPs and vice versa. It is the net change in postsynaptic membrane voltage that determines whether the postsynaptic cell has reached its threshold of excitation needed to fire an action potential. Together, synaptic summation and the threshold for excitation act as a filter so that random “noise” in the system is not transmitted as important information. 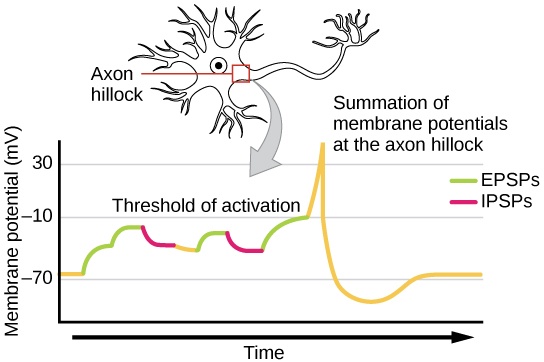 A single neuron can receive both excitatory and inhibitory inputs from multiple neurons, resulting in local membrane depolarization (EPSP input) and hyperpolarization (IPSP input). All these inputs are added together at the axon hillock. If the EPSPs are strong enough to overcome the IPSPs and reach the threshold of excitation, the neuron will fire.

Amyotrophic lateral sclerosis (ALS, also called Lou Gehrig’s Disease) is a neurological disease characterized by the degeneration of the motor neurons that control voluntary movements. The disease begins with muscle weakening and lack of coordination and eventually destroys the neurons that control speech, breathing, and swallowing; in the end, the disease can lead to paralysis. At that point, patients require assistance from machines to be able to breathe and to communicate. Several special technologies have been developed to allow “locked-in” patients to communicate with the rest of the world. One technology, for example, allows patients to type out sentences by twitching their cheek. These sentences can then be read aloud by a computer.

A relatively new line of research for helping paralyzed patients, including those with ALS, to communicate and retain a degree of self-sufficiency is called brain-computer interface (BCI) technology and is illustrated in the figure below. This technology sounds like something out of science fiction: it allows paralyzed patients to control a computer using only their thoughts. There are several forms of BCI. Some forms use EEG recordings from electrodes taped onto the skull. These recordings contain information from large populations of neurons that can be decoded by a computer.

Other forms of BCI require the implantation of an array of electrodes smaller than a postage stamp in the arm and hand area of the motor cortex. This form of BCI, while more invasive, is very powerful as each electrode can record actual action potentials from one or more neurons. These signals are then sent to a computer, which has been trained to decode the signal and feed it to a tool—such as a cursor on a computer screen. This means that a patient with ALS can use e-mail, read the Internet, and communicate with others by thinking of moving his or her hand or arm (even though the paralyzed patient cannot make that bodily movement). Recent advances have allowed a paralyzed locked-in patient who suffered a stroke 15 years ago to control a robotic arm and even to feed herself coffee using BCI technology.

Despite the amazing advancements in BCI technology, it also has limitations. The technology can require many hours of training and long periods of intense concentration for the patient; it can also require brain surgery to implant the devices. 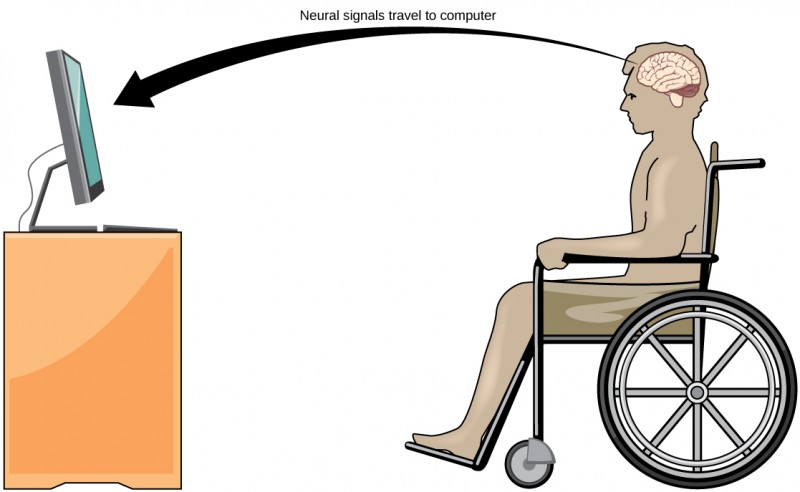 With brain-computer interface technology, neural signals from a paralyzed patient are collected, decoded, and then fed to a tool, such as a computer, a wheelchair, or a robotic arm.

Watch this video in which a paralyzed woman use a brain-controlled robotic arm to bring a drink to her mouth, among other images of brain-computer interface technology in action.