The sensory-somatic nervous system is made up of cranial and spinal nerves and contains both sensory and motor neurons. Sensory neurons transmit sensory information from the skin, skeletal muscle, and sensory organs to the CNS. Motor neurons transmit messages about desired movement from the CNS to the muscles to make them contract. Without its sensory-somatic nervous system, an animal would be unable to process any information about its environment (what it sees, feels, hears, and so on) and could not control motor movements. Unlike the autonomic nervous system, which has two synapses between the CNS and the target organ, sensory and motor neurons have only one synapse—one ending of the neuron is at the organ and the other directly contacts a CNS neuron. Acetylcholine is the main neurotransmitter released at these synapses. 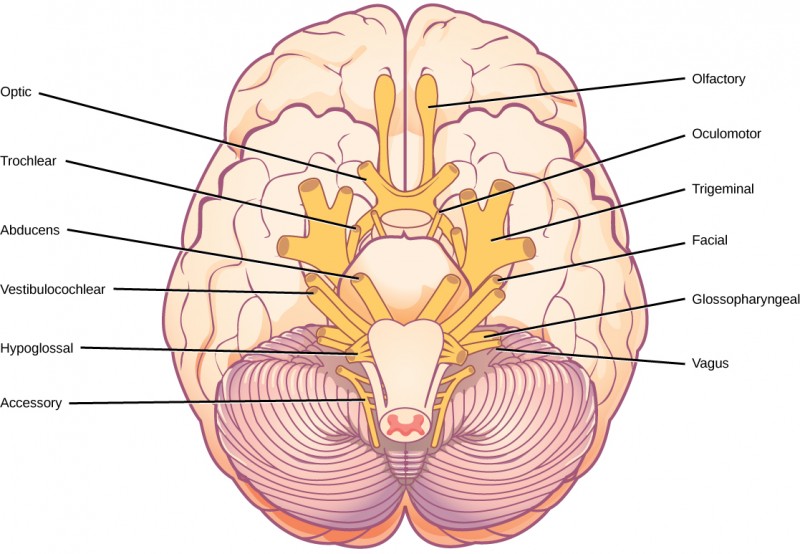 The human brain contains 12 cranial nerves that receive sensory input and control motor output for the head and neck.

Spinal nerves transmit sensory and motor information between the spinal cord and the rest of the body. Each of the 31 spinal nerves (in humans) contains both sensory and motor axons. The sensory neuron cell bodies are grouped in structures called dorsal root ganglia and are shown in the figure below. Each sensory neuron has one projection—with a sensory receptor ending in skin, muscle, or sensory organs—and another that synapses with a neuron in the dorsal spinal cord. Motor neurons have cell bodies in the ventral gray matter of the spinal cord that project to muscle through the ventral root. These neurons are usually stimulated by interneurons within the spinal cord but are sometimes directly stimulated by sensory neurons. 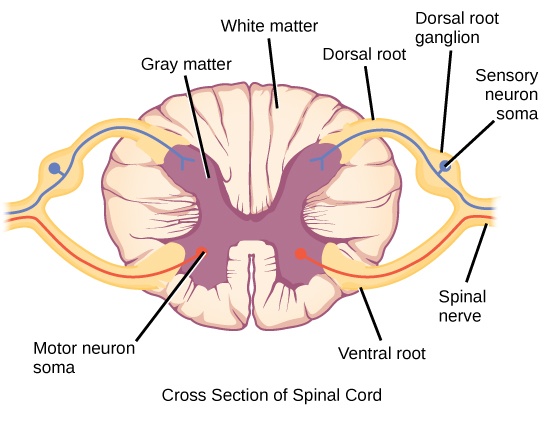 Spinal nerves contain both sensory and motor axons. The somas of sensory neurons are located in dorsal root ganglia. The somas of motor neurons are found in the ventral portion of the gray matter of the spinal cord.