Introduction to the Nervous System 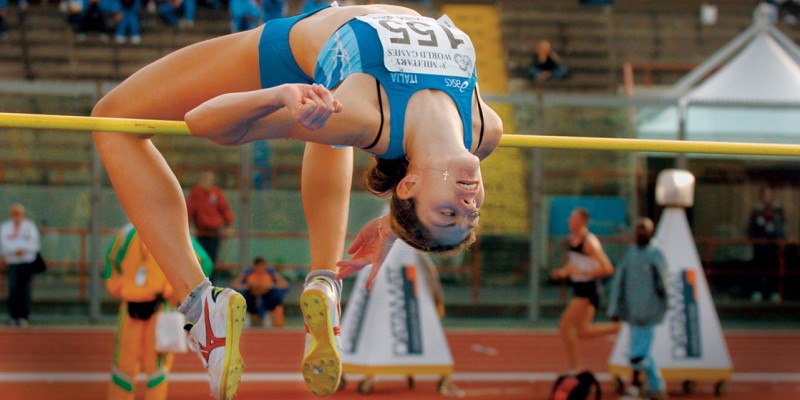 An athlete’s nervous system is hard at work during the planning and execution of a movement as precise as a high jump. Parts of the nervous system are involved in determining how hard to push off and when to turn, as well as controlling the muscles throughout the body that make this complicated movement possible without knocking the bar down—all in just a few seconds. (credit: modification of work by Shane T. McCoy, U.S. Navy)

When you’re reading this book, your nervous system is performing several functions simultaneously. The visual system is processing what is seen on the page; the motor system controls the turn of the pages (or click of the mouse); the prefrontal cortex maintains attention. Even fundamental functions, like breathing and regulation of body temperature, are controlled by the nervous system. A nervous system is an organism’s control center: it processes sensory information from outside (and inside) the body and controls all behaviors—from eating to sleeping to finding a mate.

Nervous systems throughout the animal kingdom vary in structure and complexity, as illustrated by the variety of animals shown in the figure below. Some organisms, like sea sponges, lack a true nervous system. Others, like jellyfish, lack a true brain and instead have a system of separate but connected nerve cells (neurons) called a “nerve net.” Echinoderms such as sea stars have nerve cells that are bundled into fibers called nerves.

Flatworms of the phylum Platyhelminthes have both a central nervous system (CNS), made up of a small “brain” and two nerve cords, and a peripheral nervous system (PNS) containing a system of nerves that extend throughout the body. The insect nervous system is more complex but also fairly decentralized. It contains a brain, ventral nerve cord, and ganglia (clusters of connected neurons). These ganglia can control movements and behaviors without input from the brain. Octopi may have the most complicated of invertebrate nervous systems—they have neurons that are organized in specialized lobes and eyes that are structurally similar to vertebrate species. 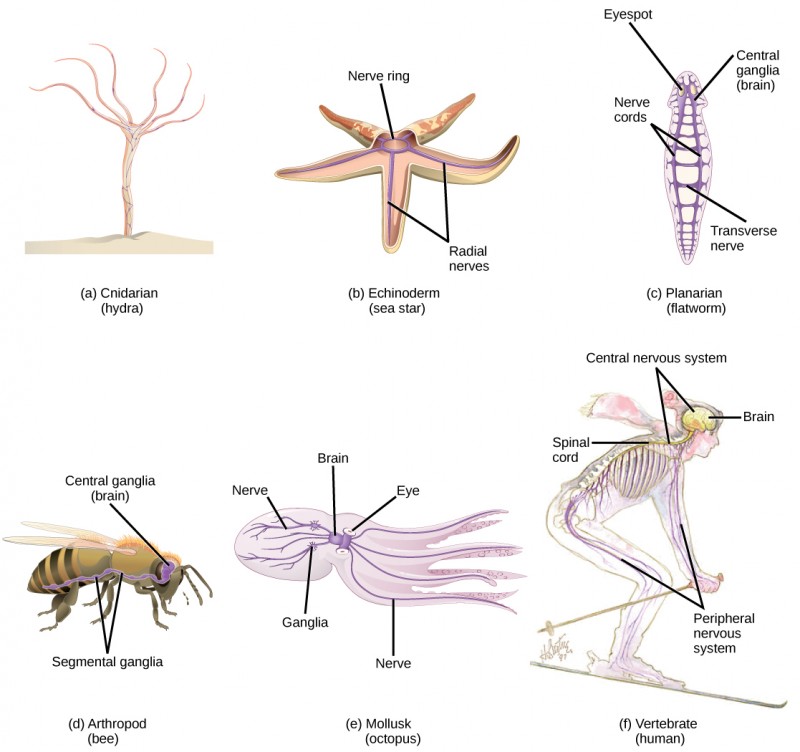 Nervous systems vary in structure and complexity. In (a) cnidarians, nerve cells form a decentralized nerve net. In (b) echinoderms, nerve cells are bundled into fibers called nerves. In animals exhibiting bilateral symmetry such as (c) planarians, neurons cluster into an anterior brain that processes information. In addition to a brain, (d) arthropods have clusters of nerve cell bodies, called peripheral ganglia, located along the ventral nerve cord. Mollusks such as squid and (e) octopi, which must hunt to survive, have complex brains containing millions of neurons. In (f) vertebrates, the brain and spinal cord comprise the central nervous system, while neurons extending into the rest of the body comprise the peripheral nervous system. (credit e: modification of work by Michael Vecchione, Clyde F.E. Roper, and Michael J. Sweeney, NOAA; credit f: modification of work by NIH)

You can watch this video of biologist Mark Kirschner discussing the “flipping” phenomenon of vertebrate evolution.

The nervous system is made up of neurons, specialized cells that can receive and transmit chemical or electrical signals, and glia, cells that provide support functions for the neurons by playing an information processing role that is complementary to neurons. A neuron can be compared to an electrical wire—it transmits a signal from one place to another. Glia can be compared to the workers at the electric company who make sure wires go to the right places, maintain the wires, and take down wires that are broken. Although glia have been compared to workers, recent evidence suggests that also usurp some of the signaling functions of neurons.

There is great diversity in the types of neurons and glia that are present in different parts of the nervous system. There are four major types of neurons, and they share several important cellular components.