A nervous system that functions correctly is a fantastically complex, well-oiled machine—synapses fire appropriately, muscles move when needed, memories are formed and stored, and emotions are well regulated. Unfortunately, each year millions of people in the United States deal with some sort of nervous system disorder. While scientists have discovered potential causes of many of these diseases, and viable treatments for some, ongoing research seeks to find ways to better prevent and treat all of these disorders.

Neurodegenerative disorders are illnesses characterized by a loss of nervous system functioning that are usually caused by neuronal death. These diseases generally worsen over time as more and more neurons die. The symptoms of a particular neurodegenerative disease are related to where in the nervous system the death of neurons occurs. Spinocerebellar ataxia, for example, leads to neuronal death in the cerebellum. The death of these neurons causes problems in balance and walking. Neurodegenerative disorders include Huntington’s disease, amyotrophic lateral sclerosis, Alzheimer’s disease and other types of dementia disorders, and Parkinson’s disease. Here, Alzheimer’s and Parkinson’s disease will be discussed in more depth.

Alzheimer’s disease is the most common cause of dementia in the elderly. In 2012, an estimated 5.4 million Americans suffered from Alzheimer’s disease, and payments for their care are estimated at $200 billion. Roughly one in every eight people age 65 or older has the disease. Due to the aging of the baby-boomer generation, there are projected to be as many as 13 million Alzheimer’s patients in the United States in the year 2050.

Symptoms of Alzheimer’s disease include disruptive memory loss, confusion about time or place, difficulty planning or executing tasks, poor judgment, and personality changes. Problems smelling certain scents can also be indicative of Alzheimer’s disease and may serve as an early warning sign. Many of these symptoms are also common in people who are aging normally, so it is the severity and longevity of the symptoms that determine whether a person is suffering from Alzheimer’s.

Alzheimer’s disease was named for Alois Alzheimer, a German psychiatrist who published a report in 1911 about a woman who showed severe dementia symptoms. Along with his colleagues, he examined the woman’s brain following her death and reported the presence of abnormal clumps, which are now called amyloid plaques, along with tangled brain fibers called neurofibrillary tangles. Amyloid plaques, neurofibrillary tangles, and an overall shrinking of brain volume are commonly seen in the brains of Alzheimer’s patients. Loss of neurons in the hippocampus is especially severe in advanced Alzheimer’s patients. The figure below compares a normal brain to the brain of an Alzheimer’s patient. Many research groups are examining the causes of these hallmarks of the disease.

One form of the disease is usually caused by mutations in one of three known genes. This rare form of early onset Alzheimer’s disease affects fewer than five percent of patients with the disease and causes dementia beginning between the ages of 30 and 60. The more prevalent, late-onset form of the disease likely also has a genetic component. One particular gene, apolipoprotein E (APOE) has a variant (E4) that increases a carrier’s likelihood of getting the disease. Many other genes have been identified that might be involved in the pathology.

Other clinical interventions focus on behavioral therapies like psychotherapy, sensory therapy, and cognitive exercises. Since Alzheimer’s disease appears to hijack the normal aging process, research into prevention is prevalent. Smoking, obesity, and cardiovascular problems may be risk factors for the disease, so treatments for those may also help to prevent Alzheimer’s disease. Some studies have shown that people who remain intellectually active by playing games, reading, playing musical instruments, and being socially active in later life have a reduced risk of developing the disease.

Compared to a normal brain (left), the brain from a patient with Alzheimer’s disease (right) shows a dramatic neurodegeneration, particularly within the ventricles and hippocampus. (credit: modification of work by “Garrando”/Wikimedia Commons based on original images by ADEAR: “Alzheimer’s Disease Education and Referral Center, a service of the National Institute on Aging”)

Like Alzheimer’s disease, Parkinson’s disease is a neurodegenerative disease. It was first characterized by James Parkinson in 1817. Each year, 50,000-60,000 people in the United States are diagnosed with the disease. Parkinson’s disease causes the loss of dopamine neurons in the substantia nigra, a midbrain structure that regulates movement. Loss of these neurons causes many symptoms including tremor (shaking of fingers or a limb), slowed movement, speech changes, balance and posture problems, and rigid muscles. The combination of these symptoms often causes a characteristic slow hunched shuffling walk, illustrated in the figure below. Patients with Parkinson’s disease can also exhibit psychological symptoms, such as dementia or emotional problems.

Although some patients have a form of the disease known to be caused by a single mutation, for most patients the exact causes of Parkinson’s disease remain unknown: the disease likely results from a combination of genetic and environmental factors (similar to Alzheimer’s disease). Post-mortem analysis of brains from Parkinson’s patients shows the presence of Lewy bodies—abnormal protein clumps—in dopaminergic neurons. The prevalence of these Lewy bodies often correlates with the severity of the disease.

There is no cure for Parkinson’s disease, and treatment is focused on easing symptoms. One of the most commonly prescribed drugs for Parkinson’s is L-DOPA, which is a chemical that is converted into dopamine by neurons in the brain. This conversion increases the overall level of dopamine neurotransmission and can help compensate for the loss of dopaminergic neurons in the substantia nigra. Other drugs work by inhibiting the enzyme that breaks down dopamine. 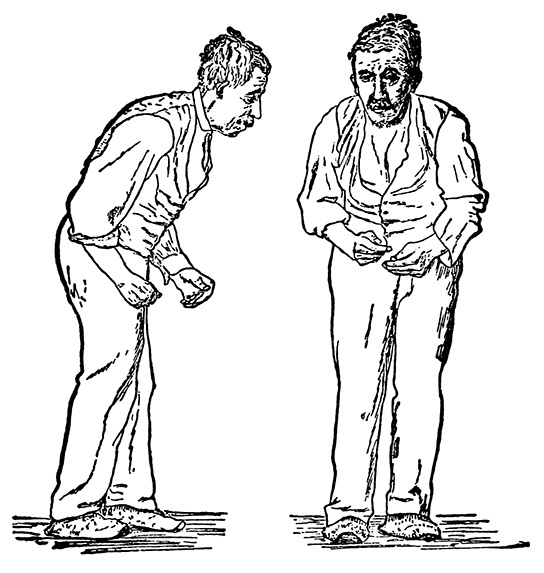