The outermost part of the brain is a thick piece of nervous system tissue called the cerebral cortex, which is folded into hills called gyri (singular: gyrus) and valleys called sulci (singular: sulcus). The cortex is made up of two hemispheres—right and left—which are separated by a large sulcus. A thick fiber bundle called the corpus callosum (Latin: “tough body”) connects the two hemispheres and allows information to be passed from one side to the other. Although there are some brain functions that are localized more to one hemisphere than the other, the functions of the two hemispheres are largely redundant. In fact, sometimes (very rarely) an entire hemisphere is removed to treat severe epilepsy. While patients do suffer some deficits following the surgery, they can have surprisingly few problems, especially when the surgery is performed on children who have very immature nervous systems. 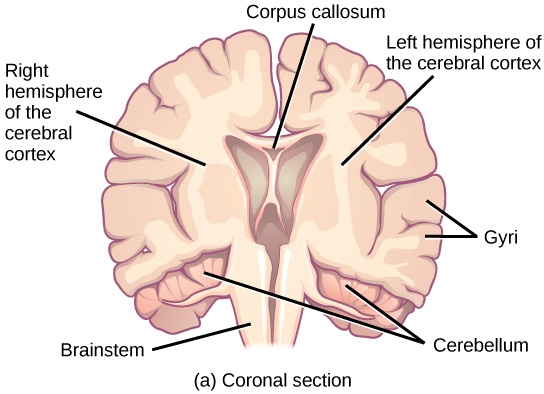 This illustration shows the coronal section of the human brain. 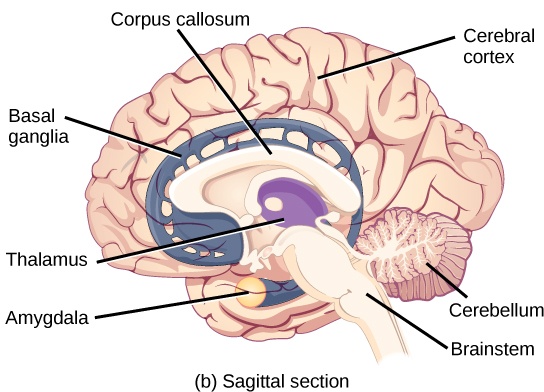 This illustration shows the sagittal section of the human brain.

In other surgeries to treat severe epilepsy, the corpus callosum is cut instead of removing an entire hemisphere. This causes a condition called split-brain, which gives insights into unique functions of the two hemispheres. For example, when an object is presented to patients’ left visual field, they may be unable to verbally name the object (and may claim to not have seen an object at all). This is because the visual input from the left visual field crosses and enters the right hemisphere and cannot then signal to the speech center, which generally is found in the left side of the brain. Remarkably, if a split-brain patient is asked to pick up a specific object out of a group of objects with the left hand, the patient will be able to do so but will still be unable to vocally identify it.

Each cortical hemisphere contains regions called lobes that are involved in different functions. Scientists use various techniques to determine what brain areas are involved in different functions: they examine patients who have had injuries or diseases that affect specific areas and see how those areas are related to functional deficits. They also conduct animal studies where they stimulate brain areas and see if there are any behavioral changes. They use a technique called transmagnetic stimulation (TMS) to temporarily deactivate specific parts of the cortex using strong magnets placed outside the head; and they use functional magnetic resonance imaging (fMRI) to look at changes in oxygenated blood flow in particular brain regions that correlate with specific behavioral tasks.

These techniques, and others, have given great insight into the functions of different brain regions but have also showed that any given brain area can be involved in more than one behavior or process, and any given behavior or process generally involves neurons in multiple brain areas. That being said, each hemisphere of the mammalian cerebral cortex can be broken down into four functionally and spatially defined lobes: frontal, parietal, temporal, and occipital. The figure below illustrates these four lobes of the human cerebral cortex. 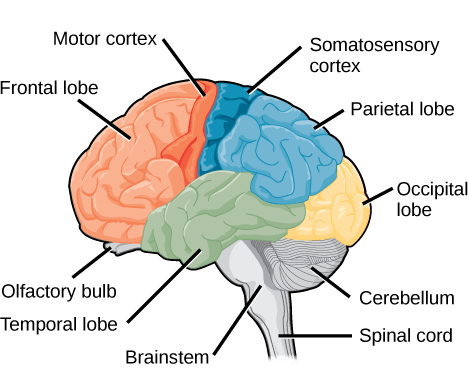 The frontal lobe is located at the front of the brain, over the eyes. This lobe contains the olfactory bulb, which processes smells. The frontal lobe also contains the motor cortex, which is important for planning and implementing movement. Areas within the motor cortex map to different muscle groups, and there is some organization to this map, as shown in the figure below. For example, the neurons that control movement of the fingers are next to the neurons that control movement of the hand. Neurons in the frontal lobe also control cognitive functions like maintaining attention, speech, and decision-making. Studies of humans who have damaged their frontal lobes show that parts of this area are involved in personality, socialization, and assessing risk. 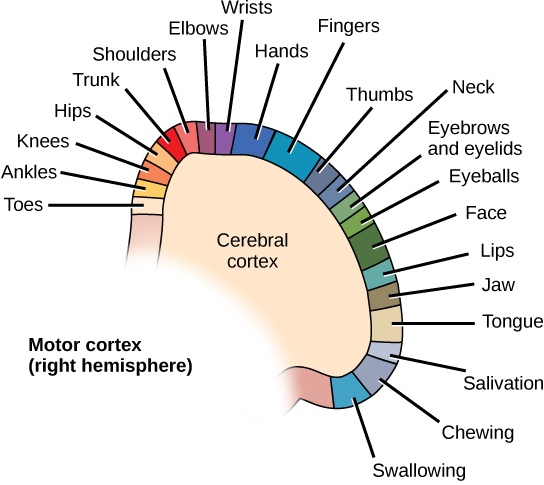 The occipitallobe is located at the back of the brain. It is primarily involved in vision—seeing, recognizing, and identifying the visual world.

The temporallobe is located at the base of the brain by your ears and is primarily involved in processing and interpreting sounds. It also contains the hippocampus (Greek for “seahorse”)—a structure that processes memory formation. The hippocampus is illustrated in the figure below. The role of the hippocampus in memory was partially determined by studying one famous epileptic patient, HM, who had both sides of his hippocampus removed in an attempt to cure his epilepsy. His seizures went away, but he could no longer form new memories (although he could remember some facts from before his surgery and could learn new motor tasks).

Compared to other vertebrates, mammals have exceptionally large brains for their body size. An entire alligator’s brain, for example, would fill about one and a half teaspoons. This increase in brain to body size ratio is especially pronounced in apes, whales, and dolphins. While this increase in overall brain size doubtlessly played a role in the evolution of complex behaviors unique to mammals, it does not tell the whole story. Scientists have found a relationship between the relatively high surface area of the cortex and the intelligence and complex social behaviors exhibited by some mammals. This increased surface area is due, in part, to increased folding of the cortical sheet (more sulci and gyri). For example, a rat cortex is very smooth with very few sulci and gyri. Cat and sheep cortices have more sulci and gyri. Chimps, humans, and dolphins have even more.

Mammals have larger brain-to-body ratios than other vertebrates. Within mammals, increased cortical folding and surface area is correlated with complex behavior.

Interconnected brain areas called the basal ganglia (or basal nuclei), shown in figure (b) above, play important roles in movement control and posture. Damage to the basal ganglia, as in Parkinson’s disease, leads to motor impairments like a shuffling gait when walking. The basal ganglia also regulate motivation. For example, when a wasp sting led to bilateral basal ganglia damage in a 25-year-old businessman, he began to spend all his days in bed and showed no interest in anything or anybody. But when he was externally stimulated—as when someone asked to play a card game with him—he was able to function normally. Interestingly, he and other similar patients do not report feeling bored or frustrated by their state.

The thalamus (Greek for “inner chamber”), illustrated in the figure below, acts as a gateway to and from the cortex. It receives sensory and motor inputs from the body and also receives feedback from the cortex. This feedback mechanism can modulate conscious awareness of sensory and motor inputs depending on the attention and arousal state of the animal. The thalamus helps regulate consciousness, arousal, and sleep states. A rare genetic disorder called fatal familial insomnia causes the degeneration of thalamic neurons and glia. This disorder prevents affected patients from being able to sleep, among other symptoms, and is eventually fatal. 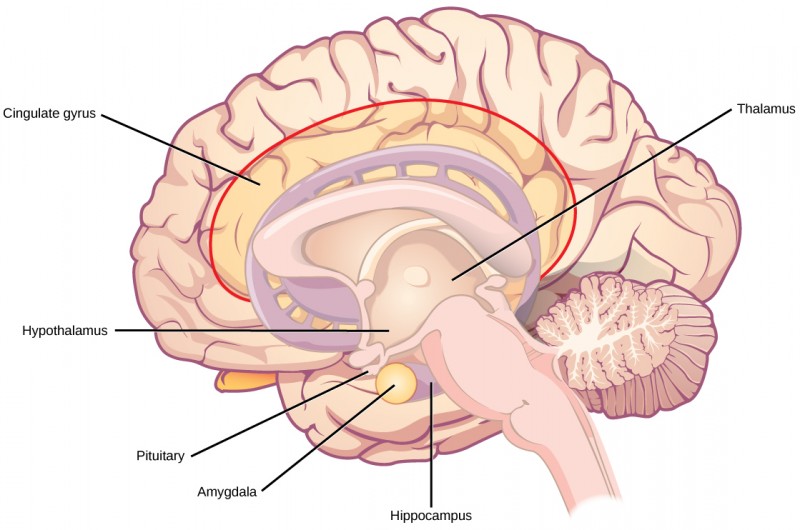 The limbic system regulates emotion and other behaviors. It includes parts of the cerebral cortex located near the center of the brain, including the cingulate gyrus and the hippocampus as well as the thalamus, hypothalamus and amygdala.

Below the thalamus is the hypothalamus, shown in the figure above. The hypothalamus controls the endocrine system by sending signals to the pituitary gland, a pea-sized endocrine gland that releases several different hormones that affect other glands as well as other cells. This relationship means that the hypothalamus regulates important behaviors that are controlled by these hormones. The hypothalamus is the body’s thermostat—it makes sure key functions like food and water intake, energy expenditure, and body temperature are kept at appropriate levels. Neurons within the hypothalamus also regulate circadian rhythms, sometimes called sleep cycles.

The limbic system is a connected set of structures that regulates emotion, as well as behaviors related to fear and motivation. It plays a role in memory formation and includes parts of the thalamus and hypothalamus as well as the hippocampus. One important structure within the limbic system is a temporal lobe structure called the amygdala (Greek for “almond”), illustrated in this figure above. The two amygdala are important both for the sensation of fear and for recognizing fearful faces. The cingulate gyrus helps regulate emotions and pain.

The cerebellum (Latin for “little brain”), shown in this figure above, sits at the base of the brain on top of the brainstem. The cerebellum controls balance and aids in coordinating movement and learning new motor tasks.

The brainstem, illustrated in this figure above, connects the rest of the brain with the spinal cord. It consists of the midbrain, medulla oblongata, and the pons. Motor and sensory neurons extend through the brainstem allowing for the relay of signals between the brain and spinal cord. Ascending neural pathways cross in this section of the brain allowing the left hemisphere of the cerebrum to control the right side of the body and vice versa. The brainstem coordinates motor control signals sent from the brain to the body. The brainstem controls several important functions of the body including alertness, arousal, breathing, blood pressure, digestion, heart rate, swallowing, walking, and sensory and motor information integration.