Nnamdi Azikiwe, PC, (16 November 1904 – 11 May 1996), usually referred to as “Zik”, was a Nigerian statesman who was Governor General of Nigeria from 1960 to 1963 and the first President of Nigeria from 1963 to 1966 (when Nigeria became a republic). Considered a driving force behind the nation’s independence, he came to be known as the “father of Nigerian Nationalism”.

Born to Igbo parents in Zungeru in present-day Niger State, as a young boy he learned to speak Hausa (the main indigenous language of the Northern Region). Azikiwe was later sent to live with his aunt and grandmother in Onitsha (his parental homeland), where he learned the Igbo language. A stay in Lagos exposed him to the Yoruba language; by the time he was in college, he had been exposed to different Nigerian cultures and spoke three languages (an asset as president).

Azikiwe traveled to the United States and attended Storer College, Columbia University, the University of Pennsylvania and Howard University before returning to Africa in 1934, where he began work as a journalist in the Gold Coast. In British West Africa, he advocated Nigerian and African nationalism as a journalist and a political leader. 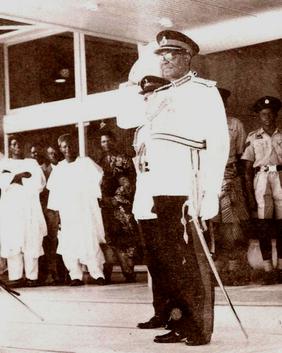 Azikiwe became active in the Nigerian Youth Movement (NYM), the country’s first nationalist organization. Although he supported Samuel Akinsanya as the NYM candidate for a vacant seat in the Legislative Council in 1941, the NYM executive council selected Ernest Ikoli. Azikiwe resigned from the NYM, accusing the majority Yoruba leadership of discriminating against the Ijebu-Yoruba members and Ibos. Some Ijebu members followed him, splitting the movement along ethnic lines.

He entered politics, co-founding the National Council of Nigeria and the Cameroons (NCNC) with Herbert Macaulay in 1944. Azikiwe became the council’s secretary-general in 1946.

His basis for the allegation was a wireless message intercepted by a Pilot reporter. After receiving the intercepted message, Azikiwe went into hiding in Onitsha. The Pilot published sympathetic editorials during his absence, and many Nigerians believed the assassination story. Azikiwe’s popularity, and his newspaper circulation, increased during this period. The allegations were doubted by some Nigerians, who believed that he made them up to raise his profile. The skeptics were primarily Yoruba politicians from the Nigerian Youth Movement, creating a rift between the factions and a press war between Azikiwe’s Pilot and the NYM’s Daily Service.

A militant youth movement, led by Osita Agwuna, Raji Abdalla, Kolawole Balogun, M. C. K. Ajuluchukwu and Abiodun Aloba, was established in 1946 to defend Azikiwe’s life and his ideals of self-government. Inspired by his writings and Nwafor Orizu’s Zikism philosophy, members of the movement soon began advocating positive, militant action to bring about self-government. Calls for action included strikes, study of military science by Nigerian students overseas, and a boycott of foreign products. Azikiwe did not publicly defend the movement, which was banned in 1951 after a failed attempt to kill a colonial secretary.

In 1945, British governor Arthur Richards presented proposals for a revision of the Clifford constitution of 1922. Included in the proposal was an increase in the number of nominated African members to the Legislative Council. However, the changes were opposed by nationalists such as Azikiwe. NCNC politicians opposed unilateral decisions made by Arthur Richards and a constitutional provision allowing only four elected African members; the rest would be nominated candidates.

The nominated African candidates were loyal to the colonial government, and would not aggressively seek self-government. Another basis of opposition was little input for the advancement of Africans to senior civil-service positions. The NCNC prepared to argue its case to the new Labour government of Clement Attlee in Britain. A tour of the country was begun to raise awareness of the party’s concerns and to raise money for the UK protest.

NCNC president Herbert Macaulay died during the tour, and Azikiwe assumed leadership of the party. He led the delegation to London and, in preparation for the trip, traveled to the US to seek sympathy for the party’s case. Azikiwe met Eleanor Roosevelt at Hyde Park, and spoke about the “emancipation of Nigeria from political thralldom, economic insecurity and social disabilities”. The UK delegation included Azikiwe, Funmilayo Ransome-Kuti, Zanna Dipcharima, Abubakar Olorunimbe, Adeleke Adedoyin and Nyong Essien.

They visited the Fabian Society’s Colonial Bureau, the Labor Imperial Committee and the West African Students’ Union to raise awareness of its proposals for amendments to the 1922 constitution. Included in the NCNC proposals was consultation with Africans about changes to the Nigerian constitution, more power to the regional House of Assemblies and limiting the powers of the central Legislative Council to defense, currency and foreign affairs. The delegation submitted its proposals to the colonial secretary, but little was done to change to Richards’ proposals. The Richards constitution took effect in 1947, and Azikiwe contested one of the Lagos seats to delay its implementation.

Azikiwe opposed the changes, and contested for the chance to change the new constitution. Staggered elections were held from August to December 1951. In the Western Region (where Azikiwe stood), two parties were dominant: Azikiwe’s NCNC and the Action Group. Elections for the Western Regional Assembly were held in September and December 1951 because the constitution allowed an electoral college to choose members of the national legislature; an Action Group majority in the house might prevent Azikiwe from going to the House of Representatives.

He won a regional assembly seat from Lagos, but the opposition party claimed a majority in the House of Assembly and Azikiwe did not represent Lagos in the federal House of Representatives. In 1951, he became leader of the Opposition to the government of Obafemi Awolowo in the Western Region’s House of Assembly. Azikiwe’s non-selection to the national assembly caused chaos in the west. An agreement by elected NCNC members from Lagos to step down for Azikiwe if he was not nominated broke down. Azikiwe blamed the constitution, and wanted changes made. The NCNC (which dominated the Eastern Region) agreed, and committed to amending the constitution.

Azikiwe moved to the Eastern Region in 1952, and the NCNC-dominated regional assembly made proposals to accommodate him. Although the party’s regional and central ministers were asked to resign in a cabinet reshuffle, most ignored the request. The regional assembly then passed a vote of no confidence on the ministers, and appropriation bills sent to the ministry were rejected. This created an impasse in the region, and the lieutenant governor dissolved the regional house. A new election returned Azikiwe as a member of the Eastern Assembly. He was selected as Chief Minister, and became premier of Nigeria’s Eastern Region in 1954 when it became a federating unit.

Azikiwe became governor-general on 16 November 1960, with Abubakar Tafawa Balewa as prime minister, and became the first Nigerian named to the Privy Council of the United Kingdom. When Nigeria became a republic in 1963, he was its first president. In both posts, Azikiwe’s role was largely ceremonial.

He and his civilian colleagues were removed from office in the 15 January 1966 military coup, and he was the most prominent politician to avoid assassination after the coup. Azikiwe was a spokesman for Biafra and advised its leader, Chukwuemeka Odumegwu Ojukwu, during the Biafran War (1967–1970). He switched his allegiance back to Nigeria during the war, and appealed to Ojukwu to end the war in pamphlets and interviews. The New York Times said about his politics, “Throughout his life, Dr. Azikiwe’s alliance with northerners put him at odds with Obafemi Awolowo, a socialist-inclined leader of the Yoruba, the country’s other important southern group.”

After the war, he was chancellor of the University of Lagos from 1972 to 1976. Azikiwe joined the Nigerian People’s Party in 1978, making unsuccessful bids for the presidency in 1979 and 1983. He left politics involuntarily after the 31 December 1983 military coup. Azikiwe died on 11 May 1996 at the University of Nigeria Teaching Hospital in Enugu after a long illness, and is buried in his native Onitsha.