Olayinka Herbert Samuel Heelas Badmus Macaulay (14 November 1864 – 7 May 1946) was a Nigerian nationalist, politician, engineer, architect, journalist, and musician and is considered by many Nigerians as the founder of Nigerian nationalism. 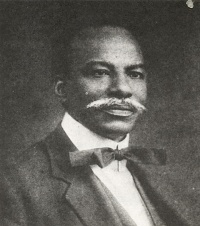 Prior to the beginning of the twentieth century, Macaulay associated with many Lagos socialites, worked as a private surveyor and had a moderate outlook about colonialism. However, by the end of the 1900s, he had begun to veer from his professional and social activities to become a political activist. He joined the Anti-Slavery and Aborigines’ Protection Society.

Macaulay was an unlikely champion of the masses. A grandson of Ajayi Crowther, the first African bishop of the Niger Territory, he was born into a Lagos that was divided politically into groups arranged in a convenient pecking order – the British rulers who lived in the posh Marina district, the Saros and other slave descendants who lived to the west, and the Brazilians who lived behind the whites in the Portuguese Town. Behind all three lived the real Lagosians, the masses of indigenous Yoruba people, disliked and generally ignored by their privileged neighbours. It was not until Macaulay’s generation that the Saros and Brazilians even began to contemplate making common cause with the masses.

In 1908 he exposed European corruption in the handling of railway finances and in 1919 he argued successfully for the chiefs whose land had been taken by the British in front of the Privy Council in London. As a result, the colonial government was forced to pay compensation to the chiefs.

In 1909, he came out publicly against the prohibition of spirits into Nigeria which he felt will ultimately lead to reduced government revenues and thereafter increased taxation. Macaulay also found himself in opposition to the colonial government in three major issues that were prominent in Lagos life during 1900-1930. The issues included the proposed water rate, selection of the Oba of Lagos and the Imamate of the Lagos Central Mosque.

Macaulay opposed colonial taxation to fund water supply in Lagos on the grounds of taxation without representation. He was a major supporter of the House of Docemo in Lagos. Largely because Lagos was not under indirect rule, the Oba of Lagos unlike many of its counterparts in other areas of the country was stripped of many of his traditional authorities. Macaulay supported the House of Docemo in its opposition to the water rate and colonial acquisition of Lagos lands. He also galvanized the Ilu Committee composed of the Oba of Lagos and traditional chiefs in Lagos to oppose some of the colonial policies.

Macaulay’s profile in Lagos was enhanced by the Oluwa Land case. Amodu Tijani Oluwa, a traditional chief, had challenged the compulsory acquisition without compensation of his family land in Apapa. He lost his appeal at the Supreme Court and took the case to the Privy Court Council in London. Macaulay was Oluwa’s private secretary in the trip to London. Oluwa’s case was supported by the Ilu Committee and the Oba who were interested in the protection of their family lands in Lagos.

In London, Macaulay presented himself as Oluwa’s private secretary and as a representative of the Oba and in the capacity he made statements which the colonial authorities felt were inimical to their interest. In 1920, the Eleko, Eshungbayi was ostracized by the British because he refused to disavow allegations against the colonial authorities made by Macaulay in London.

To further his political activities, Macaulay co-founded the Nigerian Daily News, a platform he used to write opinion pieces such as Justitia Fiat: The Moral Obligation of the British Government to the House of Docemo. He also wrote a piece titled Henry Carr Must Go. From 1923 to 1938, he became a prominent figure in many important political issues in Lagos including the elections into the quinquennial elections into the Legislative Council, triennial elections to the Lagos Town Council, and the headship of the House of Docemo.

In his political activities, he relied on the Lagos Daily News, the Lagos Market Women Association led by his ally, Alimotu Pelewura, the House of Docemo and many uneducated Lagosians. His political opinions divided many Lagos elites as he used the Daily News to publicly vilify his opponents and former friends such as Henry Carr, Macaulay became very popular and on 24 June 1923 he founded the Nigerian National Democratic Party (NNDP), the first Nigerian political party. The party won all the seats in the elections of 1923, 1928 and 1933.

Though, the party’s major function was to put candidates into the legislative council, it had a broader objective of promoting democracy in Nigeria, increasing higher Nigerian participation in the social, economic and educational development of Nigeria. Though, the party wanted to be national in outlook, Macaulay’s strength of support was from the House of Docemo and therefore his preoccupation with the defense of the House of Docemo and his desire to control the party limited the growth of the party.