The axial skeleton forms the central axis of the body and includes the bones of the skull, ossicles of the middle ear, hyoid bone of the throat, vertebral column, and the thoracic cage (ribcage) (see the figure below). The function of the axial skeleton is to provide support and protection for the brain, the spinal cord, and the organs in the ventral body cavity. It provides a surface for the attachment of muscles that move the head, neck, and trunk, performs respiratory movements, and stabilizes parts of the appendicular skeleton. 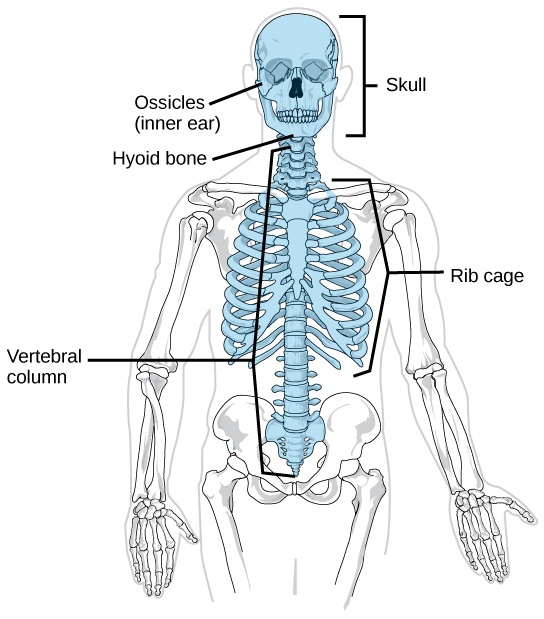 The axial skeleton consists of the bones of the skull, ossicles of the middle ear, hyoid bone, vertebral column, and rib cage. (credit: modification of work by Mariana Ruiz Villareal)

The bones of the skull support the structures of the face and protect the brain. The skull consists of 22 bones, which are divided into two categories: cranial bones and facial bones. The cranial bones are eight bones that form the cranial cavity, which encloses the brain and serves as an attachment site for the muscles of the head and neck. The eight cranial bones are the frontal bone, two parietal bones, two temporal bones, occipital bone, sphenoid bone, and the ethmoid bone. Although the bones developed separately in the embryo and fetus, in the adult, they are tightly fused with connective tissue and adjoining bones do not move (see the figure below). 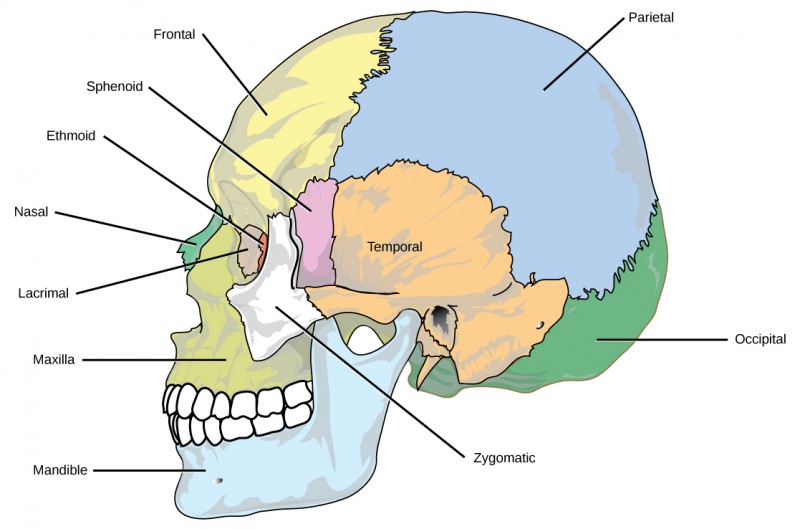 The bones of the skull support the structures of the face and protect the brain. (credit: modification of work by Mariana Ruiz Villareal)

Fourteen facial bones form the face, provide cavities for the sense organs (eyes, mouth, and nose), protect the entrances to the digestive and respiratory tracts, and serve as attachment points for facial muscles. The 14 facial bones are the nasal bones, the maxillary bones, zygomatic bones, palatine, vomer, lacrimal bones, the inferior nasal conchae, and the mandible. All of these bones occur in pairs except for the mandible and the vomer (see the figure below). 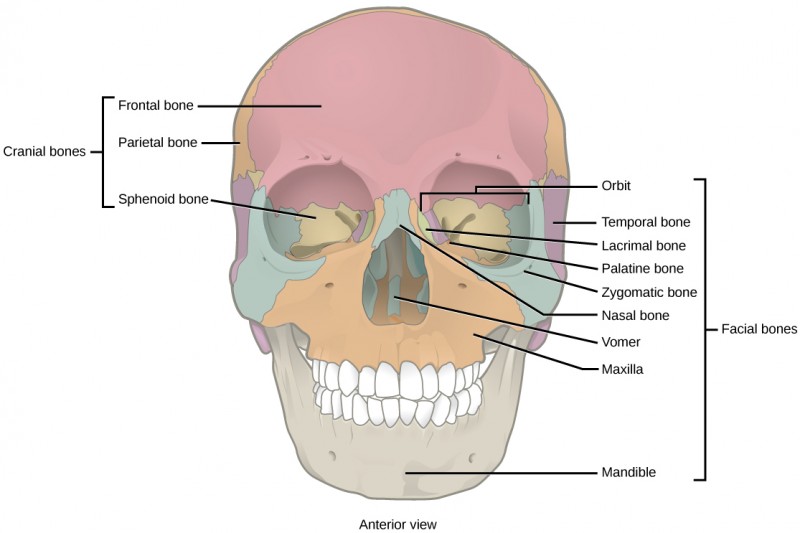 The cranial bones, including the frontal, parietal, and sphenoid bones, cover the top of the head. The facial bones of the skull form the face and provide cavities for the eyes, nose, and mouth.

Although it is not found in the skull, the hyoid bone is considered a component of the axial skeleton. The hyoid bone lies below the mandible in the front of the neck. It acts as a movable base for the tongue and is connected to muscles of the jaw, larynx, and tongue. The mandible articulates with the base of the skull. The mandible controls the opening to the airway and gut. In animals with teeth, the mandible brings the surfaces of the teeth in contact with the maxillary teeth.

The vertebral column, or spinal column, surrounds and protects the spinal cord, supports the head, and acts as an attachment point for the ribs and muscles of the back and neck. The adult vertebral column comprises 26 bones: the 24 vertebrae, the sacrum, and the coccyx bones. In the adult, the sacrum is typically composed of five vertebrae that fuse into one. The coccyx is typically 3–4 vertebrae that fuse into one. Around the age of 70, the sacrum and the coccyx may fuse together. We begin life with approximately 33 vertebrae, but as we grow, several vertebrae fuse together. The adult vertebrae are further divided into the 7 cervical vertebrae, 12 thoracic vertebrae, and 5 lumbar vertebrae (see the figure below). 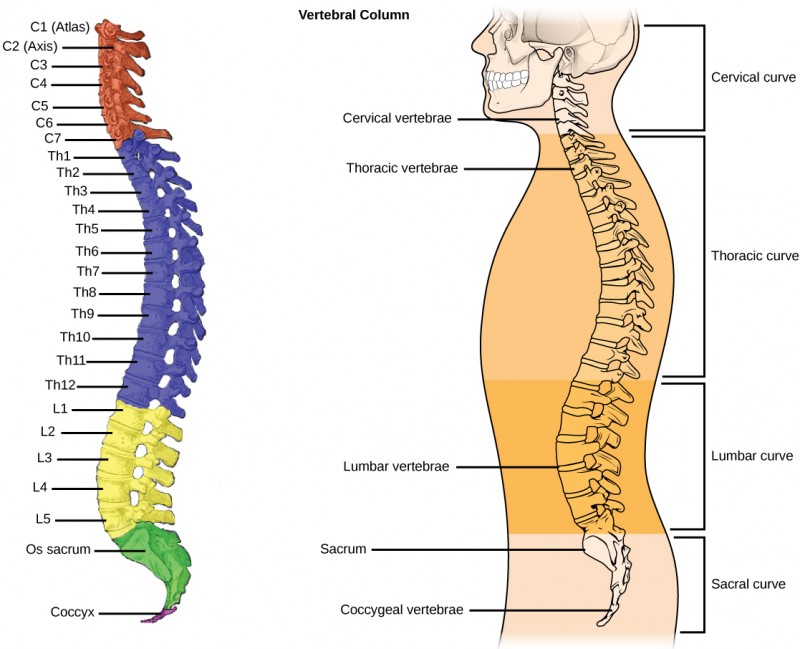 Each vertebral body has a large hole in the center through which the nerves of the spinal cord pass. There is also a notch on each side through which the spinal nerves, which serve the body at that level, can exit from the spinal cord. The vertebral column is approximately 71 cm (28 inches) in adult male humans and is curved, which can be seen from a side view. The names of the spinal curves correspond to the region of the spine in which they occur. The thoracic and sacral curves are concave (curve inwards relative to the front of the body) and the cervical and lumbar curves are convex (curve outwards relative to the front of the body). The arched curvature of the vertebral column increases its strength and flexibility, allowing it to absorb shocks like a spring (see the figure above).

Intervertebral discs composed of fibrous cartilage lie between adjacent vertebral bodies from the second cervical vertebra to the sacrum. Each disc is part of a joint that allows for some movement of the spine and acts as a cushion to absorb shocks from movements such as walking and running. Intervertebral discs also act as ligaments to bind vertebrae together. The inner part of discs, the nucleus pulposus, hardens as people age and becomes less elastic. This loss of elasticity diminishes its ability to absorb shocks.

The thoracic cage, also known as the ribcage, is the skeleton of the chest, and consists of the ribs, sternum, thoracic vertebrae, and costal cartilages (see the figure below). The thoracic cage encloses and protects the organs of the thoracic cavity, including the heart and lungs. It also provides support for the shoulder girdles and upper limbs, and serves as the attachment point for the diaphragm, muscles of the back, chest, neck, and shoulders. Changes in the volume of the thorax enable breathing.

The sternum, or breastbone, is a long, flat bone located at the anterior of the chest. It is formed from three bones that fuse in the adult. The ribs are 12 pairs of long, curved bones that attach to the thoracic vertebrae and curve toward the front of the body, forming the ribcage. Costal cartilages connect the anterior ends of the ribs to the sternum, with the exception of rib pairs 11 and 12, which are free-floating ribs. 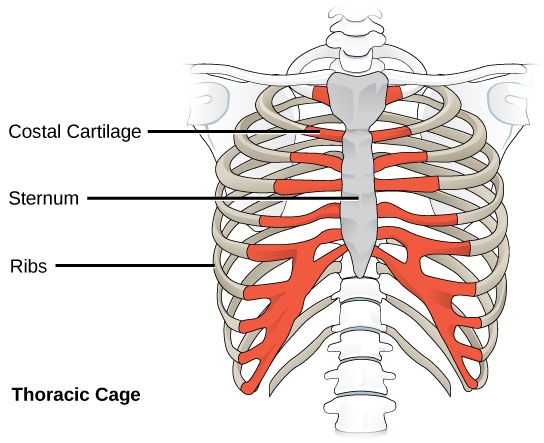 The thoracic cage, or rib cage, protects the heart and the lungs. (credit: modification of work by NCI, NIH)

This is a lesson from the tutorial, The Musculoskeletal System and you are encouraged to log in or register, so that you can track your progress.