The allotropy of sulfur is far greater and more complex than that of any other element. Sulfur is the brimstone referred to in the Bible and other places, and references to sulfur occur throughout recorded history—right up to the relatively recent discovery that it is a component of the atmospheres of Venus and of Io, a moon of Jupiter.

The most common and most stable allotrope of sulfur is yellow, rhombic sulfur, so named because of the shape of its crystals. Rhombic sulfur is the form to which all other allotropes revert at room temperature. Crystals of rhombic sulfur melt at 113 °C. Cooling this liquid gives long needles of monoclinic sulfur. This form is stable from 96 °C to the melting point, 119 °C. At room temperature, it gradually reverts to the rhombic form.

Both rhombic sulfur and monoclinic sulfur contain S8 molecules in which atoms form eight-membered, puckered rings that resemble crowns, as illustrated in the figure below. Each sulfur atom is bonded to each of its two neighbors in the ring by covalent S-S single bonds. 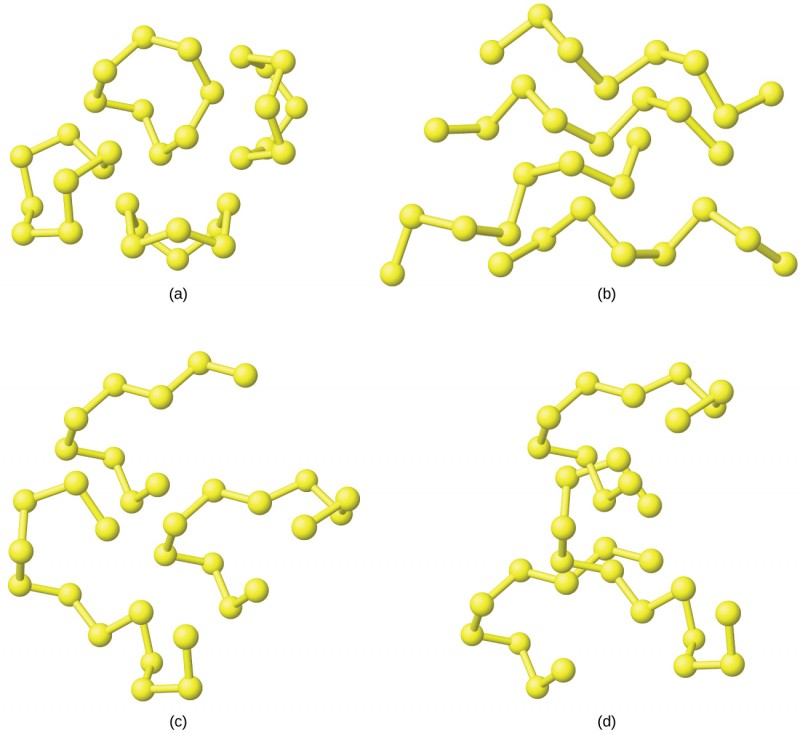 These four sulfur allotropes show eight-membered, puckered rings. Each sulfur atom bonds to each of its two neighbors in the ring by covalent S-S single bonds. Here are (a) individual S8 rings, (b) S8 chains formed when the rings open, (c) longer chains formed by adding sulfur atoms to S8 chains, and (d) part of the very long sulfur chains formed at higher temperatures.

When rhombic sulfur melts, the straw-colored liquid is quite mobile; its viscosity is low because S8 molecules are essentially spherical and offer relatively little resistance as they move past each other. As the temperature rises, S-S bonds in the rings break, and polymeric chains of sulfur atoms result. These chains combine end to end, forming still longer chains that tangle with one another. The liquid gradually darkens in color and becomes so viscous that finally (at about 230 °C) it does not pour easily.

The dangling atoms at the ends of the chains of sulfur atoms are responsible for the dark red color because their electronic structure differs from those of sulfur atoms that have bonds to two adjacent sulfur atoms. This causes them to absorb light differently and results in a different visible color. Cooling the liquid rapidly produces a rubberlike amorphous mass, called plastic sulfur.

Sulfur boils at 445 °C and forms a vapor consisting of S2, S6, and S8 molecules; at about 1000 °C, the vapor density corresponds to the formula S2, which is a paramagnetic molecule like O2 with a similar electronic structure and a weak sulfur-sulfur double bond.

As seen in this discussion, an important feature of the structural behavior of the nonmetals is that the elements usually occur with eight electrons in their valence shells. If necessary, the elements form enough covalent bonds to supplement the electrons already present to possess an octet.

For example, members of group 15 have five valence electrons and require only three additional electrons to fill their valence shells. These elements form three covalent bonds in their free state: triple bonds in the N2 molecule or single bonds to three different atoms in arsenic and phosphorus. The elements of group 16 require only two additional electrons.

Oxygen forms a double bond in the O2 molecule, and sulfur, selenium, and tellurium form two single bonds in various rings and chains. The halogens form diatomic molecules in which each atom is involved in only one bond. This provides the electron required necessary to complete the octet on the halogen atom. The noble gases do not form covalent bonds to other noble gas atoms because they already have a filled outer shell.