Chemistry » Metals, Metalloids, and Nonmetals » Structure and General Properties of the Metalloids

Structures of the Metalloids

Structures of the Metalloids

Covalent bonding is the key to the crystal structures of the metalloids. In this regard, these elements resemble nonmetals in their behavior.

Elemental silicon, germanium, arsenic, antimony, and tellurium are lustrous, metallic-looking solids. Silicon and germanium crystallize with a diamond structure. Each atom within the crystal has covalent bonds to four neighboring atoms at the corners of a regular tetrahedron. Single crystals of silicon and germanium are giant, three-dimensional molecules.

There are several allotropes of arsenic with the most stable being layer like and containing puckered sheets of arsenic atoms. Each arsenic atom forms covalent bonds to three other atoms within the sheet. The crystal structure of antimony is similar to that of arsenic, both shown in the figure below. The structures of arsenic and antimony are similar to the structure of graphite, covered later in this tutorial. Tellurium forms crystals that contain infinite spiral chains of tellurium atoms. Each atom in the chain bonds to two other atoms.

Watch the video below to explore a cubic diamond crystal structure.

(a) Arsenic and (b) antimony have a layered structure similar to that of (c) graphite, except that the layers are puckered rather than planar. (d) Elemental tellurium forms spiral chains.

Pure crystalline boron is transparent. The crystals consist of icosahedra, as shown in the figure below, with a boron atom at each corner. In the most common form of boron, the icosahedra pack together in a manner similar to the cubic closest packing of spheres. All boron-boron bonds within each icosahedron are identical and are approximately 176 pm in length. In the different forms of boron, there are different arrangements and connections between the icosahedra. 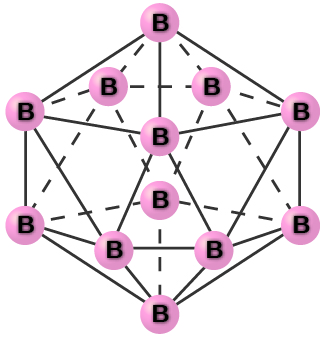 An icosahedron is a symmetrical, solid shape with 20 faces, each of which is an equilateral triangle. The faces meet at 12 corners.

The name silicon is derived from the Latin word for flint, silex. The metalloid silicon readily forms compounds containing Si-O-Si bonds, which are of prime importance in the mineral world. This bonding capability is in contrast to the nonmetal carbon, whose ability to form carbon-carbon bonds gives it prime importance in the plant and animal worlds.