However, alkali metal salts generally are very stable and do not decompose easily when heated. Alkali metal oxides result from the oxidation-reduction reactions created by heating nitrates or hydroxides with the metals. Equations for sample reactions are:

With the exception of mercury(II) oxide, it is possible to produce the oxides of the metals of groups 2–15 by burning the corresponding metal in air. The heaviest member of each group, the member for which the inert pair effect is most pronounced, forms an oxide in which the oxidation state of the metal ion is two less than the group oxidation state (inert pair effect).

Thus, Tl2O, PbO, and Bi2O3 form when burning thallium, lead, and bismuth, respectively. The oxides of the lighter members of each group exhibit the group oxidation state. For example, SnO2 forms from burning tin. Mercury(II) oxide, HgO, forms slowly when mercury is warmed below 500 °C; it decomposes at higher temperatures.

Burning the members of groups 1 and 2 in air is not a suitable way to form the oxides of these elements. These metals are reactive enough to combine with nitrogen in the air, so they form mixtures of oxides and ionic nitrides. Several also form peroxides or superoxides when heated in air.

Ionic oxides all contain the oxide ion, a very powerful hydrogen ion acceptor. With the exception of the very insoluble aluminum oxide, Al2O3, tin(IV), SnO2, and lead(IV), PbO2, the oxides of the representative metals react with acids to form salts. Some equations for these reactions are:

The oxides of the metals of groups 1 and 2 and of thallium(I) oxide react with water and form hydroxides. Examples of such reactions are:

Calcium oxide, sometimes called quicklime or lime in the industrial market, is very reactive, and its principal uses reflect its reactivity. Pure calcium oxide emits an intense white light when heated to a high temperature (as illustrated in the figure below). Blocks of calcium oxide heated by gas flames were the stage lights in theaters before electricity was available. This is the source of the phrase “in the limelight.”

Calcium oxide has many industrial uses. When it is heated at high temperatures, it emits an intense white light.

Calcium oxide and calcium hydroxide are inexpensive bases used extensively in chemical processing, although most of the useful products prepared from them do not contain calcium. Calcium oxide, CaO, is made by heating calcium carbonate, CaCO3, which is widely and inexpensively available as limestone or oyster shells:

Although this decomposition reaction is reversible, it is possible to obtain a 100% yield of CaO by allowing the CO2 to escape. It is possible to prepare calcium hydroxide by the familiar acid-base reaction of a soluble metal oxide with water:

Both CaO and Ca(OH)2 are useful as bases; they accept protons and neutralize acids.

Alumina (Al2O3) occurs in nature as the mineral corundum, a very hard substance used as an abrasive for grinding and polishing. Corundum is important to the jewelry trade as ruby and sapphire. The color of ruby is due to the presence of a small amount of chromium; other impurities produce the wide variety of colors possible for sapphires.

Artificial rubies and sapphires are now manufactured by melting aluminum oxide (melting point = 2050 °C) with small amounts of oxides to produce the desired colors and cooling the melt in such a way as to produce large crystals. Ruby lasers use synthetic ruby crystals.

Zinc oxide, ZnO, was a useful white paint pigment; however, pollutants tend to discolor the compound. The compound is also important in the manufacture of automobile tires and other rubber goods, and in the preparation of medicinal ointments. For example, zinc-oxide-based sunscreens, as shown in the figure below, help prevent sunburn. The zinc oxide in these sunscreens is present in the form of very small grains known as nanoparticles. Lead dioxide is a constituent of charged lead storage batteries. Lead(IV) tends to revert to the more stable lead(II) ion by gaining two electrons, so lead dioxide is a powerful oxidizing agent. 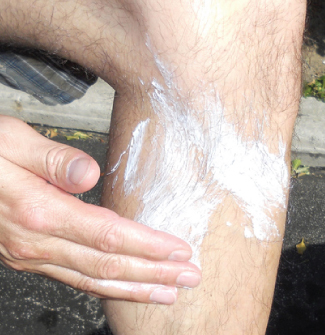 Peroxides and superoxides are strong oxidizers and are important in chemical processes. Hydrogen peroxide, H2O2, prepared from metal peroxides, is an important bleach and disinfectant. Peroxides and superoxides form when the metal or metal oxides of groups 1 and 2 react with pure oxygen at elevated temperatures. Sodium peroxide and the peroxides of calcium, strontium, and barium form by heating the corresponding metal or metal oxide in pure oxygen:

The peroxides of potassium, rubidium, and cesium can be prepared by heating the metal or its oxide in a carefully controlled amount of oxygen:

With an excess of oxygen, the superoxides KO2, RbO2, and CsO2 form. For example:

The stability of the peroxides and superoxides of the alkali metals increases as the size of the cation increases.

With the exception of beryllium and magnesium, the metals of groups 1 and 2 react with water to form hydroxides and hydrogen gas. Examples of such reactions include:

However, these reactions can be violent and dangerous; therefore, it is preferable to produce soluble metal hydroxides by the reaction of the respective oxide with water:

It is possible to prepare the insoluble hydroxides of beryllium, magnesium, and other representative metals by the addition of sodium hydroxide to a solution of a salt of the respective metal. The net ionic equations for the reactions involving a magnesium salt, an aluminum salt, and a zinc salt are:

(a) Mixing solutions of NaOH and Zn(NO3)2 produces a white precipitate of Zn(OH)2. (b) Addition of an excess of NaOH results in dissolution of the precipitate. (credit: modification of work by Mark Ott)

Industry uses large quantities of sodium hydroxide as a cheap, strong base. Sodium chloride is the starting material for the production of NaOH because NaCl is a less expensive starting material than the oxide. Sodium hydroxide is among the top 10 chemicals in production in the United States, and this production was almost entirely by electrolysis of solutions of sodium chloride. This process is the chlor-alkali process, and it is the primary method for producing chlorine.

Many of the applications of hydroxides are for the neutralization of acids (such as the antacid shown in the figure below) and for the preparation of oxides by thermal decomposition. An aqueous suspension of magnesium hydroxide constitutes the antacid milk of magnesia. Because of its ready availability (from the reaction of water with calcium oxide prepared by the decomposition of limestone, CaCO3), low cost, and activity, calcium hydroxide is used extensively in commercial applications needing a cheap, strong base. The reaction of hydroxides with appropriate acids is also used to prepare salts. 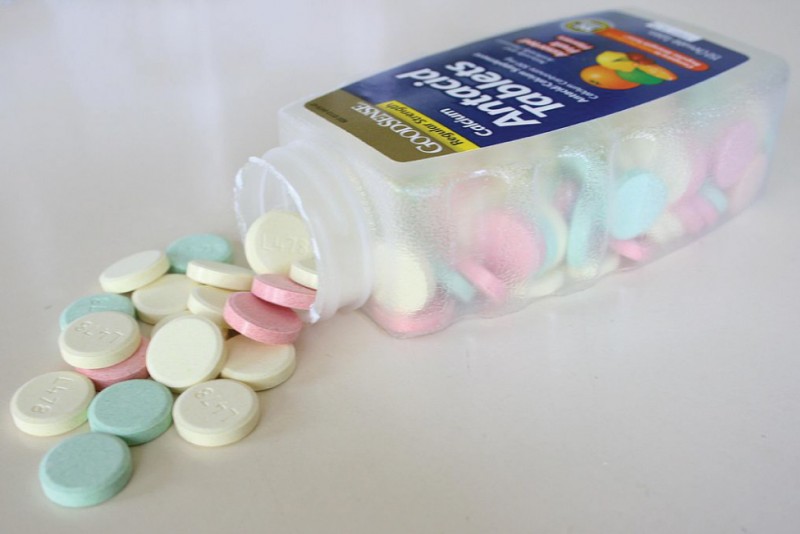 Calcium carbonate, CaCO3, can be consumed in the form of an antacid to neutralize the effects of acid in your stomach. (credit: “Midnightcomm”/Wikimedia Commons)