Occurrence, Preparation, and Compounds of Oxygen

Occurrence, Preparation, and Compounds of Oxygen

Oxygen is the most abundant element on the earth’s crust. The earth’s surface is composed of the crust, atmosphere, and hydrosphere. About 50% of the mass of the earth’s crust consists of oxygen (combined with other elements, principally silicon). Oxygen occurs as O2 molecules and, to a limited extent, as O3 (ozone) molecules in air. It forms about 20% of the mass of the air. About 89% of water by mass consists of combined oxygen. In combination with carbon, hydrogen, and nitrogen, oxygen is a large part of plants and animals.

Oxygen is a colorless, odorless, and tasteless gas at ordinary temperatures. It is slightly denser than air. Although it is only slightly soluble in water (49 mL of gas dissolves in 1 L at STP), oxygen’s solubility is very important to aquatic life.

Most of the oxygen isolated commercially comes from air and the remainder from the electrolysis of water. The separation of oxygen from air begins with cooling and compressing the air until it liquefies. As liquid air warms, oxygen with its higher boiling point (90 K) separates from nitrogen, which has a lower boiling point (77 K). It is possible to separate the other components of air at the same time based on differences in their boiling points.

Oxygen is essential in combustion processes such as the burning of fuels. Plants and animals use the oxygen from the air in respiration. The administration of oxygen-enriched air is an important medical practice when a patient is receiving an inadequate supply of oxygen because of shock, pneumonia, or some other illness.

The chemical industry employs oxygen for oxidizing many substances. A significant amount of oxygen produced commercially is important in the removal of carbon from iron during steel production. Large quantities of pure oxygen are also necessary in metal fabrication and in the cutting and welding of metals with oxyhydrogen and oxyacetylene torches.

Liquid oxygen is important to the space industry. It is an oxidizing agent in rocket engines. It is also the source of gaseous oxygen for life support in space.

As we know, oxygen is very important to life. The energy required for the maintenance of normal body functions in human beings and in other organisms comes from the slow oxidation of chemical compounds. Oxygen is the final oxidizing agent in these reactions. In humans, oxygen passes from the lungs into the blood, where it combines with hemoglobin, producing oxyhemoglobin.

In this form, blood transports the oxygen to tissues, where it is transferred to the tissues. The ultimate products are carbon dioxide and water. The blood carries the carbon dioxide through the veins to the lungs, where the blood releases the carbon dioxide and collects another supply of oxygen. Digestion and assimilation of food regenerate the materials consumed by oxidation in the body; the energy liberated is the same as if the food burned outside the body.

Green plants continually replenish the oxygen in the atmosphere by a process called photosynthesis. The products of photosynthesis may vary, but, in general, the process converts carbon dioxide and water into glucose (a sugar) and oxygen using the energy of light:

Thus, the oxygen that became carbon dioxide and water by the metabolic processes in plants and animals returns to the atmosphere by photosynthesis.

When dry oxygen is passed between two electrically charged plates, ozone (O3, illustrated in the figure below), an allotrope of oxygen possessing a distinctive odor, forms. The formation of ozone from oxygen is an endothermic reaction, in which the energy comes from an electrical discharge, heat, or ultraviolet light:

The sharp odor associated with sparking electrical equipment is due, in part, to ozone. 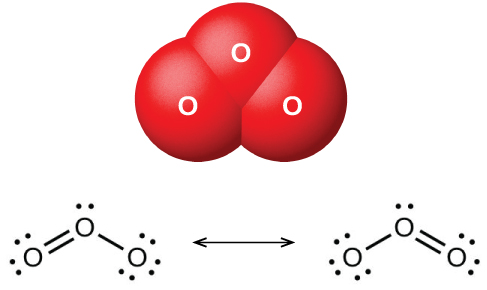 The image shows the bent ozone (O3) molecule and the resonance structures necessary to describe its bonding.

Ozone forms naturally in the upper atmosphere by the action of ultraviolet light from the sun on the oxygen there. Most atmospheric ozone occurs in the stratosphere, a layer of the atmosphere extending from about 10 to 50 kilometers above the earth’s surface. This ozone acts as a barrier to harmful ultraviolet light from the sun by absorbing it via a chemical decomposition reaction:

The reactive oxygen atoms recombine with molecular oxygen to complete the ozone cycle. The presence of stratospheric ozone decreases the frequency of skin cancer and other damaging effects of ultraviolet radiation. It has been clearly demonstrated that chlorofluorocarbons, CFCs (known commercially as Freons), which were present as aerosol propellants in spray cans and as refrigerants, caused depletion of ozone in the stratosphere.

This occurred because ultraviolet light also causes CFCs to decompose, producing atomic chlorine. The chlorine atoms react with ozone molecules, resulting in a net removal of O3 molecules from stratosphere. This process is explored in detail in our coverage of chemical kinetics.

There is a worldwide effort to reduce the amount of CFCs used commercially, and the ozone hole is already beginning to decrease in size as atmospheric concentrations of atomic chlorine decrease. While ozone in the stratosphere helps protect us, ozone in the troposphere is a problem. This ozone is a toxic component of photochemical smog.

The uses of ozone depend on its reactivity with other substances. It can be used as a bleaching agent for oils, waxes, fabrics, and starch: It oxidizes the colored compounds in these substances to colorless compounds. It is an alternative to chlorine as a disinfectant for water.