Chemistry » Metals, Metalloids, and Nonmetals » Structure and General Properties of the Metalloids

Occurrence, Preparation, and Compounds of Boron and Silicon

Occurrence, Preparation, and Compounds of Boron and Silicon

Boron constitutes less than 0.001% by weight of the earth’s crust. In nature, it only occurs in compounds with oxygen. Boron is widely distributed in volcanic regions as boric acid, B(OH)3, and in dry lake regions, including the desert areas of California, as borates and salts of boron oxyacids, such as borax, Na2B4O7⋅10H2O.

Elemental boron is chemically inert at room temperature, reacting with only fluorine and oxygen to form boron trifluoride, BF3, and boric oxide, B2O3, respectively. At higher temperatures, boron reacts with all nonmetals, except tellurium and the noble gases, and with nearly all metals; it oxidizes to B2O3 when heated with concentrated nitric or sulfuric acid. Boron does not react with nonoxidizing acids. Many boron compounds react readily with water to give boric acid, B(OH)3 (sometimes written as H3BO3).

An amorphous substance is a material that appears to be a solid, but does not have a long-range order like a true solid. Treatment with hydrochloric acid removes the magnesium oxide. Further purification of the boron begins with conversion of the impure boron into boron trichloride. The next step is to heat a mixture of boron trichloride and hydrogen:

Silicon makes up nearly one-fourth of the mass of the earth’s crust—second in abundance only to oxygen. The crust is composed almost entirely of minerals in which the silicon atoms are at the center of the silicon-oxygen tetrahedron, which connect in a variety of ways to produce, among other things, chains, layers, and three-dimensional frameworks. These minerals constitute the bulk of most common rocks, soil, and clays. In addition, materials such as bricks, ceramics, and glasses contain silicon compounds.

It is possible to produce silicon by the high-temperature reduction of silicon dioxide with strong reducing agents, such as carbon and magnesium:

Extremely pure silicon is necessary for the manufacture of semiconductor electronic devices. This process begins with the conversion of impure silicon into silicon tetrahalides, or silane (SiH4), followed by decomposition at high temperatures. Zone refining, illustrated in the figure below, completes the purification.

In this method, a rod of silicon is heated at one end by a heat source that produces a thin cross-section of molten silicon. Slowly lowering the rod through the heat source moves the molten zone from one end of the rod to other. As this thin, molten region moves, impurities in the silicon dissolve in the liquid silicon and move with the molten region. Ultimately, the impurities move to one end of the rod, which is then cut off. 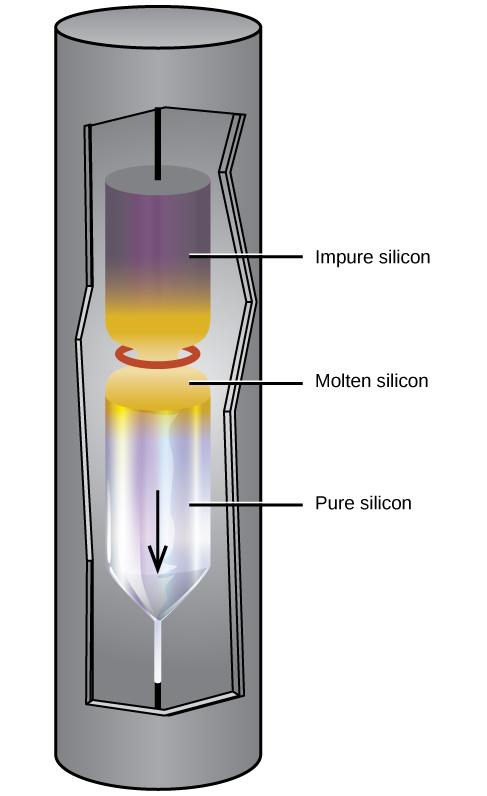 This highly purified silicon, containing no more than one part impurity per million parts of silicon, is the most important element in the computer industry. Pure silicon is necessary in semiconductor electronic devices such as transistors, computer chips, and solar cells.

Like some metals, passivation of silicon occurs due the formation of a very thin film of oxide (primarily silicon dioxide, SiO2). Silicon dioxide is soluble in hot aqueous base; thus, strong bases destroy the passivation. Removal of the passivation layer allows the base to dissolve the silicon, forming hydrogen gas and silicate anions. For example:

Silicon reacts with halogens at high temperatures, forming volatile tetrahalides, such as SiF4.

Unlike carbon, silicon does not readily form double or triple bonds. Silicon compounds of the general formula SiX4, where X is a highly electronegative group, can act as Lewis acids to form six-coordinate silicon. For example, silicon tetrafluoride, SiF4, reacts with sodium fluoride to yield Na2[SiF6], which contains the octahedral \({[{\text{SiF}}_{6}]}^{2-}\) ion in which silicon is sp3d2 hybridized:

Antimony reacts readily with stoichiometric amounts of fluorine, chlorine, bromine, or iodine, yielding trihalides or, with excess fluorine or chlorine, forming the pentahalides SbF5 and SbCl5. Depending on the stoichiometry, it forms antimony(III) sulfide, Sb2S3, or antimony(V) sulfide when heated with sulfur. As expected, the metallic nature of the element is greater than that of arsenic, which lies immediately above it in group 15.

Boron trihalides—BF3, BCl3, BBr3, and BI3—can be prepared by the direct reaction of the elements. These nonpolar molecules contain boron with sp2 hybridization and a trigonal planar molecular geometry. The fluoride and chloride compounds are colorless gasses, the bromide is a liquid, and the iodide is a white crystalline solid.

Except for boron trifluoride, the boron trihalides readily hydrolyze in water to form boric acid and the corresponding hydrohalic acid. Boron trichloride reacts according to the equation:

In this reaction, the BF3 molecule acts as the Lewis acid (electron pair acceptor) and accepts a pair of electrons from a fluoride ion:

All the tetrahalides of silicon, SiX4, have been prepared. Silicon tetrachloride can be prepared by direct chlorination at elevated temperatures or by heating silicon dioxide with chlorine and carbon:

Silicon tetrachloride is a covalent tetrahedral molecule, which is a nonpolar, low-boiling (57 °C), colorless liquid.

It is possible to prepare silicon tetrafluoride by the reaction of silicon dioxide with hydrofluoric acid:

Except for silicon tetrafluoride, silicon halides are extremely sensitive to water. Upon exposure to water, SiCl4 reacts rapidly with hydroxide groups, replacing all four chlorine atoms to produce unstable orthosilicic acid, Si(OH)4 or H4SiO4, which slowly decomposes into SiO2.

Boron and Silicon Oxides and Derivatives

Boron burns at 700 °C in oxygen, forming boric oxide, B2O3. Boric oxide is necessary for the production of heat-resistant borosilicate glass, like that shown in the figure below and certain optical glasses. Boric oxide dissolves in hot water to form boric acid, B(OH)3: 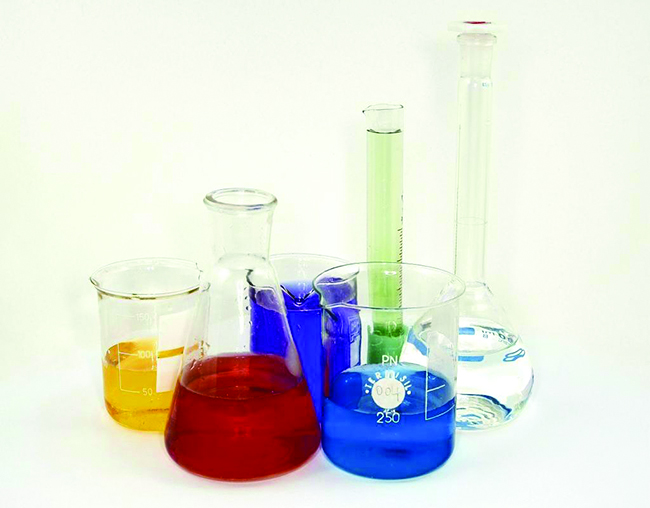 Laboratory glassware, such as Pyrex and Kimax, is made of borosilicate glass because it does not break when heated. The inclusion of borates in the glass helps to mediate the effects of thermal expansion and contraction. This reduces the likelihood of thermal shock, which causes silicate glass to crack upon rapid heating or cooling. (credit: “Tweenk”/Wikimedia Commons)

The boron atom in B(OH)3 is sp2 hybridized and is located at the center of an equilateral triangle with oxygen atoms at the corners. In solid B(OH)3, hydrogen bonding holds these triangular units together. Boric acid, shown in the figure below, is a very weak acid that does not act as a proton donor but rather as a Lewis acid, accepting an unshared pair of electrons from the Lewis base OH−: 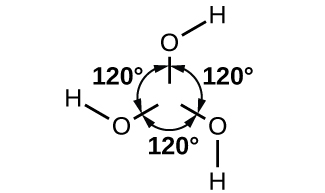 Boric acid has a planar structure with three –OH groups spread out equally at 120° angles from each other.

Borates are salts of the oxyacids of boron. Borates result from the reactions of a base with an oxyacid or from the fusion of boric acid or boric oxide with a metal oxide or hydroxide. Borate anions range from the simple trigonal planar \({\text{BO}}_{3}{}^{3-}\) ion to complex species containing chains and rings of three- and four-coordinated boron atoms.

The structures of the anions found in CaB2O4, K[B5O6(OH)4]⋅2H2O (commonly written KB5O8⋅4H2O) and Na2[B4O5(OH)4]⋅8H2O (commonly written Na2B4O7⋅10H2O) are shown in the figure below. Commercially, the most important borate is borax, Na2[B4O5(OH)4]⋅8H2O, which is an important component of some laundry detergents. Most of the supply of borax comes directly from dry lakes, such as Searles Lake in California, or is prepared from kernite, Na2B4O7⋅4H2O.

Silicon dioxide, silica, occurs in both crystalline and amorphous forms. The usual crystalline form of silicon dioxide is quartz, a hard, brittle, clear, colorless solid. It is useful in many ways—for architectural decorations, semiprecious jewels, and frequency control in radio transmitters. Silica takes many crystalline forms, or polymorphs, in nature. Trace amounts of Fe3+ in quartz give amethyst its characteristic purple color. The term quartz is also used for articles such as tubing and lenses that are manufactured from amorphous silica. Opal is a naturally occurring form of amorphous silica.

The contrast in structure and physical properties between silicon dioxide and carbon dioxide is interesting, as illustrated in the figure below. Solid carbon dioxide (dry ice) contains single CO2 molecules with each of the two oxygen atoms attached to the carbon atom by double bonds. Very weak intermolecular forces hold the molecules together in the crystal.

The volatility of dry ice reflect these weak forces between molecules. In contrast, silicon dioxide is a covalent network solid. In silicon dioxide, each silicon atom links to four oxygen atoms by single bonds directed toward the corners of a regular tetrahedron, and SiO4 tetrahedra share oxygen atoms. This arrangement gives a three dimensional, continuous, silicon-oxygen network. A quartz crystal is a macromolecule of silicon dioxide. 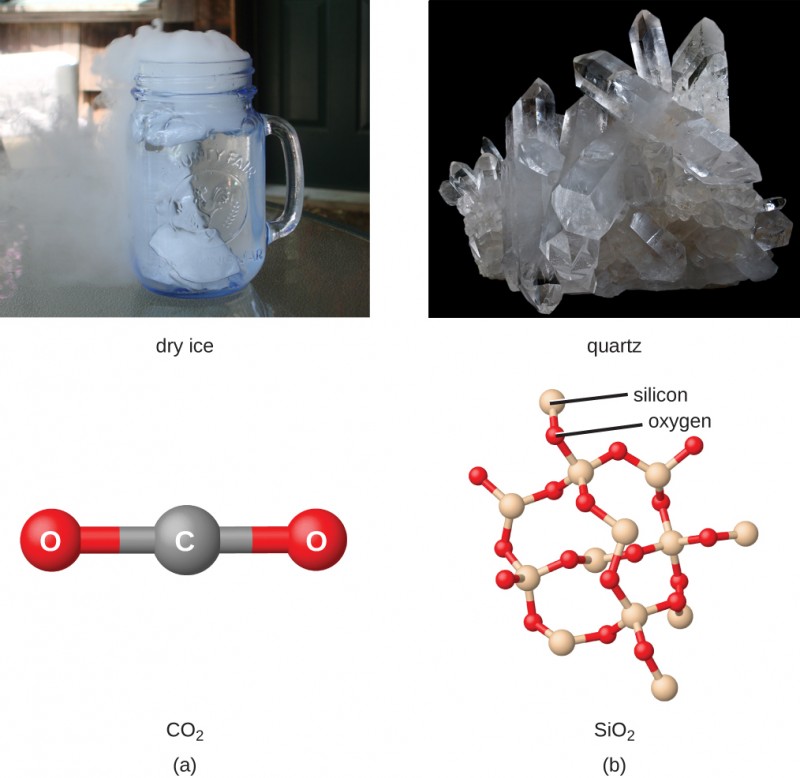 Because carbon tends to form double and triple bonds and silicon does not, (a) carbon dioxide is a discrete molecule with two C=O double bonds and (b) silicon dioxide is an infinite network of oxygen atoms bridging between silicon atoms with each silicon atom possessing four Si-O single bonds. (credit a photo: modification of work by Erica Gerdes; credit b photo: modification of work by Didier Descouens)

At 1600 °C, quartz melts to yield a viscous liquid. When the liquid cools, it does not crystallize readily but usually supercools and forms a glass, also called silica. The SiO4 tetrahedra in glassy silica have a random arrangement characteristic of supercooled liquids, and the glass has some very useful properties. Silica is highly transparent to both visible and ultraviolet light.

For this reason, it is important in the manufacture of lamps that give radiation rich in ultraviolet light and in certain optical instruments that operate with ultraviolet light. The coefficient of expansion of silica glass is very low; therefore, rapid temperature changes do not cause it to fracture. CorningWare and other ceramic cookware contain amorphous silica.

Silicates are salts containing anions composed of silicon and oxygen. In nearly all silicates, sp3-hybridized silicon atoms occur at the centers of tetrahedra with oxygen at the corners. There is a variation in the silicon-to-oxygen ratio that occurs because silicon-oxygen tetrahedra may exist as discrete, independent units or may share oxygen atoms at corners in a variety of ways. In addition, the presence of a variety of cations gives rise to the large number of silicate minerals.

Many ceramics are composed of silicates. By including small amounts of other compounds, it is possible to modify the physical properties of the silicate materials to produce ceramics with useful characteristics.