Commercial production of sulfur dioxide is from either burning sulfur or roasting sulfide ores such as ZnS, FeS2, and Cu2S in air. (Roasting, which forms the metal oxide, is the first step in the separation of many metals from their ores.) A convenient method for preparing sulfur dioxide in the laboratory is by the action of a strong acid on either sulfite salts containing the \({\text{SO}}_{3}{}^{2-}\) ion or hydrogen sulfite salts containing \({\text{HSO}}_{3}{}^{\text{−}}.\)

Sulfur dioxide is a gas at room temperature, and the SO2 molecule is bent. Sulfur trioxide melts at 17 °C and boils at 43 °C. In the vapor state, its molecules are single SO3 units (shown in the figure below), but in the solid state, SO3 exists in several polymeric forms. 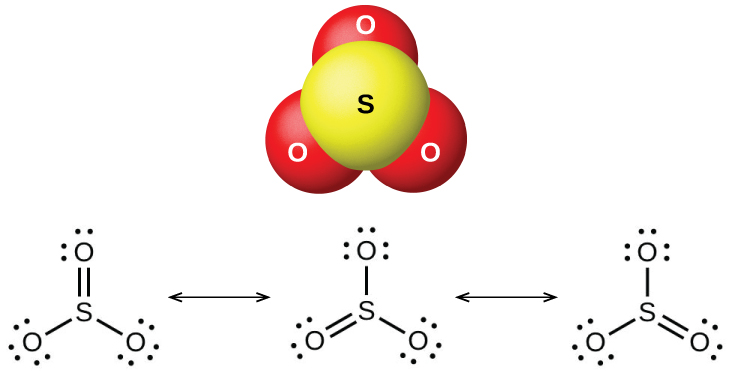 This image shows the structure (top) of sulfur trioxide in the gas phase and its resonance forms (bottom).

As a class, the oxides are extremely reactive and unstable, and their chemistry has little practical importance. Dichlorine oxide, formally called dichlorine monoxide, and chlorine dioxide, both shown in the figure below, are the only commercially important compounds. They are important as bleaching agents (for use with pulp and flour) and for water treatment.

This image shows the structures of the (a) Cl2O and (b) ClO2 molecules.