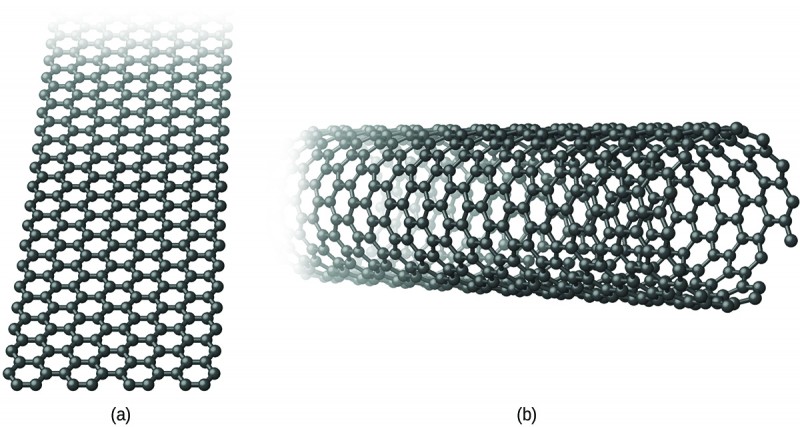 (a) Graphene and (b) carbon nanotubes are both allotropes of carbon.

Graphene is a very strong, lightweight, and efficient conductor of heat and electricity discovered in 2003. As in graphite, the carbon atoms form a layer of six-membered rings with sp2-hybridized carbon atoms at the corners. Resonance stabilizes the system and leads to its conductivity. Unlike graphite, there is no stacking of the layers to give a three-dimensional structure. Andre Geim and Kostya Novoselov at the University of Manchester won the 2010 Nobel Prize in Physics for their pioneering work characterizing graphene.

There currently are no commercial applications of graphene. However, its unusual properties, such as high electron mobility and thermal conductivity, should make it suitable for the manufacture of many advanced electronic devices and for thermal management applications.

Carbon nanotubes are carbon allotropes, which have a cylindrical structure. Like graphite and graphene, nanotubes consist of rings of sp2-hybridized carbon atoms. Unlike graphite and graphene, which occur in layers, the layers wrap into a tube and bond together to produce a stable structure. The walls of the tube may be one atom or multiple atoms thick.

Carbon nanotubes are extremely strong materials that are harder than diamond. Depending upon the shape of the nanotube, it may be a conductor or semiconductor. For some applications, the conducting form is preferable, whereas other applications utilize the semiconducting form.

The basis for the synthesis of carbon nanotubes is the generation of carbon atoms in a vacuum. It is possible to produce carbon atoms by an electrical discharge through graphite, vaporization of graphite with a laser, and the decomposition of a carbon compound.

The strength of carbon nanotubes will eventually lead to some of their most exciting applications, as a thread produced from several nanotubes will support enormous weight. However, the current applications only employ bulk nanotubes. The addition of nanotubes to polymers improves the mechanical, thermal, and electrical properties of the bulk material. There are currently nanotubes in some bicycle parts, skis, baseball bats, fishing rods, and surfboards.