Under normal conditions, hydrogen is relatively inactive chemically, but when heated, it enters into many chemical reactions.

It is possible to use hydrogen as a nonpolluting fuel. The reaction of hydrogen with oxygen is a very exothermic reaction, releasing 286 kJ of energy per mole of water formed. Hydrogen burns without explosion under controlled conditions. The oxygen-hydrogen torch, because of the high heat of combustion of hydrogen, can achieve temperatures up to 2800 °C. The hot flame of this torch is useful in cutting thick sheets of many metals. Liquid hydrogen is also an important rocket fuel (see the figure below). 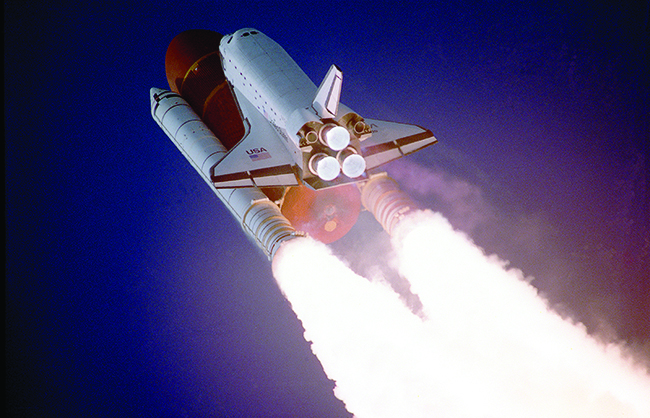 Before the fleet’s retirement in 2011, liquid hydrogen and liquid oxygen were used in the three main engines of a space shuttle. Two compartments in the large tank held these liquids until the shuttle was launched. (credit: “reynermedia”/Flickr)

An uncombined hydrogen atom consists of a nucleus and one valence electron in the 1s orbital. The n = 1 valence shell has a capacity for two electrons, and hydrogen can rightfully occupy two locations in the periodic table. It is possible to consider hydrogen a group 1 element because hydrogen can lose an electron to form the cation, H+.

It is also possible to consider hydrogen to be a group 17 element because it needs only one electron to fill its valence orbital to form a hydride ion, H−, or it can share an electron to form a single, covalent bond. In reality, hydrogen is a unique element that almost deserves its own location in the periodic table.

When heated, hydrogen reacts with the metals of group 1 and with Ca, Sr, and Ba (the more active metals in group 2). The compounds formed are crystalline, ionic hydrides that contain the hydride anion, H−, a strong reducing agent and a strong base, which reacts vigorously with water and other acids to form hydrogen gas.

The reactions of hydrogen with nonmetals generally produce acidic hydrogen compounds with hydrogen in the 1+ oxidation state. The reactions become more exothermic and vigorous as the electronegativity of the nonmetal increases. Hydrogen reacts with nitrogen and sulfur only when heated, but it reacts explosively with fluorine (forming HF) and, under some conditions, with chlorine (forming HCl). A mixture of hydrogen and oxygen explodes if ignited.

Because of the explosive nature of the reaction, it is necessary to exercise caution when handling hydrogen (or any other combustible gas) to avoid the formation of an explosive mixture in a confined space. Although most hydrides of the nonmetals are acidic, ammonia and phosphine (PH3) are very, very weak acids and generally function as bases. There is a summary of these reactions of hydrogen with the elements in the table below.

Hydrogen reduces the heated oxides of many metals, with the formation of the metal and water vapor. For example, passing hydrogen over heated CuO forms copper and water.

Hydrogen may also reduce the metal ions in some metal oxides to lower oxidation states: